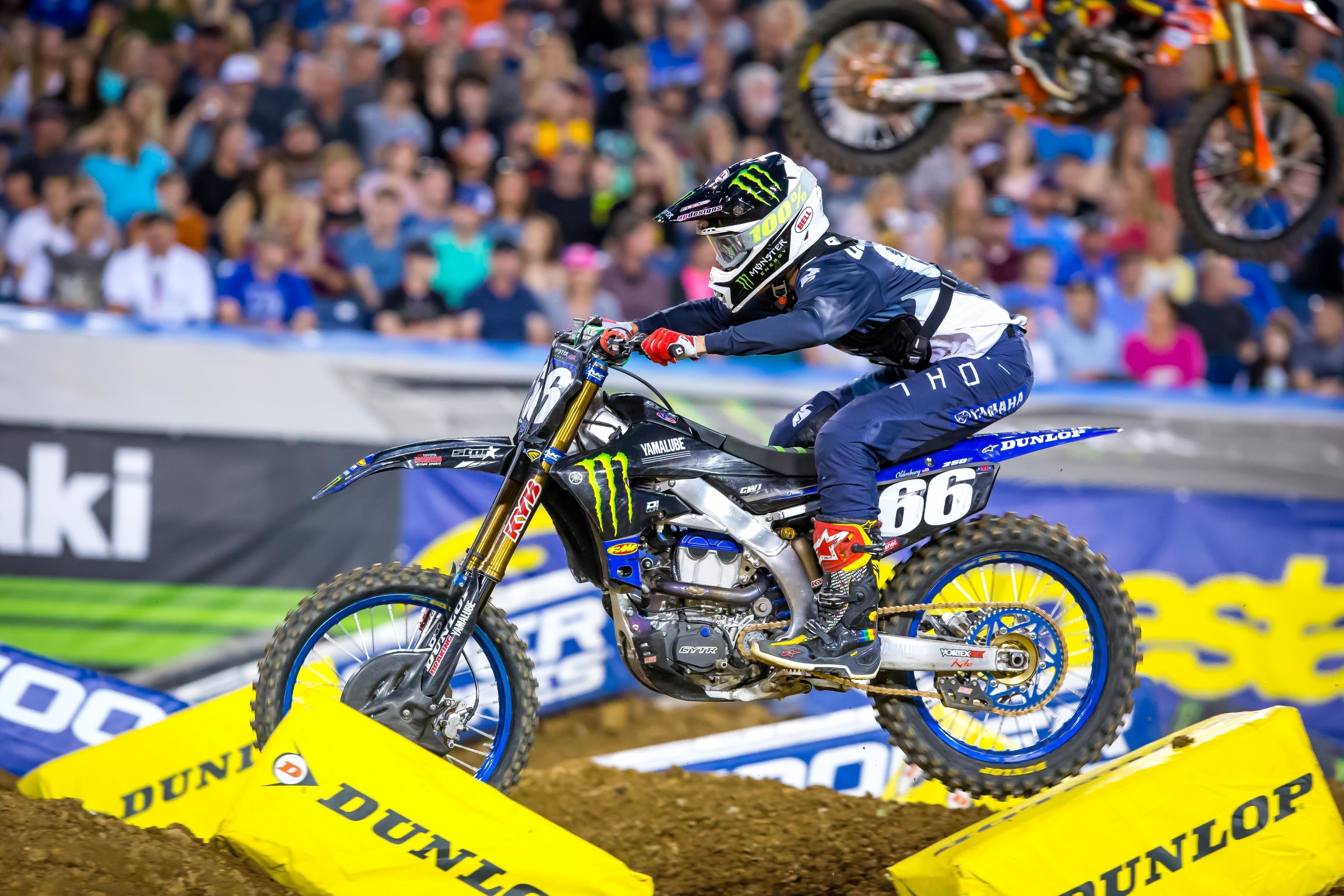 As soon as the Lucas Oil AMA Pro Motocross Championship ends in late August, most riders put the outdoor settings away and get back to work on supercross prep. The indoor calendar provides nearly four months of testing and prep time before January and Anaheim 1, while the motocross test season is much more tighter—riders have to get in motos during the week while still racing supercross on the weekend, because there are only 14 days between the Monster Energy AMA Supercross finale in Las Vegas on May 4 and the Lucas Oil AMA Pro Motocross Championship opener in Hangtown on May 19.

We asked a few riders at today’s press day in New Jersey how they deal with it.

Mitchell Oldenburg: We’ve been doing a lot. Two 35-minute outdoor motos every day that we ride, four days a week—Monday, Tuesday, Thursday, Friday. So we’ll ride outdoors Friday if our coast doesn’t have a supercross that weekend.

Justin Cooper: This week we just rode supercross Monday and Tuesday. I don’t know if we’ll do any outdoors next week, kind of depends where we’re at.

Oldenburg: We started right before Daytona just because Daytona is more like an outdoor.

Cooper: Yeah I did outdoors on supercross suspension before Daytona.

Do you have times when you ride outdoors one day and supercross the next?
Cooper: No. We’ll do outdoors the weeks we don’t have a supercross race, and do supercross when we have supercross.

Is it a hard adjustment?
Oldenburg: Going back to supercross isn’t bad because we’ve been on the test track since October, and you could do that with your eyes closed. Outdoors, you forget how big the tracks are. Supercross everything is coming at you so quickly, outdoors, I find myself slowing down early for the corner and realizing I could have went further.

What about the bike? I’ve heard everyone starts with stiff suspension because they want a supercross feel?
Cooper: I’m a horrible tester so I don’t know what’s going on! [Laughs]

Oldenburg: I would actually say we will end up going stiffer at the races, because the bumps at a national are so much bigger than a smooth track.

And Justin, you have no idea?
Cooper: Yeah I have no clue what I’m doing out there. I actually rely on the team. I just work with my suspension guy pretty hard, I’ll ask him, “Hey, what do you think? Anything look wrong?”

Oldenburg: They’re good at seeing things we can’t even feel.

So they will see something the bike is doing, make a change, and it feels better?
Oldenburg: Oh yeah.

So you never tell them what to change?
Oldenburg: I just tell them what I feel. It’s something I’m learning. I would always just leave it up to them, and looking back, maybe I would rely on them too much. It would have been good to know every change they made so I would know what to do the next time. In whoops, it’s so hard to know how they’re going to turn out. So it’s hard to get your bike to be right. Nashville I struggled a lot in the whoops, and then I’m wondering, “Is it me or the bike?” I didn’t have much growing up, I didn’t have anything I could change, so I knew it was on me.

Cooper: I don’t know what this guy is talking about. This is all easy! [Laughs]

Oldenburg: [Laughs] Hey, you know what? The first year I raced here [in New Jersey], I was straight privateer, it was just me and my brother and we didn’t know anything. Actually, we drove 24 hours to get here, we show up for sound test and the bike wouldn’t start. Can’t get it started. We pull it apart and it turns out the bike was about two seconds away from blowing up. So I ended up borrowing a bike and raced the next night!

From who?
Oldenburg: Jesse Wentland. He got hurt on Wednesday and couldn’t race. So I threw my suspension on it and raced!

And your numbers?
Oldenburg: Yup!

Did the bike feel any different than yours?
Oldenburg: Well, his motor was a lot better than mine!

Racer X: Have you been testing outdoors?
Chase Sexton: Yeah, the week before this, the team came down and we tested in Florida.

They brought the truck?
Sexton: No they just shipped tons of stuff. It was great, a lot better riding down in Florida than California. The track was super rough, roughest practice track I’ve ridden on in a while. RJ [Hampshire] came over since he’s from not that far away. The bike was pretty far off at first, because I tested in California the week before Nashville, and it felt okay. Then I tested the exact same thing in Florida and it was not even close to where it should have been. I believe it will be closer to the actual race tracks in Florida. In California, unless you find the exact right place on the right day, it’s hard to it rough enough. But you can make it happen in California, you just need to know what the bike feels like there, and how it will actually feel in the actual race. You can’t set it up for California.

So you have to, in our mind, know how the bike will feel when it’s rougher?
Yeah exactly. Kind of the same thing with supercross, you practice on a softer track and it might not work that great out there, but you have to know how that will actually feel on the race track.

Some 250 guys really aren’t very good at testing—a lot of them are new to it. You feel like you have this down pretty well?
I feel like I learned quite a bit, especially with Dan [Betley] as our team manager. Before, it was a little more, you got to choose what you ran, but you didn’t get to build it yourself. Riding with Ken [Roczen] helps a lot, too. He is really into testing and he’s really picky with his bike, and you should be, it’s what we race on. I’ve learned a lot and it’s cool to be around those guys, it’s helped me a lot, for sure.

You said on Instagram you’re making progress in supercross. What’s getting better?
Sexton: Yeah, I didn’t feel good for a few races there, I don’t know if it was the flu or what, but I was sick and kind of not myself. Nashville was good, and I’m feeling really good coming into this race.

Is it weird to be trying to focus on getting your first win, but also to be battling for the title at the same time?
Sexton: [Laughs] Yeah, it’s weird. I know guys have won a title without winning a race, I know Tim Ferry did it. It’s all about being consistent, and if I get the title that way, I get the title that way. But I’m just focusing on trying to win my first race, that’s been my goal all year anyway. Just get a good start, ride my own race. If I’m in the front, whatever happens behind me to everyone else, I can’t control anyway.

Justin Hill: I’m actually really motivated for outdoors this year. I usually have a good indoor season, so it’s not like I don’t care, but the risk/reward situation isn’t usually there for me outdoors. If I have had a good indoor season, then I’ve made bonuses, I’ve had good results, the outdoors is a way for me to keep riding and keep sharp. This year I’m really motivated for the 12-round series, though. Before Nashville I had already started outdoor testing, then I hurt my back and that set me back for about two weeks. Now, I’ve been pounding 40s. I went back to Oregon and rode my outdoor track on a stock bike. You know how that suspension is going hard on a rough track—I think I’m in pretty good shape. Even when I was hurt I was able to do the spin bike and get the cardio in. So I think it’s going to be good.