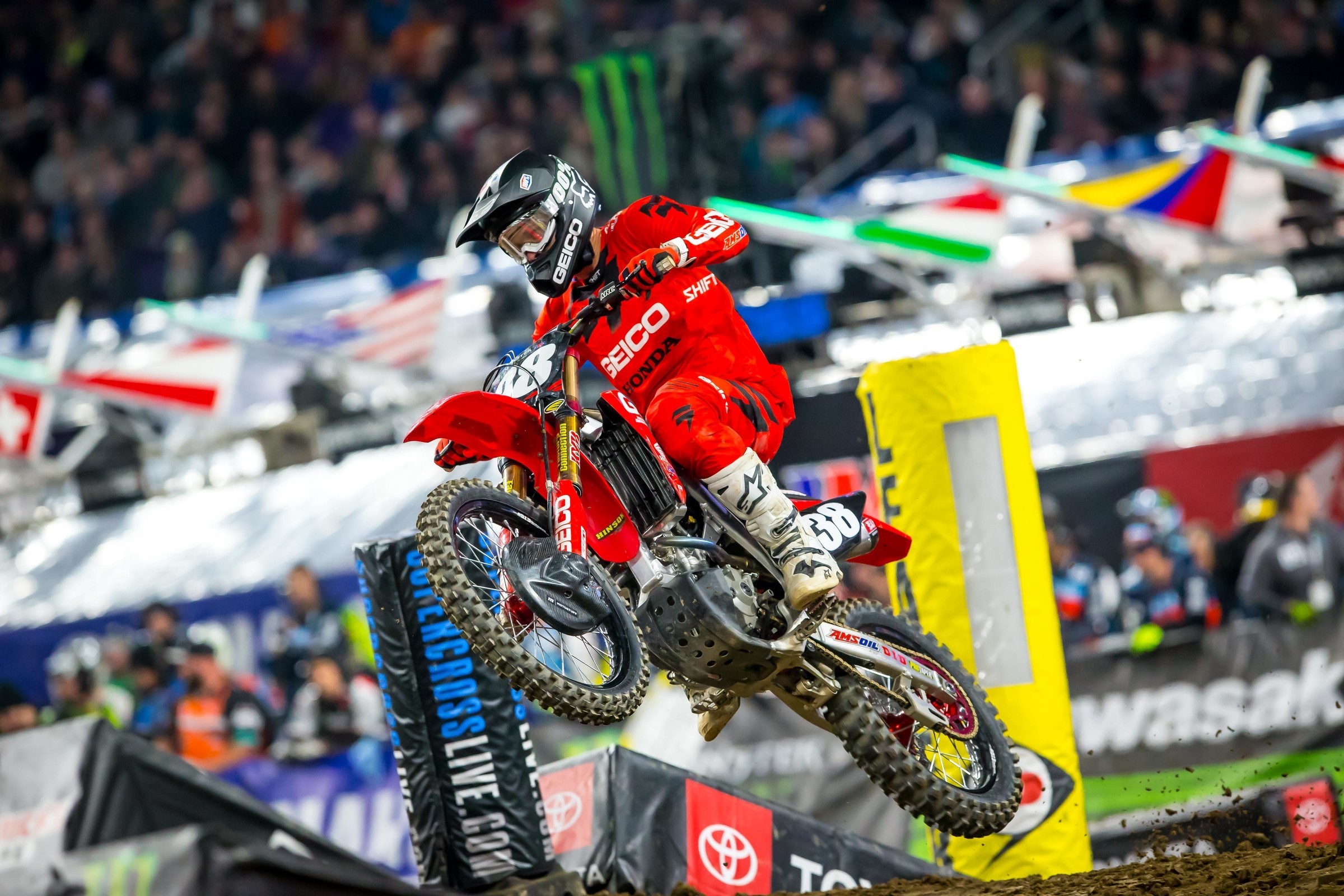 The 250SX East region saw a shakeup of titanic proportions when Monster Energy/Pro Circuit Kawasaki’s Austin Forkner, who’d been dominating the series, missed Nashville after injuring his knee during practice. As a result, his big lead was reduced to just three points over GEICO Honda’s Chase Sexton and seven over Monster Energy/Yamalub/Star Racing Yamaha’s Justin Cooper. The remaining questions are: just how bad is Forkner’s knee still, and how will it affect his ability to perform in East Rutherford? We know Forkner is capable of winning—he’s got five on the season—but if his knee slows him down it could be the opening Sexton or Cooper need to plot a winning course in the East Region. –Aaron Hansel

It’s not looking good for anyone who isn’t named Cooper Webb right now. With just two races left, despite Eli Tomac’s recent brilliance, Webb has 18 points on second place and 23 points on Marvin Musquin in third. In other words, his bid for a championship is looking awfully good, and there’s even chance he could clinch the championship this weekend. If he wins in East Rutherford he’d have more wins than anyone in the series no matter what, which means the championship can end with a tie between Webb and Tomac and Webb would still win. So, if Webb wins this weekend and Tomac finishes in fifth or worse, it’s curtains on the season. –Hansel

Tomac’s had his struggles this season, but he’s looked fantastic in the previous two races, not unlike the Tomac we’ve seen go streaking rampages in the past. It’s probably a little too late as far as the title is concerned, but that doesn’t mean Tomac doesn’t want to close the season out in the best way possible by winning the final two rounds, starting this weekend. If he does, it’ll mark the third straight season in which he’s won more races than anyone but hasn’t secured a title. -Hansel

When Justin Brayton got collected in a nasty crash in Seattle and left the stadium on the Alpinestars’ medical mule with a torn MCL and strained ACL, the initial thought was the he was done for the season. After all, those are pretty serious injuries, and he’d just landed on the stadium floor harder than a sack of Idaho Spuds heaved from the upper deck. But Brayton is apparently tougher than a pallet of pit bulls and has been back on the bike working on getting back to racing form. Look for Brayton to line back up again when racing reconvenes in East Rutherford. -Hansel

The Return of Craig

When Christian Craig fractured, then later dislocated, his thumb before the season started, he hoped he’d be ready to go for the beginning of the 250SX East Region in Minneapolis. Unfortunately the pain he endured in the race was simply too much, and Craig opted to take the necessary time to heal up properly. He’ll be back in East Rutherford though, and while he probably won’t be going for the win, he could help his teammate, Sexton, out if he’s able to finish in front of Forkner. We’ll see how it all plays out when the gate drops in MetLife Stadium. -Hansel

We all know Forkner is coming in banged up to face off against a healthy Sexton and Cooper. But what we don’t know is which Marty Davalos will show up this weekend. He helped his teammate in Nashville by taking the win and securing Forkner as the sole points leader. Could he come up big this weekend for Forkner again by stealing a podium over one, or both, of his title threats? Sexton will have his GEICO Honda teammate Christian Craig back on the gate this weekend and Cooper will have his fast counterpart Mitchell Oldenburg as well. We're not saying this is going to be one team taking out another the entire race, but when the situation calls for it, we might see the lower-in-the-points teammate help their title-chasing teammate. –Mitch Kendra

Rocky Mountain ATV/MC-KTM-WPS’ Blake Baggett finished inside the top five in Arlington (4), Detroit (5), Atlanta (2), Daytona (4), and Indianapolis (2) but had finishes of 7-8-2-6 in his last four rounds. While he isn’t in the championship hunt, he might be able to sneak into the top pack and score himself another podium—or even another win. His teammate Justin Bogle (not in the championship hunt either) earned his first heat win of the season and a fourth-place overall in Denver, tying his best finish since a muddy round five in San Diego. Bogle has gotten more comfortable on the bike, better starts, and is in better shape than when the season began. If he continues to progress these last two rounds, he could earn his first podium of the season. With a technical track this weekend, watch for the Rocky Mountain boys. –Kendra

Roczen and a Rollin’

Honda HRC’s Ken Roczen was super fast all day in Nashville; he qualified fastest in 450SX, and crushed the whoop section. But he was in the wrong place at the wrong time as Monster Energy Kawasaki’s Joey Savatgy tipped over, causing Roczen’s night to go south quickly as well. He didn’t have a great night in Denver as he finished seventh, but he hasn’t given up on the season just yet. He’s almost two full races back in the points standings but a win would go a long way, especially with the start of the Lucas Oil AMA Pro Motocross Championship approaching. Can Roczen get his first win of the season this weekend? –Kendra

Not Your Typical Football Stadium Layout

While the 16th round of Monster Energy AMA Supercross returns to race at MetLife Stadium— yet another football stadium—this weekend, East Rutherford isn’t your typical football stadium track. The track takes a unique approach as riders will face a large double that sends them over the end of the start straight—similar to the ones at Anaheim 1. This section might cause trouble in both classes as 250SX riders will have to fully commit to the jump to clear it but will have to watch for block passes leading into it (as JT warned us about yesterday). The layout includes two whoop sections separated by a long run down the starting straight. If the dirt is anything like it usually is in New Jersey, they will more than likely become jumpers instead of blitzers. With the tightness and scale of the jumps, look for solid technical riders to do well this weekend. –Kendra

The action will start sooner than normal this weekend, as opening ceremonies will take place at 4:30 p.m. ET and the first 250SX heat will begin at about 5 p.m. Weather might be a factor tomorrow, as MetLife Stadium is an open-roof venue. We saw the covered track last night as Giants fans watched the NFL draft from inside the stadium and rain is expected throughout today, but at the time of posting it appears the rain might hold off tomorrow. We saw some crazy happenings at East Rutherford the last time the championship stopped in MetLife in 2017—Marv moving over for the Dunge and the craziness of the 450SX semis and LCQ—and it seems tomorrow’s day show might have its own story to tell. For more information on the schedule, click here. –Kendra