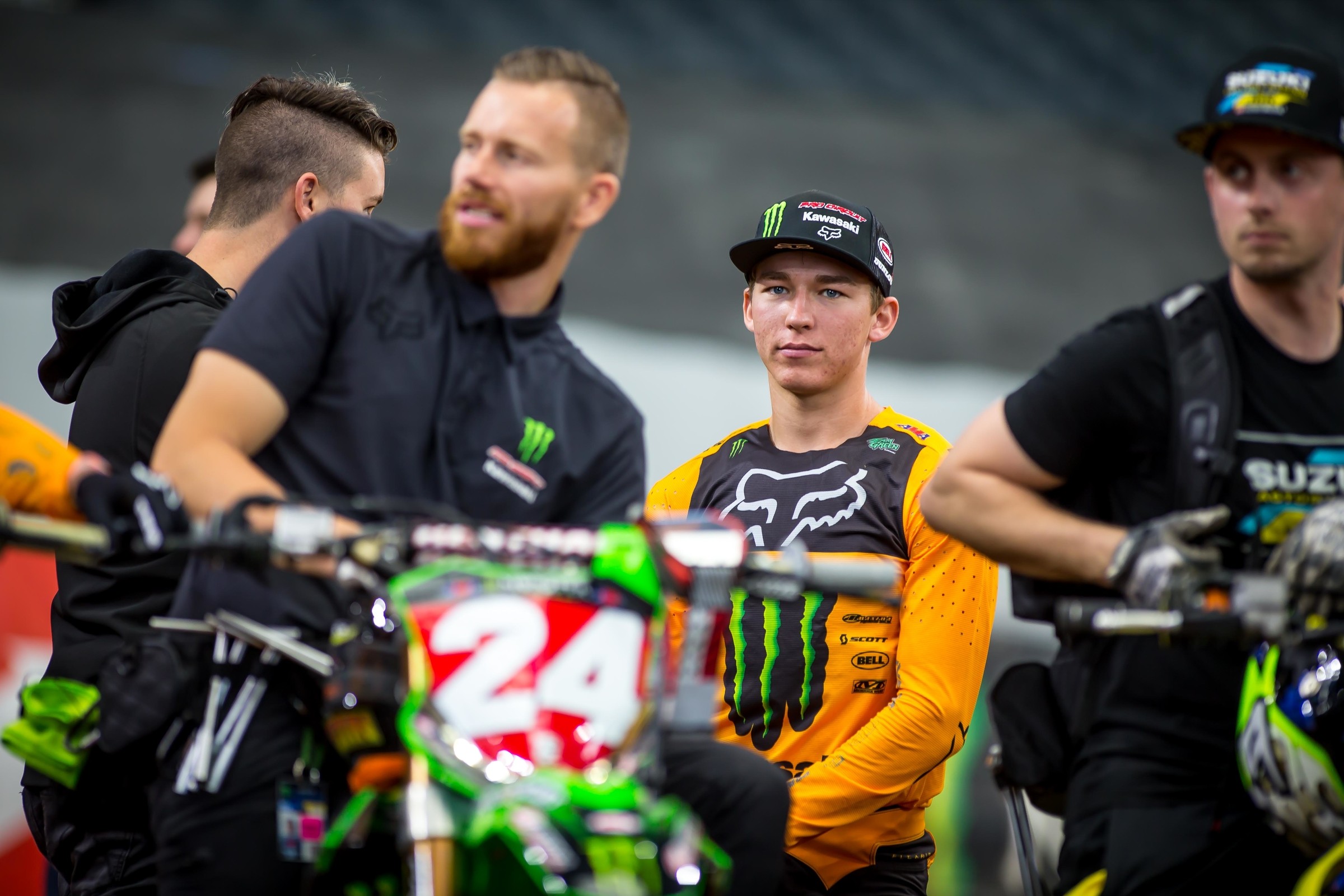 As soon as Austin Forkner was seen limping away from the Monster Energy/Pro Circuit Kawasaki truck on crutches following a crash in qualifying, it seemed like his fate was sealed. At the time, Austin could only speak about not racing that night in Nashville, as it would take more tests and an MRI back home before he really knew the extent of the damage, but most of it was pretty obvious. Hobbled on crutches, not able to go, it wasn’t a good sign for the rest of the season.

Luck was on Forkner’s side, though, with a three-week break in 250SX East Region action giving him the gift of time. We talked to Kawasaki Racing’s Bruce Stjernstrom over the weekend in Denver and he indicated to us that Forkner has, what he called, an “ACL problem,” which, we can interpret fairly clearly as a torn ACL. That’s not the end of it, though. An NBA player or an NFL running back simply can’t play with a torn ACL. Stjernstom pointed out to us that there’s probably ten guys on any given night in a supercross on the starting gate with torn ACLs. Forkner’s teammate Adam Cianciarulo went through most of the 2017 season (half of supercross and all of Lucas Oil AMA Pro Motocross) and the 2018 supercross season without one, just as an example. There are plenty more.

The key for Forkner’s quick recovery is actually getting a handle on the bone bruising and swelling that results from the injury. Stjernstom says Forkner has been doing double therapy sessions to try to get that under control, because the bone bruise is actually where a lot of the pain comes from. If he can get that in check, the pain won’t be as bad, meaning it’s just a matter of stability. Expect lots of taping and knee brace experimentation for Forkner at the race next weekend in East Rutherford.

That’s because Forkner plans to be there. This won’t be a game-time decision, as Forkner is expected to race. The only question is how he will perform, and if he can avoid catching the knee, twisting it, or making it worse. At Nashville, Forkner’s pain level was so bad that the team feared if he tried to race, he’d basically be doing it on one leg, and the risk of another crash and injury was too high. The whoops are especially treacherous with bone bruising, because the knee takes such a pounding. If they can get the bone bruising and swelling under control for East Rutherford, he might be okay. Remember, he holds just a three-point lead over Chase Sexton and seven over Justin Cooper, so Forkner has to do more than just race in East Rutherford, he needs to finish ahead of his rivals.

As always, time will tell, but at least this time Forkner has some time on his side. Is three weeks enough? It’s going to be one heck of a challenge.