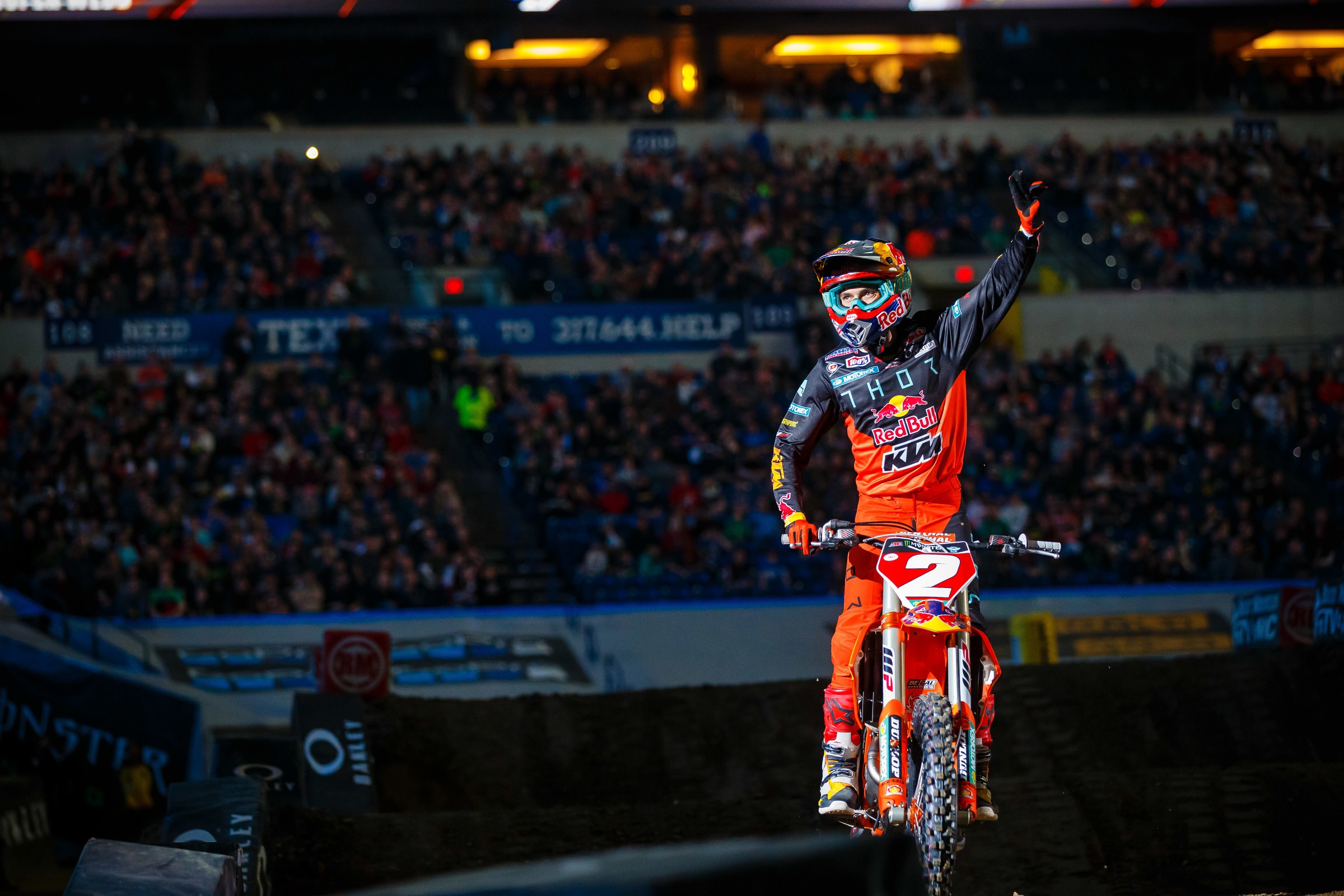 Only three rounds remain in the 2019 Monster Energy AMA Supercross season and in 450SX Red Bull KTM’s Cooper Webb has a 21-point gap over teammate Marvin Musquin and Monster Energy Kawasaki’s Eli Tomac, who are tied for second in points.

For this week’s 3 on 3, we corralled our guys and asked them who they thought would win their respective class and why. Here’s what Jason Thomas, Steve Matthes, and Jason Weigandt had to say.

Jason Thomas: I have been fighting it, but Webb has this locked up. I don't even think it's been so much what Webb has done lately, it's been more about the other guys leaving points on the table. There has been opportunity after opportunity, but they just aren't being seized. Webb is staying consistent and will be able to cruise into his first 450 title in Vegas.

Steve Matthes: Well, this weekend is Eli's home race, it's at altitude, and he'll be feeling good. So ET3 might pull off another win and bring this thing a little closer but in the end, it's Webb's to take home. What an amazing development that will be, right? He's ridden great, gotten just about all the starts when he's needed to, and then caught the usual breaks along the way as well. When it's your year, it's your year. Great story right here.

Jason Weigandt: If I said something crazy will have to happen and Webb won't win this title, and then something crazy does happen and he actually doesn't win it, I'll look like a damned genius. I'll make fun of everyone who said it was over, I'll forever taunt that I was the ONLY one who knew a 21-point lead with three races to go wasn't enough. I'd be so smart if this somehow actually happened.

Hey! Remember what happened to Jason Anderson's wheel last year? He lost a ton of points! That could happen to Webb! It's not over!

(P.S. I really don't expect something like that to happen but if it does YOU HEARD IT HERE FIRST).

Thomas: I think AC92 will find a way to halt the Ferrandis charge. Cianciarulo has won Vegas the last two years and seems to jell with that dirt and environment. If it's a toss-up heading into the desert, I have to like his chances based on his 2017 and 2018 wins.

Matthes: I like Adam to bring this home but as usual with him, he'll make it more interesting than it should be. His record in Vegas at the Showdown is strong and he's got the points lead (although not a big one) so he can be a bit safe while Dylan has to send it a bit, you know? If Adam doesn't get the title the whole 2020 silly season could be thrown into chaos as he may want to stay down one more year to try and get a title before he moves up. If he gets this, he may feel like he's checked something off and will go to the 450 class.

Weigandt: Adam's speed is great, but I don't think Ferrandis is lacking in that department. Most qualifying sessions this year have been back-and-forth between these two, and the real reason AC had a solid points lead at one point was because—wait for it.... wait for it—he was actually executing better than Dylan. I know, Adam is known as the dude who has all this speed but can't put it together consistently, but, Ferrandis was doing even worse in that department, by either getting bad starts on the nights he rode well, or not riding well when he actually got a good start.

Once Ferrandis finally broke through and got that first win, guess what? The next one came easy. That's how this works. He's figured it out and he's always been fast enough to win this, so now he has the full package.

The only real difference here is that Adam has a five-point lead. He's a better starter, too, but once you're down to two races that's down to random selection. The only edge is the five points, and that's a nice head start in a two-race series. I'll use that as my tie breaker.

Who wins the 250SX West Region?

Thomas: I think Sexton is now the man to beat. Forkner might be able to ride in East Rutherford but I don't think it will be at a level that can beat Sexton. The margin of difference between the two was fairly small to begin with and a serious knee injury changes that significantly in my mind. I finished SX seasons with a torn ACL in 2004 and again in 2011. Both were a big handicap to deal with and it wasn't manageable for a month or two, and even then, it's hard to say if I was at the same level as before the injury. If Forkner had four to six weeks to rehab and adapt, I might feel differently. There is a chance, of course, that Forkner's injury isn't as serious as I think it is and he can get close to 100 percent by East Rutherford. I think it's going to be tough sledding, though.

Matthes: I like Sexton to bring this home. I'm hearing it's ACL and meniscus for Forkner and that will be hard to ride through. Which is terrible news for him and the team, he's been the dominant rider on the coast. Could Sexton pull off a "Tim Ferry" and win a title without winning a race? Because Marty could be back! And then we have the East/West Showdown. I think Chase will do enough in the last two races to win the title. Sucks for Austin and the Pro Circuit guys but hey, that’s racing.

Weigandt: Yeah, this is going to be so hard on Forkner. He not only has to show up for these races he has to actually beat Sexton and Cooper in them, because his points lead is too small to coast. That's a really tall order. Sexton hasn't won a race yet, but he's been rock-solid consistent this year and last year in supercross. I think he would have to blow this to not win it and I don't think he's the kind of guy who will blow it.

Who wins the 250SX East Region?