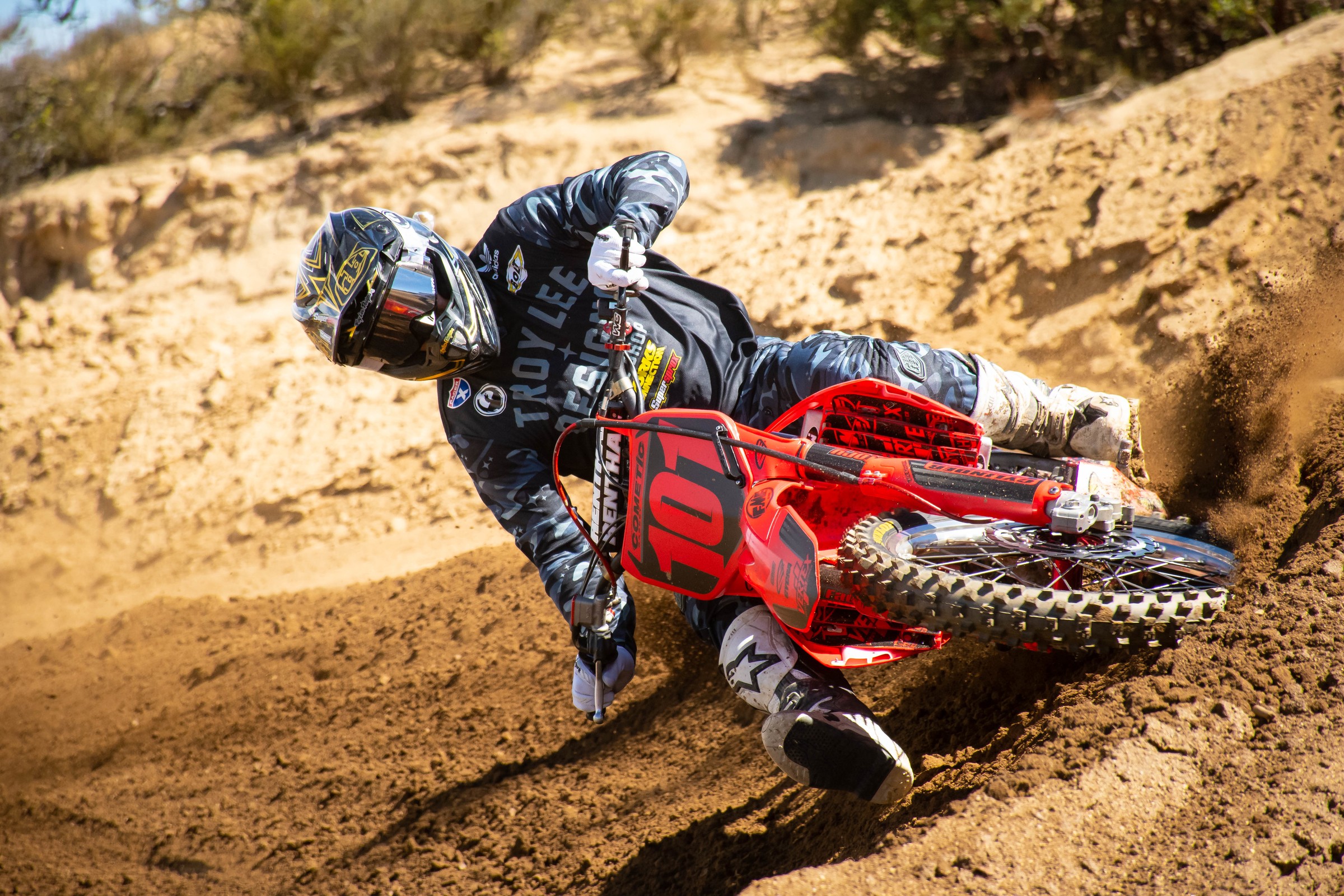 No sarcastic intro telling you how great you are, I'll just get right to the point. Do you think the 450 is too powerful, too heavy, and just too much of a bike for the sport of mx and sx? It seems like the 250F is more suitable to the courses of mx and sx. I personally think around 45hp would be the perfect amount of power for the premier class. Weight and affordability should be the goal of manufactures not more power, heavier, and more expensive machines. We have exceeded the threshold of the body and the demographic of the market. Evolution does eliminate species sometimes.

I do think the 450 is too much bike. And, honestly, I think most of the industry knows it too. The mistake that was made by the AMA and the other powers-that-be, back when the first four-strokes were making their ways to the test tracks, has left an indelible mark on our sport. If you look back at 2002, the year before the first 250F hit the track, and the cost of bikes and racing compared to now, its frightening. Then compare the weight of machines we were racing on and the horsepower difference between the two. Factory 250F’s are almost making what factory 250 two-strokes were making then. Top it off with how much easier these modern bikes are to ride and you have a formula for disaster. Riders with less ability are able to go faster and jump further without the technical ability to correct a mistake. That all equates to bigger crashes with more severe consequences.

And the racing has suffered as well. Go back and watch some of the racing from the 1990s and early 2000s and tell me the battles weren’t closer and much more aggressive; you simply can’t race a 70 horsepower behemoth with the torque numbers of a John Deere tractor the same way you could ride a 125 or 250 two-stroke. The problem is that we’ve gone so far down this road we can’t ever go back.

Do you really believe that Honda will produce a two-stroke motor again? I’m as excited about the 125cc All Star rounds as anybody but it won’t change the direction of the manufacturers in terms of production models. The next big change they make will be to electric, for better or worse. Let’s hope they don’t get that wrong and really crush the sport we all love so much.

Been a long-time fan of the sport and love your columns and insights. Also just started listening to your show, The Whiskey Throttle Show, with GL and love it.  Thanks for diving in deep.

Two questions: First, I recently listened to your show with Ryan Hughes, great content. I noticed how he mentioned yoga and how he thinks that is a great compliment to riding, but seems like you poo-pooed that idea. I have to disagree with your enthusiasm on this subject. I've raced dirt bikes (a pretty fast snail in my day), played football, bodybuilding...and I have to say, a fully committed yoga practice is no joke, in fact the hardest physical endeavor I've ever done. Do you know of Ashtanga yoga? Primary, intermediate, advanced series? Forget about leg warmers and Prana tights...the core strength and overall physical/mental stability of these series is unmatched in my opinion. It brings in a whole different dimension to balance and awareness, I'm surprised I don't hear of this more in our sport. With all the talk of the mentality side of performance, why don't some of the riders/trainers enlist in more yoga & meditation?

Secondly, are you and Josh Hill having a mustache contest? Hmm. At least my burley neighbor thinks you're hot.

Keep up the good work!

First, the mustache is officially in hibernation for the summer so all the haters can holster their keyboard fingers until next Stache-Tober. Please apologize to your neighbor for me.

Second, I think you should go back and listen to our conversation again because I wasn’t poo-pooing yoga at all! In fact, I told him we’ve been integrating it into our fitness routine at the fire station and it’s currently kicking my ass. I don’t get into the religious rubbish of it all (you can keep your namaste’s and Om’s), but the flexibility, concentration, and strength it takes to hold poses is a benefit to any athlete or sedentary person looking to improve their health. In fact, as we mentioned on the show, Aldon Baker has all of his athletes utilize yoga as part of their training in Florida and his guys have done a fair bit of winning over the years.

Thanks for writing in and please send tips on how to hold the wheel pose.

I see the 125 race is going to all 12 rounds this year! Thanks to Ping and the whole Racer X staff for all you guys do to keep the promoters aware of what the sport needs and wants. Good on you folks! I saw the mechanics of some teams modifying the tires on the bikes with a tool at some rounds. Does this make the Dunlop techs cringe, or make them think about testing this technique out to validate how well it works? It kind of looks like a trials tire by the time they get done with it… maybe a new tread pattern in the work? I do love to see teams looking and trying stuff out of the box for an advantage. Should I get a tire ripper tool for the tool box? Need some help on wet roots in the woods!

Yes, pretty stoked that the MX Sports crew is listening to the fans of the sport and trying to walk the line between keeping the manufacturers from throwing a fit and bringing quality entertainment. Looking forward to hearing/smelling that sweet sound/tone of crispy 125’s on the line.

Race teams have been grooving tires for decades. Typically, this is done on very hard pack tracks where the rider wants to get an extra edge on the knobby to bite a little better without going to a hard-pack tire that has more shallow knobs. The Dunlop Geomax MX33 is the gold standard right now when it comes to tires and it has a very aggressive, tall knob. So, in order to keep the same general characteristic but add a little more flex and “bite” on the hard track or off the metal grate maybe, teams have played with cutting a groove across the top of the center knob. I’ll date myself here but I remember doing this to the Dunlop 695 tire (paired with a 490 front) for supercross. I even used the tire groover to cut a fresh edge into the front of some of my practice bike tires back in the day to get some extra miles out of them. I don’t think Broc and the Dunlop guys get upset because it is likely they spoke with them before doing it.

This might help you a little in the woods but if you really want good bite get yourself a gummy trials tire from Dunlop. You stick like glue; it’s unreal.