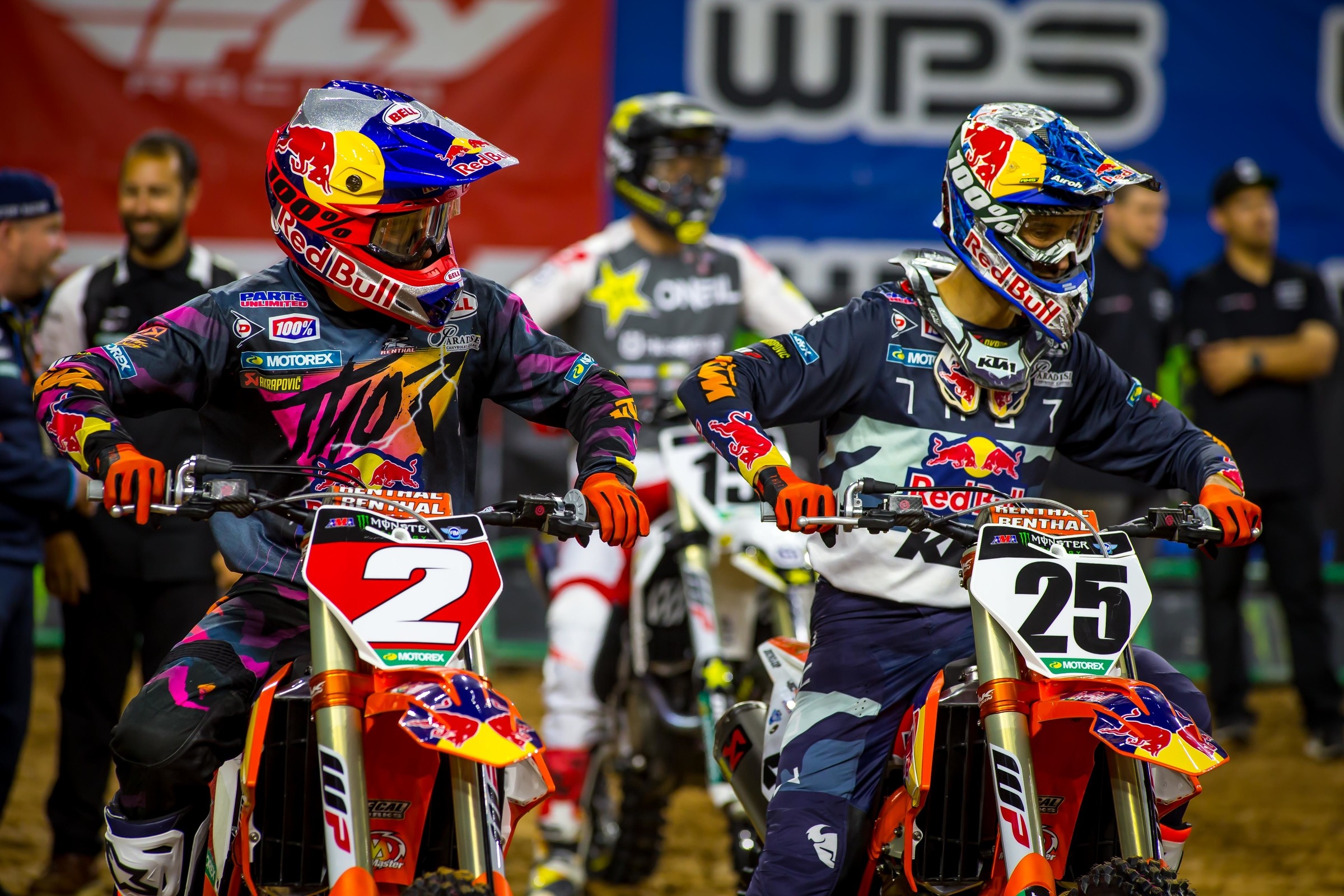 So much to unpack with Cooper Webb versus Marvin Musquin early in Houston’s first 450SX main event on Saturday night. The world is always bracing for friction inside Aldon Baker’s camp, which asks top riders—and once again the riders 1-2 in the championship standings—to ride and train together throughout the week. This has been discussed ad nauseam. Webb, he of the fiery temper and mind games of the past, has done a good job indoctrinating himself into this crew, smoothing his rough edges, and playing nice with his new ‘mates.

Then Marvin jumped to the inside in a corner early in Houston, Webb got him back, then Marvin attacked on the inside again. None of the moves were out of hand, but it was enough to light Webb’s fuse, and we got a reminder of what he’s capable of doing when he’s angry. Marvin has been quick the last few weeks, but he wasn’t quick enough to get away from a pissed-off Webb, who took not one, not two, but THREE shots at Marvin on the inside, trying to rough up his teammate and make something happen. Something finally did happen on that third attempt, when Cooper wedged inside Musquin going into the sand wall and sent his teammate off the track. The move itself wasn’t very crazy in isolation, but when you factor in Cooper bumping Marvin two other times before it, then it becomes clear that Webb was riding with anger.

It took Marvin a while to reset his night. Several mistakes, crashes, and off-track excursions followed—not all his fault—but even when he returned to win the third race, it added another chapter to the same story we’ve seen so many times this year: Marvin can go just as fast as Cooper, but Cooper does a better job managing the race, getting starts, and avoiding mistakes. Hence, he earned his sixth win of the year in Houston. Even bigger, it stretches his points lead to 17 with four races to go, instead of 14 with five which was the case heading to Texas. That’s significant, and it all started with his aggressive moves in that first race. That, right there, is how Webb beat Marvin in Houston.

Now, the old Cooper Webb would have poured salt on the wounds via trash talk post-race, letting his competitors know that if they don’t like getting pushed off the track, then they should stay away or he will do it again. The 2019 version of Webb re-entered the picture, though, and started apologizing.

“Like Marv said, it gets intense,” Webb answered. “We were definitely racing aggressively and I got frustrated and let it affect that. That’s not the way to do it, for sure. I think we let Ken [Roczen], obviously, get away, and the other guys catch us so I’ll learn from it for sure. I’ll try to contain the emotions a little bit better. Like Marv said, we are teammates and training partners, but we are one and two in the championship, so it’s a tough line. I made some mistakes and got a little frustrated. I’ll learn from it and be better moving forward.”

I have no doubt that Cooper got a talking to after that first race from someone in his camp—his mechanic Carlos Rivera, or Baker, or team manager Ian Harrison or Roger DeCoster, motorsports director KTM/Husqvarna North America. The KTM group keeps telling him not to race angry because they see nothing but negatives in the big picture. Forget the drama of two teammates hating on each other, just leave that aside. Bottom line is everyone got smoked by Roczen in the first race. That’s the point the crew always tries to make with Cooper: just race forward, don’t waste time, energy or thoughts on the other stuff.

As an example, here’s something Decoster told me two months ago, in Minneapolis:

“We want the rider to spend his energy riding the track as good as he can and not on things that don’t have anything to do with racing,” he said. “The guys race in a close environment, sometimes you touch each other and it’s not always intentional. But if you get guys with the same character, they get fired up. And it’s okay to get fired up, and we don’t want him to lose that, but you have to use it the right way.”

Fitting, eh? DeCoster says that’s one of the main reasons to pair Webb with Rivera, the wrench who worked with Ryan Dungey, who never went down the rabbit hole of aggressive riding.

So Webb, having been told the fisticuffs led him to finish a distant second to Roczen, decided to calm down. But what about Musquin?

“It’s always very intense in the Triple Crown. The races are shorter and everyone is pushing really hard,” he said. “I made the pass right away in the first left-hander but unfortunately I went through the whoops in second gear so I couldn’t get a good drive. I got passed, but then made a good pass on Cooper. I think I was running second or third and was in a good position. Everyone was pushing hard behind him, and obviously Cooper is very aggressive. He pushed me off the track and I lost some time. I showed some good speed, but in the Triple Crown you have to be consistent for three main events. Unfortunately it’s not always the fastest guy who wins the overall. I never touched Cooper, and we’ll see what happens in the next few rounds. It’s definitely not my intention to do stuff like that. He’s my competition, but also my teammate. We’ll see how it goes.”

Musquin, then, never really threatened retaliation for the future, but at least left the option open just to make it clear he can’t be punked without any repercussions. Maybe he will take advantage if he finds himself with the chance for payback, but it’s not a guarantee. Further, I’d offer that if the season gets into a battle on on-track aggression, Webb is better at playing that game than most. As long as KTM can tell both riders, “In the race where you got into it with each other, Ken Roczen won,” they have leverage to get their riders to keep it clean at the races. However, there’s the other issue of working together during the week. Once again, the team will preach how working together helps them both hold off the competition.

“We always talk about it with Aldon, it’s not easy we have the same program and same trainer. At the end the we push each other on the track down in Florida and it will help us, so, I think there is no issue so far,” said Musquin.

“I agree, it is tough and it makes you question a lot, but it’s, like he said, we’re 1-2 right now and we’re established in the class right now by going back and forth,” said Webb. “I think it has risen both of our levels and made us both better for sure.”

This is all a question of big picture and small picture. With a few moves in one race, Webb got the best of Musquin and extended his points lead. In the larger picture of future races and future race wins, his surrounding cast is going to tell him not to do this again.