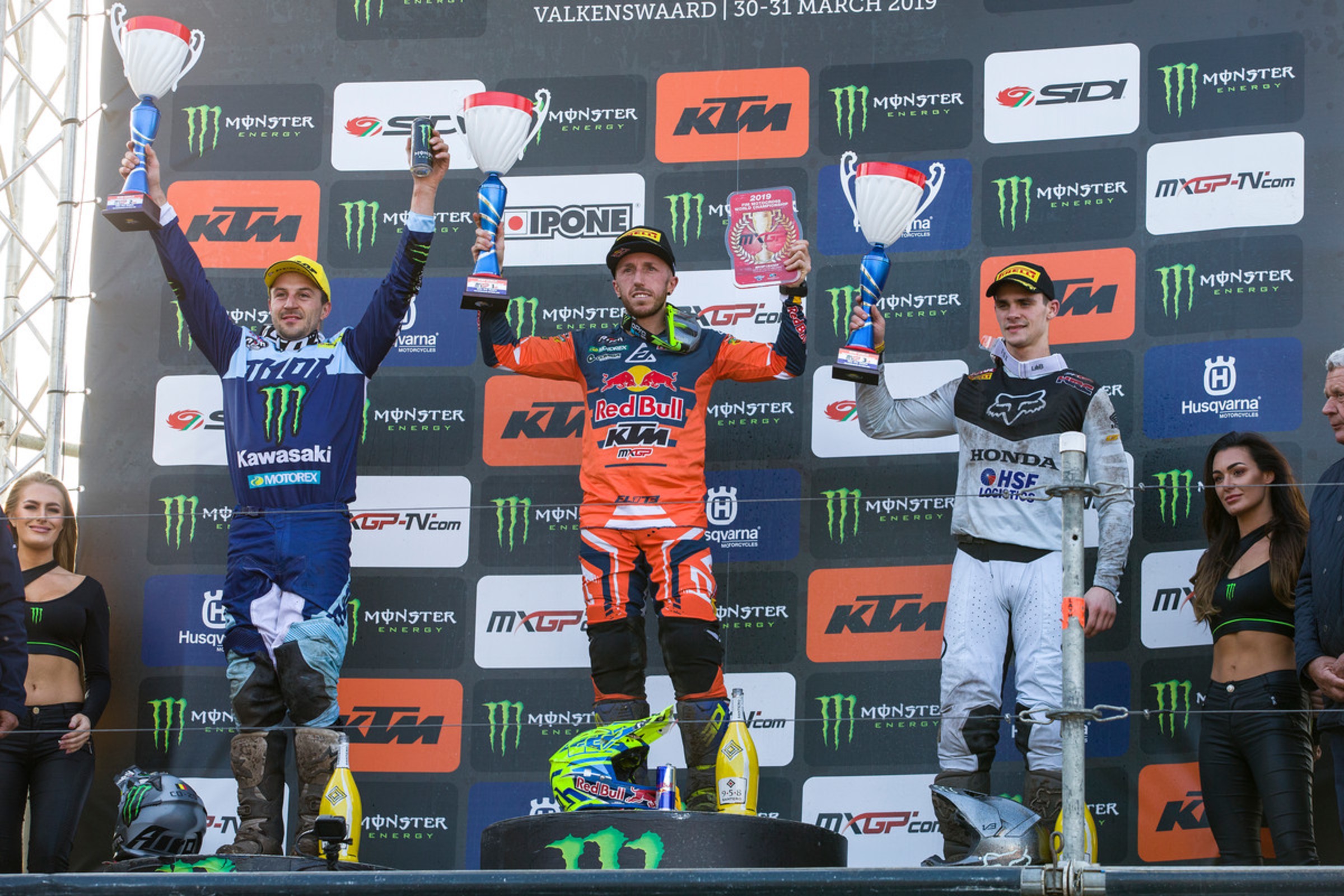 The first play in the sand for MXGP this year and a brutal Valkenswaard surface saw Red Bull KTM maintain their lofty status in 2019 after three of 19 rounds.

There was a collective sigh of relief that the sunshine shone in the Netherlands, making the arctic conditions the MXGP paddock found in Valkenswaard in 2018 seem even more like a bad dream. The decent and dry climate did not help the shallow Dutch sand, however, as the mostly flat Eurocircuit retained a firm, unrelenting base that was complicated by the series of ripples and sharp bumps that meant the terrain was treacherous and punishing.

On a day where Red Bull KTM again stretched their potent combination of talent, machinery, and preparation across two continents, here are some of the notable moments and issues from the Grand Prix and the second of three races on the bounce.

That’s three out of three in overall wins for Antonio Cairoli and five moto wins from six. The Italian’s form was hardly surprising. He had previously claimed six victories at Valkenswaard and is one of the best sand riders in the category. The 33-year-old managed his latest rout however with a mysterious right shoulder complaint that he first talked about after his British Grand Prix conquest the previous weekend.

“It is not an injury, more like a feeling,” he offered. “I cannot lift the shoulder so well, it is something with the nerve and I ride the bike stiff; I get arm-pump immediately. In the sand it is a little bit worse.”

Cairoli has won nine world championships by riding as slowly and consistently as possible, which is, of course, faster than almost anybody else. He was forced to drastically reduce that level of comfort in 2018 as Jeffrey Herlings set a fresh level of intensity in the dispute for race wins but Cairoli hasn’t had that urgency so far this year.

He was as brilliant as he needed to be in Holland by winning the qualification heat and both motos while setting the quickest lap in the second race when “the track was sketchy; when you land from the jumps you really have to hold on a lot.” The scorecard means he already has a 22-point lead in the championship standings: the worst thing his MXGP rivals can do is give TC a points margin to manage through the second half of the campaign.

Completing the KTM shoulder set was a returning Jorge Prado. The Spaniard waved goodbye to the red plate by missing the British round with a painful haematoma on his left limb but travelled to Valkenswaard to ride for the first time in almost two weeks and assess the state of his strength. The 18-year-old was pleasantly surprised to see that his technique and conditioning was enough to be equally dominant as his teammate. Four motos and four wins for the defending champion this year (who scored a Grand Prix podium finish on his debut across a vaguely similar course at Assen in 2016) but still a 36-point deficit to make up to Rockstar Energy Husqvarna’s Thomas Kjer Olsen who has finished 2-1-2 so far.

“I had a pretty good flow but it wasn't quite enough,” the Dane admitted. Olsen is a class-apart in Prado’s absence and the narrative of the MX2 competition in 2019 could use the added impetus of TKO being able to match his foe more regularly as surprising news emerged prior to the Grand Prix that Husqvarna will no longer be giving works support to Jacky Martens in the MX2 division. Olsen, and his tall frame, will be an ideal fit for MXGP and an FC 450, so expect the #19 to be tied up even more to the brand very soon.

A third podium finish in a row for Team HRC’s Tim Gajser keeps the 2016 world champion as Cairoli’s nearest threat in the standings but the trophies have been hard-won for the Slovenian who matched his spectacular first moto crash at Matterley Basin with another get-off at Valkenswaard where he was fortunate to continue.

“Luckily for him he is not injured and it is good he can keep on going,” observed Cairoli. “For the championship it is good to have someone like him close, also for speed. He is very fast at the moment.”

Gajser talked of cutting out the mistakes and will already have painful memories when similar tumbles ruined his title defense in 2017. Aside from sitting on the roulette wheel of injury, the Honda man is also gifting points to Cairoli (even with 16 Grands Prix still to run). His competitiveness was clearly evident toward the end of the second moto when he gave Cairoli a good push and was less than two seconds away from the KTM at the checkered flag. At the moment there is nobody else capable of stopping the KTM show and, promisingly, MXGP next heads to the hard-pack of Arco di Trento where Gajser traditionally enjoys a band of supporters as noisy as the partisan crowd and where he has sampled victory twice before.

There was some consternation in the paddock on Saturday with how unsandy Valkenswaard seemed to be. At this time of year in Europe organisers are understandably wary of ripping or over-prepping a track for fear of a spring deluge from the skies and the resistant Dutch surface was hard, fast, and frustratingly restrictive on Saturday despite the presence of the first round of WMX and the European EMX125 divisions. There were pockets of fierce action through the fields and the possibility to really hit new lines and find fresh time improved marginally for Sunday.

Riders were throttling hard through the sharp edges and kickers and occasionally they kicked-back. On such a stage it was remarkable to see Monster Energy Kawasaki’s Clement Desalle walk the second step of the box for his first podium appearance in 2019. That the Belgian (who is weirdly tagged as being ineffective in the sand despite success at Ottobiano in Italy and having won his first GP for Kawasaki at Assen in 2016) trod the rostrum at all with a painful left hand after his crash at Matterley Basin and then a tweaked knee after the first moto (“we needed to work with my doctor between the races,” he admitted) deserved big credit.

The bumps were not a deterrent for Rockstar Energy IceOne Husqvarna’s Arminas Jasikonis. The young Lithuanian has been as injured as much as he has impressed with raw speed in the past two seasons but his top five result thanks to a 4-4 indicated that there is more to come from the tallest rider in the class. AJ, almost the image of a young Ken De Dycker in the way he tackles motos, just needs to marry his strength and aggression with smarter race craft to become a more constant player near the front of the leaderboard.

Monster Energy Wilvo Yamaha’s Gautier Paulin has won two of the last four years at Valkenswaard and with two different brands. The Frenchman seems to be lacking optimum feeling on the YZ450F and his comments in the past two weeks point toward an ongoing search for the best set-up. A second moto crash here put him down to 13th for eighth overall and GP continued to talk of the work ahead. His speed in Matterley Basin was a clue that he’s making good gains but was off-the-boil in the sand for a trophy. Standing Construct KTM’s Max Anstie logged perhaps the biggest missed opportunity. The Brit led the first moto before a stall, crash, and pants-in-the-footpeg tangle cost valuable time and then almost crashed on the fast start-straight charge in the second race. Like Paulin, Anstie is another rider rushing hard to make his presence felt at the sharp end.

MXGP welcomed Desalle into the winner’s circle and in MX2 Monster Energy Kemea’s Jago Geerts also gave the Belgian fans in the crowd reason to cheer with an excellent second moto to take his first garland of 2019. He narrowly beat Olsen on the track, with a menacing Calvin Vlaanderen also in the shadows. Red Bull KTM’s Tom Vialle was always going to have a tough baptism to Grand Prix on the sand but apart from his second moto fall was otherwise encouraged with a top ten result. Credit also to the EMX250 opening round winner, Italian Alberto Forato, who rattled some of the top MX2 guys as well.

One of the most appealing traits of MXGP is the diversity of the locations, tracks, and cultures. The championship next heads into stony hard-pack of the compact and wonderfully scenic Pietramurata venue in Arco di Trento in northern Italy—a contrast to the versatile set-up and sand of the Eurocircuit facility in Valkenswaard. The tight and narrow nature of the layout will place a premium on race starts; an element of training and preparation that is bound to get a good workover in the few days and hours before the paddock squeezes into the Trentino topography this coming weekend.