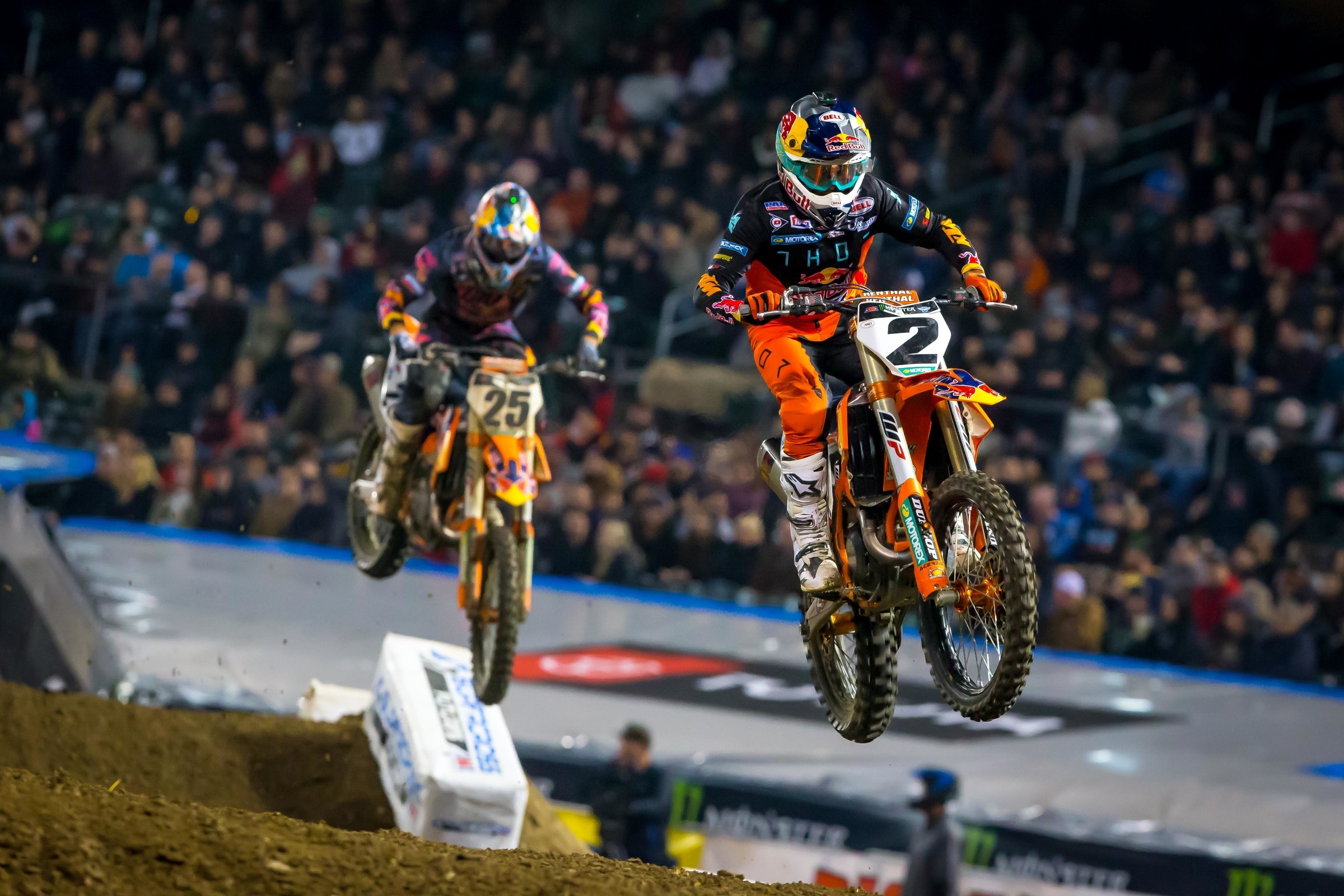 Speed or consistency—it’s provided bench racing ammunition for years. So let’s take a look at the Red Bull KTM team: Marvin Musquin versus Cooper Webb, the rivals who became teammates a few months ago, and now find themselves solidly 1-2 in the Monster Energy AMA Supercross standings. Both riders have been in the championship hunt all year—Webb retook the red plates following round seven in Arlington and Musquin has consistently been in the top four since round four at Oakland. Now Marvin has finally gotten his first race win and sits just 14 points behind Webb in the standings.

Webb’s five wins versus Musquin’s single victory makes it seem like a lopsided season in favor of Webb. In the races, though, it’s actually quite close. We’ve seen it for a few rounds now: Webb is ahead of his teammate,  but Musquin looks to be going faster and lays down a faster lap time—but he still finds himself behind his new teammate when the checkers wave. When we look at the film, we see Musquin’s ability to save time in this section or that section—wheeling through rollers or getting through the broken-down whoops quicker—but it seems like even when he does that, he still isn’t able to get around Webb.

So, we pulled some stats. In the 15 main events we’ve seen in 450SX so far in 2019 (three total races at Anaheim 2 and Detroit because of the Triple Crown), Musquin has had a faster lap in 12 of those main events. Yup, 12 out of 15 times. That means Musquin had a better top lap time on nights when Webb has won. Webb won in Minneapolis, but Musquin had a faster lap; same thing happened in Arlington.

Will this be the end-all and be-all statistic that guarantees who finishes higher? Not exactly, but it’s a rather good indicator. “Slow and steady wins the race” may be an old saying, but it’s brought up so often because it’s so true, as we see here. While the two riders train together at the Baker’s Factory, Webb’s technique of “I won’t be the fastest guy but I’ll put myself in a position to win” has seemed to trump Musquin’s raw speed. During qualifying, Webb has been near the top of the board, but some days his heater lap isn’t getting him anywhere. Detroit was one of those nights, as his heater lap in qualifying only landed him in ninth heading into the night show, but he willed his way to a second-place finish—on an off night. He finished in front of Musquin there, too.

Webb might not be outright faster than his teammate, but he’s done other things right—he’s started in front of Musquin more often than the other way around, he’s made fewer mistakes, and he’s rallied when it counts—like those crazy final laps at Arlington. The race in Oakland seemed to be a turning point for Musquin. Until then, he had finishes of 8-5-2 to start off the season. He started the race in second (behind Webb) but then stalled his bike.  Then we really saw some of that raw speed. Webb had a 1.901 second lead on him with 11 minutes left in the main event, then Musquin stalled and dropped to 8.032 seconds back. He was then passed by several riders and with a little under 10 minutes left sat in fifth, 10.852 seconds behind Webb. He could’ve ridden steady and settled for fifth. Instead, he charged back—with two minutes left he was in second, 3.536 seconds back. When the white flag came out, he was only 1.157 second back. Although he ran out of time to set up a pass on Webb, when the race finished Musquin was only 0.760 seconds behind his teammate. We saw Musquin pass Webb in the third race at the A2 Triple Crown (although Webb didn’t have to beat Musquin that race to get the overall) as Musquin was quicker through the rhythm section. But we can’t say for sure that Webb was desperately trying to prevent Musquin from getting around him (with the overall in hand already), so we won’t count it.

In Daytona, Musquin had a faster line in the section following the long rhythm section. He was wheeling the rollers into the triple, allowing him to create speed other riders didn’t have in that area. He also wheelied the landing into the finish line jump, which gave him a lot of speed into the jump—and just looked badass. But after being the fastest qualifier, mistakes in the main event dropped him to a third-place finish. Webb finished right in front of him.

It makes sense to say the fastest guy usually wins but comparing the Red Bull KTM teammate’s approaches might be the key to this season—even if Musquin is faster, Webb could win the championship because his execution lap-to-lap can trump his teammate’s raw speed. So far, Webb’s technique has worked out in his favor.