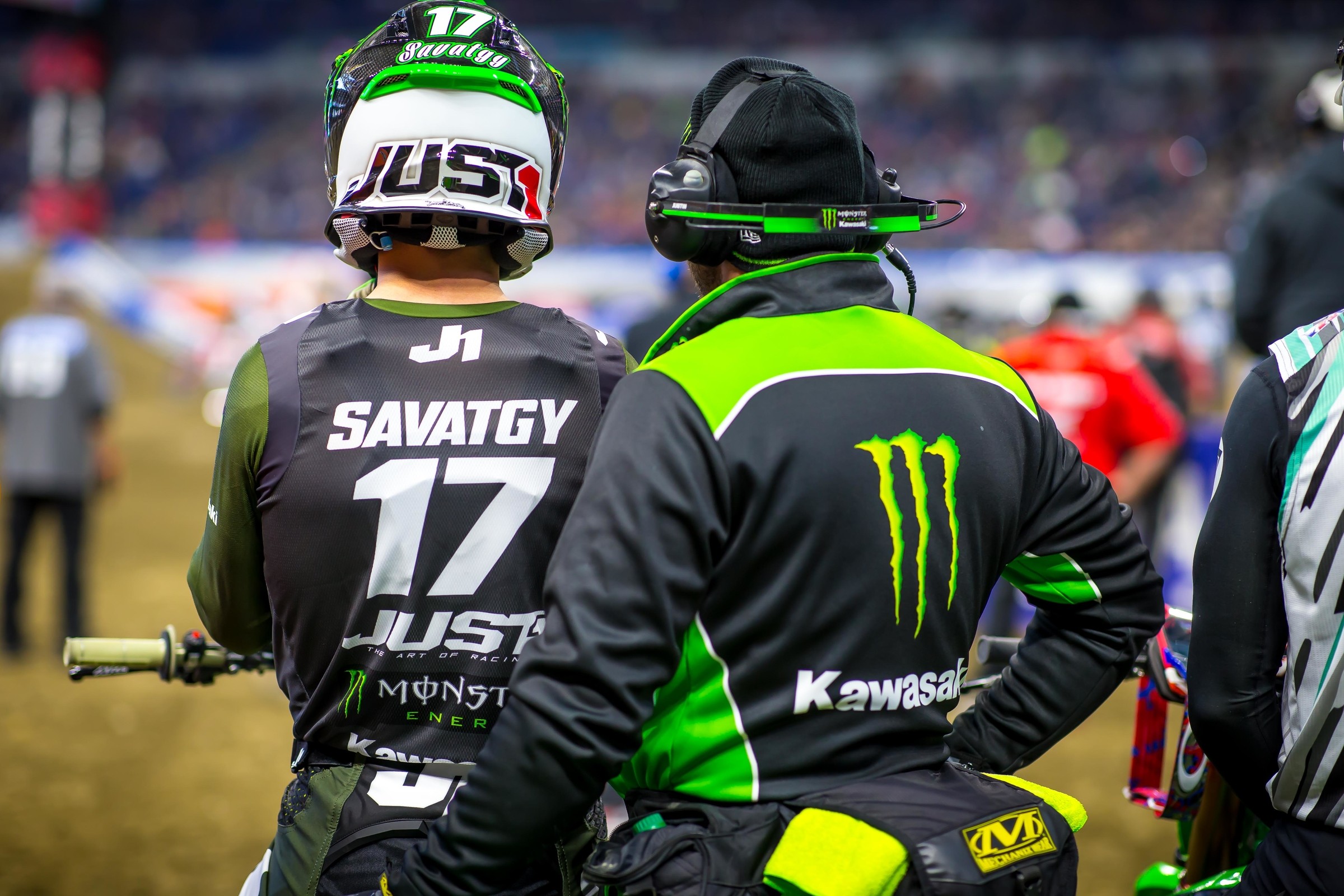 Marvin Musquin chose a gate pick a bit further outside than most would. It worked, though, as both he and Blake Baggett started at the front from out there. Why and how did it work?

With this start setup, riders swept into the first corner with a lot of momentum. If you got a good jump from the grid and felt you could beat the wave of riders from the inside, the outside allowed for the most speed to be carried in and through. The scary part of that choice is if things don’t go to plan, it will be very easy to end up off the track or buried in the back of the pack.

For Musquin and Baggett, this came down to one word: confidence. Their starts have been so solid and consistent, they didn’t fear the “what if.” They knew with almost certainty that they would beat the pack to the apex and could control the corner even from the outside. It was a total power move and cemented any doubt about which OEM has the grid start perfected.

The last factor was the exit ruts just past the gate. Most of the choices had nasty ruts, making it difficult to accelerate smoothly in those critical first few feet past the gate. That’s where riders get the room to clear their handlebars from the pack and put power to the ground. Ricky Carmichael coined the phrase “condition over position” when it comes to starting gates for this very reason. Choosing a gate 5-10 feet in either direction is much less important than being able to accelerate without being impeded by a deep, bumpy rut.

I know you may have asked yourself this before but what happened to Eli Tomac?

Oh man, if I knew this with certainty, I would be on Kawasaki payroll. I really think it’s related to Tomac maintaining poise in the face of adversity. When Tomac is the fastest guy, things are great, and he usually wins. But, when he is not the fastest or is passed by a rival, he struggles to take a deep breath and regroup. It appears that his confidence gets shaken and he loses focus.

From my outside perspective, he just can’t keep his cool when things aren’t perfect. Ideally, he would follow the rider that just passed him and figure out where he was losing time. Sit on their rear wheel and study both strengths and weaknesses around the racetrack in hopes of mounting a challenge. That takes mental fortitude and an inner calm, though. He should know he is capable of going faster than anyone. I know that is the truth and most race fans would agree. Keeping that basic fact at the forefront of his mind should be the rock his confidence relies on. If someone passes him, find out where and why that happened. Don’t let it ruin the race. It’s most likely one section or a bad line choice that can be addressed mid-race if a calm approach is taken. Not every race will go exactly how Tomac would like. He isn’t always going to be clearly faster than his rivals. Some nights, other guys will be clicking. Those are the most important nights of all. Responding constructively, figuring out a solution, and maintaining poise are all important racecraft qualities that I see room for improvement. He is arguably the fastest, most talented racer in America. The only problem is I think that sometimes, he seems to forget it.

The whoops have been a huge factor this season, maybe more than normal. Why?

I think it comes back to the lime situation. The lime is usually applied generously to these Midwest tracks, soaking up that spring mix moisture. For all of its controversy leaving San Diego, there is no denying that lime does a great job of managing the track deterioration. With little (maybe none?) lime being used, the tracks are rutty and treacherous at times. The whoops are a big part of that, changing rider strategy from blitzing to jumping at different times of the day and night. When and if that strategy changes is a fluid situation, though. Some riders prefer to blitz at all costs, like Tomac, Baggett, Ken Roczen, and Chad Reed. Others, like Cooper Webb, Zach Osborne, and Musquin, prefer to jump as soon as it becomes viable. It’s personal preference in the end but riders also have to be mindful that their choice is costing them valuable time. If Musquin, for example, opts for jumping too early, he could lose lots of time each lap. Blitzing, when done correctly, is faster most of the time. Musquin has to wait it out, staying patient for the track to deteriorate and his preferred method to shine. Often times, Musquin will suffer early in races, struggling to match pace with some of the more gifted blitzers. On tracks like Oakland, Detroit, Atlanta, or Indy, though, his jumping prowess shines through eventually. The lime, or lack thereof, is impacting that whole dynamic for several riders.

Joey Savatgy has been great this season when many didn’t know what to expect. Thoughts?

He has! I am very impressed with every aspect of Joey’s 2019 game. He hasn’t quite been able to finish on a few opportunities but his qualifying, heat races, and main event pace has been elite level. Joey was in a vulnerable position this season with a one-year contract but he has absolutely proven he deserves to be on factory equipment. Whether or not that is alongside Eli Tomac in 2020, that’s yet to be decided, but he will be signed somewhere and deservedly so. Good for him to step up and seize the opportunity when many, including myself, were doubting how this would go.

Austin Forkner has dominated the 250SX East Region. What else has caught your eye?

Yes, that’s true, but there have been other solid performers, too. Chase Sexton is not quite able to match Forkner’s edge in these main events, but he is rock solid. He will be a championship contender indoors and outdoors for the next few years.

Justin Cooper has surprised me as well. I don’t know why but I didn’t expect a lot from the New York native. He showed crazy speed outdoors last year so that’s probably my own oversight, but he has backed that up this spring. He’s shown resiliency, raw speed, and consistency. I have a feeling he has something up his sleeve once we step outside.