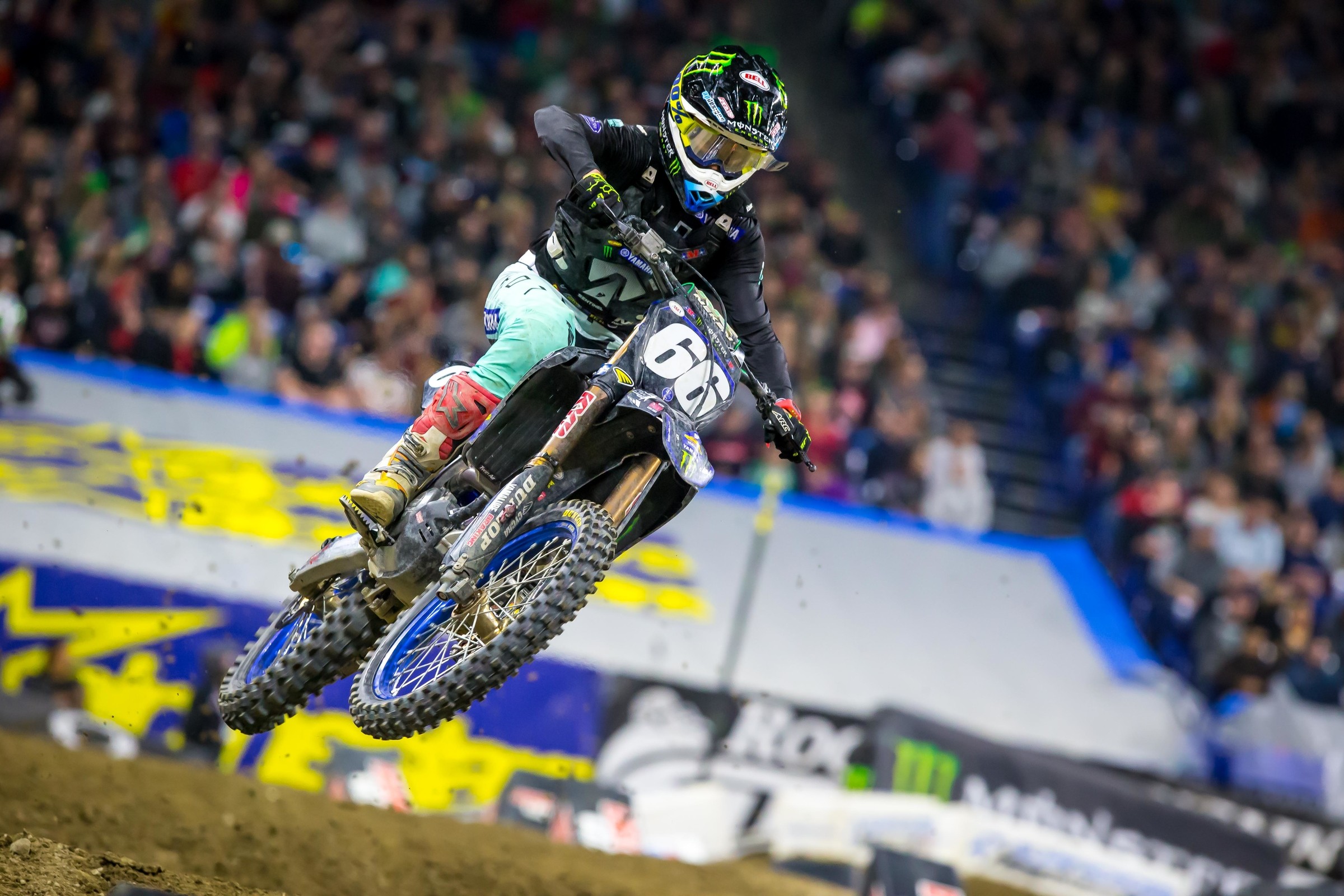 Redux News and Notes From Indianapolis

Straight eighth-place finishes for Honda HRC's Ken Roczen after he finished inside the top five at the opening nine rounds.

Of 115 laps led by Forkner in 250SX East Region-only rounds. Kyle Peters (2) and Jordon Smith (1) are the only other riders to have led a lap.

Of 135 laps led by Forkner including the East-West Showdown where he led 11 of 20 laps.

Place finish for Monster Energy Factory Yamaha's Justin Barcia on Saturday in his return after missing the last two rounds. It’s his first top five since winning the opening round at Anaheim.

250SX East Region riders that have finished inside the top-five in all six rounds: Austin Forkner, Chase Sexton, and Justin Cooper.

250SX riders who made their first main event of 2019 on Saturday: Fredrik Noren (13th), Lane Shaw (19th), Kevin Moranz (20th), Issac Teasdale (21st), and Bradley Taft (22nd) all made their first appearance of the year. It was Moranz and Teasdale's first career main events as well.

Times through 11 rounds that KTM has swept the 450SX podium with Webb,  Musquin, and Blake Baggett. Each time the finishing order been different: in Oakland, Webb took the overall and was followed by Musquin then Baggett; in Atlanta, Webb took the overall and Baggett edged out Musquin for second; and in Indianapolis, Musquin took his first win of the season over Baggett then Webb.

“After having a tough couple of weeks, months really, since winning Anaheim, it’s been difficult. Then my injury was pretty huge to me, actually, so for me I thought it was going to be difficult to come back from it. The basic thing for me was just to get comfortable and get back in the zone and I progressed all day. I don’t like saying I surprised myself, but I kind of surprised myself tonight. I stayed pretty calm all day, patient. I didn’t really let being off the pace a little bit in practice frustrate me, I just stayed focused, used my positive thinking and good mentality and it was a good race. It was a solid race for the first race back. We definitely want to keep progressing from here and get back on the podium. We’ll take a fifth and move on to next weekend.”

“There isn’t much to say about Indianapolis. It just wasn’t a good weekend for us. I had some struggles during the week and over the past couple of weeks that have really held me back and have made it so I can’t ride and train to my full potential. I’m trying to figure out what’s going on and hopefully get some answers soon. I’ve just been getting tired and I’m not sure why. Right now I’m just trying to focus on getting my body and everything aligned so that I can fight back and ride like I was during the beginning of the season. I’m obviously not where I want to be at eighth, but if there’s a good thing to take away it’s that we’re physically healthy and heading to Seattle.”

“Tonight was kind of tough to watch. I’m not sure what happened, but there wasn’t a lot of progression throughout the race obviously, as Kenny started and finished in basically the same position. Bike-wise, he was pretty happy and we didn’t make many changes throughout the day, so that wasn’t the issue. He wasn’t happy so we just need to figure it out and go from there.”

“This season has been a challenge and tonight was no difference. I’m really frustrated. I have the speed to do it but just need to put it all together. It’s definitely tough when you don’t put yourself in a good position off the start, which is what happened in the main. All I can do is keeping working and building forward.”

“Cole has been struggling to find his confidence this year. He has the skill and talent but I think he really just needs to believe in himself.”

“It was a crazy week for me. My wife went into labor Thursday morning at 1:00 a.m. a month early, so it has been a pretty stressful and a scary last couple days, but baby and mama are healthy and doing good. It was pretty hard to leave them to come to race this week. It was hard to get my head straight and to get back in race mode and ride my dirt bike.

“We had a decent day overall. The main event was good until the last four laps. I had no idea Justin was coming and kind of just checked out mentally and let it go. We live and we learn. I’m not going to let that happen again. We’ll keep working on our progress in the next couple weeks and come into Nashville swinging.”

“The track broke apart a lot in the main event and you had to try new lines throughout the race. I felt good at the start and just wasn’t able to keep the speed when it started to break down. I am happy to get back to where I feel like I at least should be at, but I’m still gunning for my first podium when we get back from our break.”

“It was a good day. We are still progressing, and the speed is coming up. I’m able to run the lead pace for longer and getting more comfortable at that pace. I still have a few areas to work on with Buddy Antunez, mainly in the 90-degree turns. I always want to improve, and I felt that I could have finished fifth this weekend. Unfortunately, I was dealing with some stomach cramps at the end of the race. However, the team made it happen for me and I earned my best result of the season. That’s something to build on.”

“I was super happy to qualify second in practice. It was the most comfortable I felt before on a super rutted track. It set me up for the first gate pick in my heat, which was nice. We made some changes with the clutch this past week, and I made really good progress with my starts. We finally figured some things out. I had a great start in the main, but got sandwiched and fell in the first turn. I picked up my bike and was dead last. It took two laps to even catch anyone. I was motoring and got up to ninth at the checkers. It was damage control and bittersweet, because I had the speed and capabilities to be on the podium. I’m bummed, but I’m also looking forward to this break to start testing for outdoors.”

With Malcolm Stewart (femur) and Vince Friese (knee) both expected to miss the rest of Monster Energy AMA Supercross, the Smartop/Bullfrog Spas/MotoConcepts Honda team called on a familiar face to fill-in at select rounds: Mike Alessi.

Although he hadn’t raced supercross since March 2017, Alessi jumped back into the fray in Atlanta, and has made all three main events he’s competed in thus far, with a best of 16th coming in Atlanta.

“[Mike] Genova [team owner] supported so much throughout my career. The least I could do is help him out and do these four races,” Alessi told Steve Matthes after Indianapolis.

Alessi’s last race will be this weekend in Seattle, as he will return to prepare for the Rockstar Triple Crown Championship in Canada, where Mike will race the motocross-portion for the Honda GDR/Fox Racing team. The series begins June 1 in Calgary.

The Smartop/Bullfrog Spas/MotoConcepts Honda team has been hit hard by the injury bug this year. With Alessi leaving after Seattle, the lone team member (unless they hire another fill-in) will be Justin Brayton. The veteran is dealing with a foot injury, though, and told Steve Matthes following Indianapolis it’s the “worst it’s been” and that he was going to get an X-ray.

“I felt good coming in, I hadn’t practiced during the week for two weeks, but on Sunday or Monday it came around pretty quick. I felt like riding on Wednesday but decided not to. I felt good until I hyperextended it backwards in the whoops. I definitely wasn’t going to pull it in, I just managed it. I just really hope it’s not fractured. It’s tough because I can’t ride on the ball of my foot, I’m riding on my heel. Tony [Alessi, team manager] was just trying to figure out how to get me a different footpeg to manage it—but I’m definitely going to keep racing.”

In the first 450SX timed qualifying session on Saturday at round 11 of Monster Energy AMA Supercross in Indianapolis, privateer Cole Martinez went down hard and caused the session to be red flagged while he was being attended to by the Alpinestars Mobile Medical Unit. He did not return for the following session.

Early yesterday, Martinez provided an update on Instagram, saying he sustained a broken femur. He underwent surgery on Sunday and wrote that he’s better than he expected to be.

Through 11 rounds of the championship, Martinez has made five main events with a season-high 13th coming in Oakland. He’s currently 22nd in 450SX points.

For those of you who may not be aware of the bet Steve Matthes and Pro Circuit boss Mitch Payton made prior to the start of the East Region, we’ll quickly recap. Steve bet Payton that Alex Martin would finish ahead of Martin Davalos in 250SX East points at the end of the year. If Steve won, Mitch would have to drive to Vegas for a live PulpMX Show; if Mitch won, Steve would have to go and clean the Pro Circuit shop. (We may or may not have already discussed making a video of Steve cleaning the shop, shall he lose.)

Through six rounds, and as the East Region goes on a break, Martin holds a SLIM three-point lead on Davalos.

“If it gets down to Vegas, I don’t want to mop the floors, so we’re gonna leave them dirty,” Payton told Matthes after Vegas.

This should be good!

gif of the Weekend

On the podium after the race, Cooper Webb referred to landing on Tuff Blox and riding it out (and even passing Eli Tomac during this!) as a, "true RC moment."

Here's what he's talking about:

Here's the true RC moment Webb is referencing, from the Vancouver Supercross in December of 2004.

Gif of the Weekend, Part II