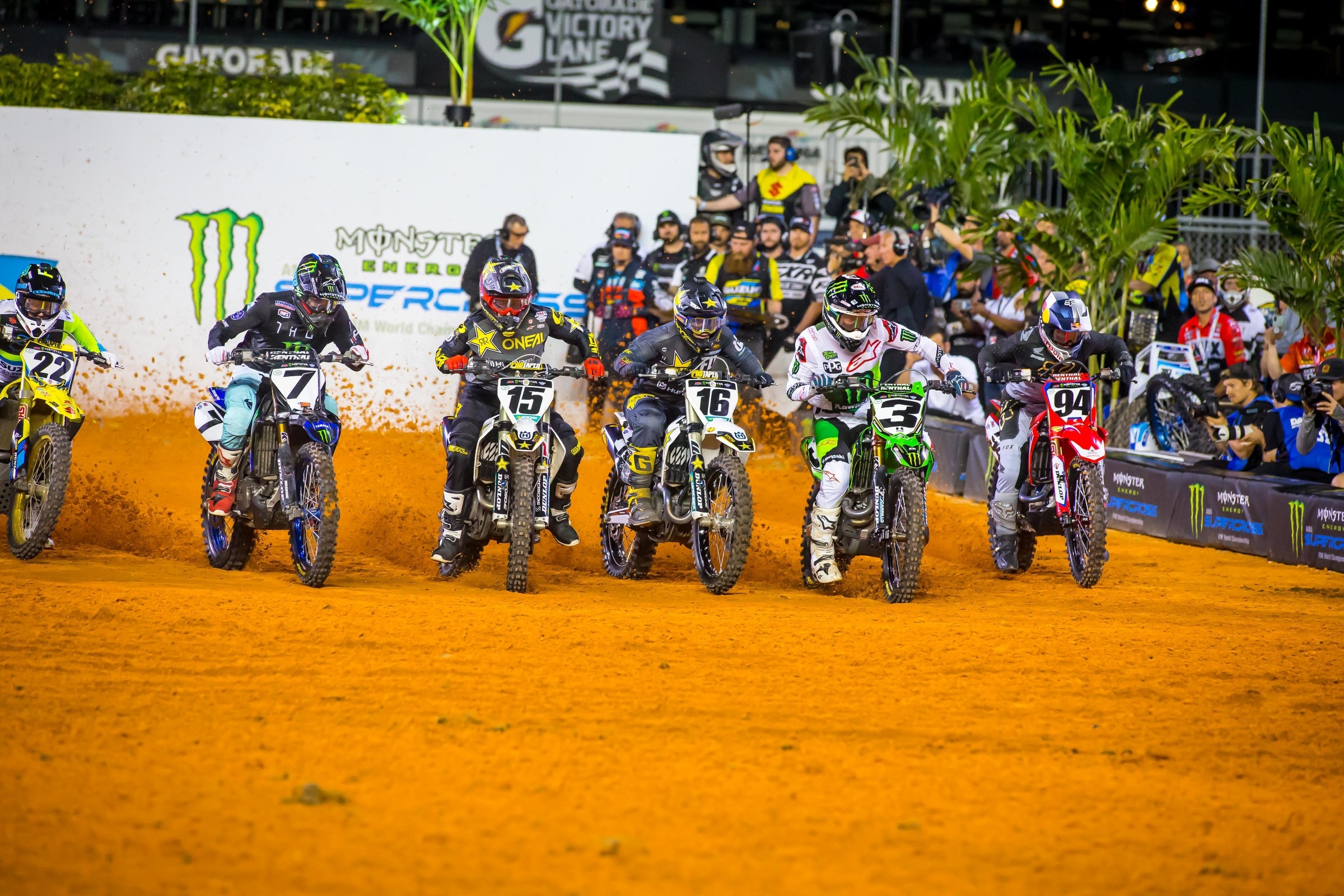 After a warm trip to sunny Florida, the supercross circus heads back into the cold Midwest weather of Indianapolis. Daytona saw a return to form for Eli Tomac and yet again another points extension by Cooper Webb. If the series does indeed start at Daytona, Eli Tomac and Marvin Musquin are now tied for second behind the #2 KTM. I doubt they have any interest in working together to reel in the red-hot Webb but they might need each other’s help to do so. One thing’s for sure, as these final rounds wind down, the clock is ticking if anyone plans on turning the tide.

As for the Indy track, this is a very traditional supercross track. It’s not overly busy, it has very straight forward rhythm sections, and I see the start being hyper critical.

The start is very similar to Daytona and Detroit, cutting across the width of the stadium and into a fast left-hand corner. The main difference between Indy and Daytona’s first corner is that the inside won’t be as dominant this weekend. The middle gates look to be the shortest distance and the most optimal entrance where Daytona favored the inside much more.

The first rhythm will be a 3-2 on standard laps but will end up being either 2-2 or 2-3 on the start. The next corner is a 90 to the left and the main line will be to protect the inside. Riders will double from the inside and most likely tabletop to single and then single out of the section to the inside. They will cut across the inside of the next 90 left and double yet again. That sets them up for a 3-3 and into the first bowl berm.

Firing out of the bowl berm, riders will enter the first of two Indy whoops sections. Indy whoops usually turn into jumpers by the main event so watch for that change to occur. Blake Baggett, Ken Roczen, and Tomac have been reluctant to jump at times while Webb and Musquin are usually the first to transition. It’s almost like pit stops in NASCAR. Once one makes the move, everyone else follows shortly thereafter.

The whoops end with a 90-degree right hand turn and immediately into a step-on step-off. Riders could also opt to step over the tabletop and single to the inside, maintaining control of the inside line. Another 90-degree turn is up next and then a short rhythm. I expect riders will double, step-on step-off before racing into a 180-degree sand corner. There have already been mentions made mid-week about this sand corner so look for potential changes before it’s time to go racing. Sand corners with a 100 percent chance of following the lead rider into a sandblast can’t be the best choice, right? We shall see, I guess.

After exiting the sand, riders race back toward the finish line and wrap around the position tower 180. Look for riders to hug the inside and fire into the next whoops section. A tight inside line before the whoops would have been difficult to execute back in the two-stroke days but modern four-strokes have plenty of torque to get back up to ideal entry speed. A whoops section like this is especially ideal for jumping as there isn’t excess speed to scrub off before entry. If the entry to whoops is very fast, blitzing will almost always be the ideal approach. This slow corner entering the whoops favors Webb and Musquin.

After the whoops, another fast straightaway sets riders up for a 90 degree left and three jumps. The most likely approach here will be to go 2-1 and cut across the inside of the next corner. Shortening up the next corner and setting up for the triple will be the biggest priority and dictate the line riders choose. They will swing out wide on the double, land on the far right and single across at an angle. That will allow them to carry speed through the corner and seat bounce the next triple. To go fast on supercross tracks, lines have to be planned and laid out geometrically. This is a great example.

Landing on the triple fires riders into the first corner and on their way to lap two.

Will Marvin or Eli find a way to dent the points gap?

Can Sexton find the hometown magic to stop Forkner?

Where oh where is Marty’s speed?

Eli Tomac ripped off a Daytona win and cut the deficit to 19, also tying Musquin for second in the series. He is going to need a heroic stretch to win this title.

Austin Forkner can do no wrong right now. Very impressive series for him and bodes well for his outdoor chances.

Chase Sexton may be losing the war to Forkner but he has firmly established himself as a contender moving forward.

Cooper Webb has a 19-point lead and is managing things quite nicely. This has to be the most “out of nowhere” runs since McGrath in ‘93 (ok, maybe Carmichael in 2001, also).

Joey Savatgy is quietly putting in the best rookie season of the four that moved up (Hill, Osborne, Savatgy, Plessinger).

Aaron Plessinger broke his heel at Daytona and will be out of action for a good while.

Cole Seely just can NOT find a way to get a good result on the board. He is riding so much better than his results indicate.

Troy Lee Designs/Red Bull KTM lost Jordon Smith to injury and Mitchell Falk has been out for a few weeks. Shane McElrath was their lone wolf in Daytona, putting his 250 SX-F into 12th place of the 450 class.

Ken Roczen has lost touch with the points lead after a few rough weeks. He’s actually riding well but bad starts and first turn mishaps are putting him in tough situations. He will bounce back.

Jason Weigandt’s voice is garbage after announcing the Daytona Supercross Saturday, amateur RCSX Sunday morning and Monday, Daytona Racer X Review Podcast on Sunday night, Vintage SX on Tuesday, and AMA Flat Track on Thursday. He will barely be able to talk to his daughter this weekend (the one that Matthes didn’t know existed).

Austin Forkner races a sidecar, winning the main event with his girlfriend as his co-pilot.

#sandcorner is trending on twitter at around 9 p.m. local time.

Justin Hill rides incredibly well, holding strong for 21 minutes. Or, he looks uninterested and rides around in 14th. I don’t know what to think anymore. Whatever.