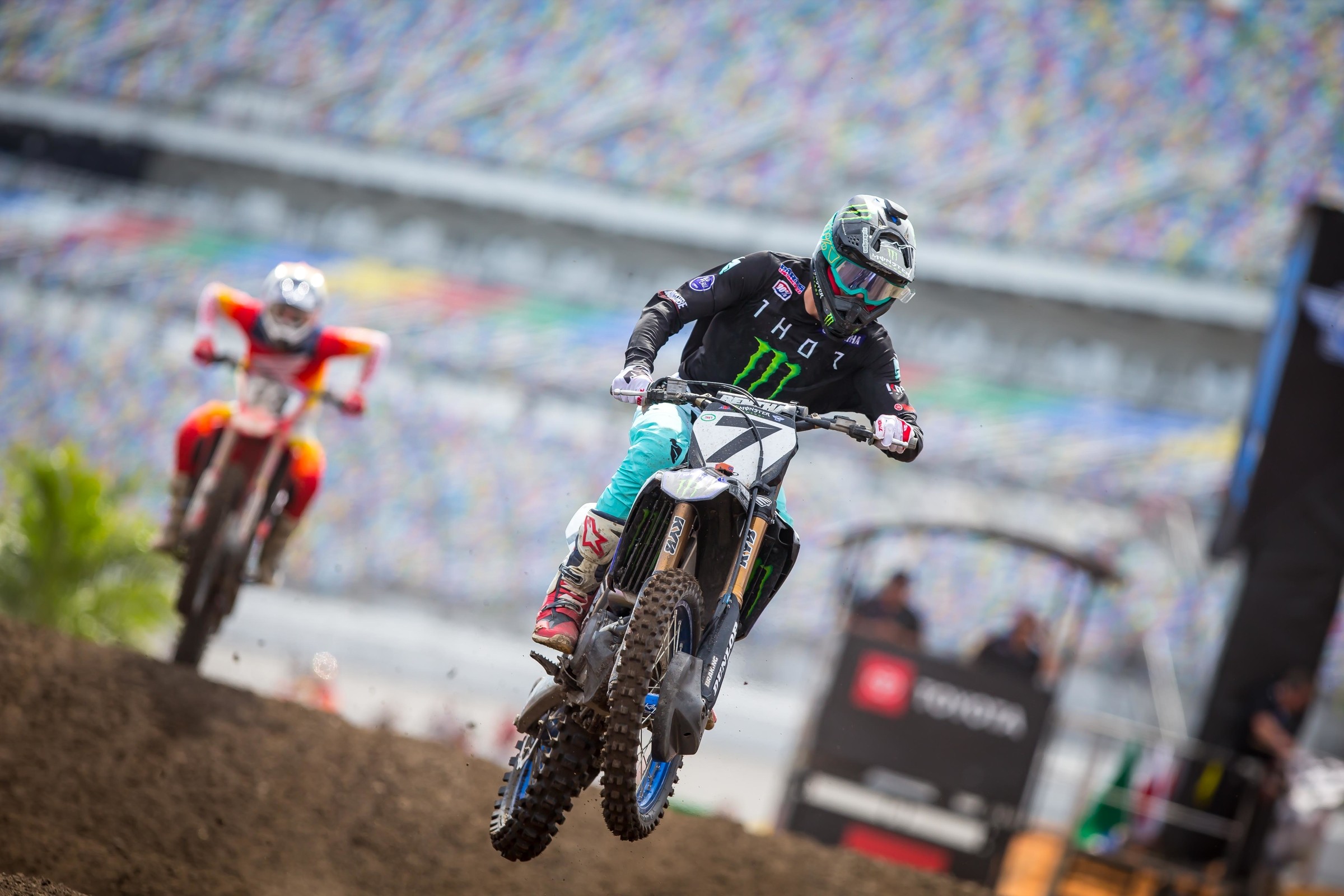 Comment: Anderson is out for the remainder of supercross after sustaining a broken arm and ribs, lacerated liver, partially collapsed lung, and back injuries while practicing early in the season.

Comment: Barcia hasn’t raced since before Atlanta due to a concussion, but he has been cleared and will return to racing this weekend.

Comment: Bloss is working toward being ready for Lucas Oil Pro Motocross after a torn ACL benched him for all of Monster Energy AMA Supercross.

Comment: Friese suffered a torn ACL in Arlington and is out for the season. Mike Alessi is filling in for him at select rounds.

Comment: Plessinger crashed in Daytona and broke his heel. He had surgery on Wednesday. At this point there is no set date for his return.

Comment: Raper broke his pelvis, a pair of vertebrae, and his nose in late November. He recently got clearance to ride and says he might race as early as Seattle. If that doesn’t work he will return at Houston. To help him go to Road 2 Recovery.

Comment: Tedder recently returned to riding but still isn’t able to train hard yet. He won’t be back in the immediate future.

CEDRIC SOUBEYRAS – BANGED UP | IN

Comment: Souberas had a big crash on the start of the LCQ in Daytona. He didn’t break anything but is pretty banged up. We learned on Thursday he plans on racing Indianapolis.

Comment: Stewart will miss the rest of the season after sustaining a broken femur in Glendale.

Comment: Ames sustained a compound fracture to his left radius and ulna before the season and had a bout with compartment syndrome and later, an infection in his arm.  He isn’t expected to race this season.

Comment: Cantrell broke a bone in his wrist at press day in Atlanta. No date has been set for his return.

Comment: Cartwright went down hard in the LCQ in Daytona. On Instagram he said if he checked out okay he’d be in for Indianapolis.

Comment: Craig hoped to be ready to race in Minneapolis after fracturing his thumb before the season but he was still dealing with significant pain when he tried to race. He later learned he’d dislocated his thumb again and had to have a second surgery. There is no timetable on his return.

Comment: Crown dislocated his ankle after Atlanta. Fortunately he didn’t tear anything and plans on being back riding next week and returning to racing in Nashville.

MITCHELL FALK – BANGED UP | IN

Comment: Falk crashed before Arlington but is scheduled to return to racing in Indianapolis.

Comment: Fleming broke his femur, clavicle, tibia, and fibula in Atlanta. He’s already undergone surgery on his femur. He’s having to pay out of network costs for his physical therapy until he’s healed enough to return home, so this won’t be an inexpensive ordeal. To help him go to Road 2 Recovery.

Comment: Lawrence is back on the bike after injuring his collarbone before the season, but isn’t expected to race any supercross races in 2019.

Comment: Owen went down in the whoops in Daytona and went into the wall. He sustained a fracture to one of his lower vertebrae in the process. He’ll miss Indianapolis but hopes to be back for Nashville.

Comment: Smith has been dealing with a bad wrist ever since crashing in Arlington. He’s been trying to ride through the pain, but the pain has gotten worse. He’s out for this weekend.

Comment: Weltin injured his shoulder at Daytona and will miss this weekend. He hopes to be back for Nashville.