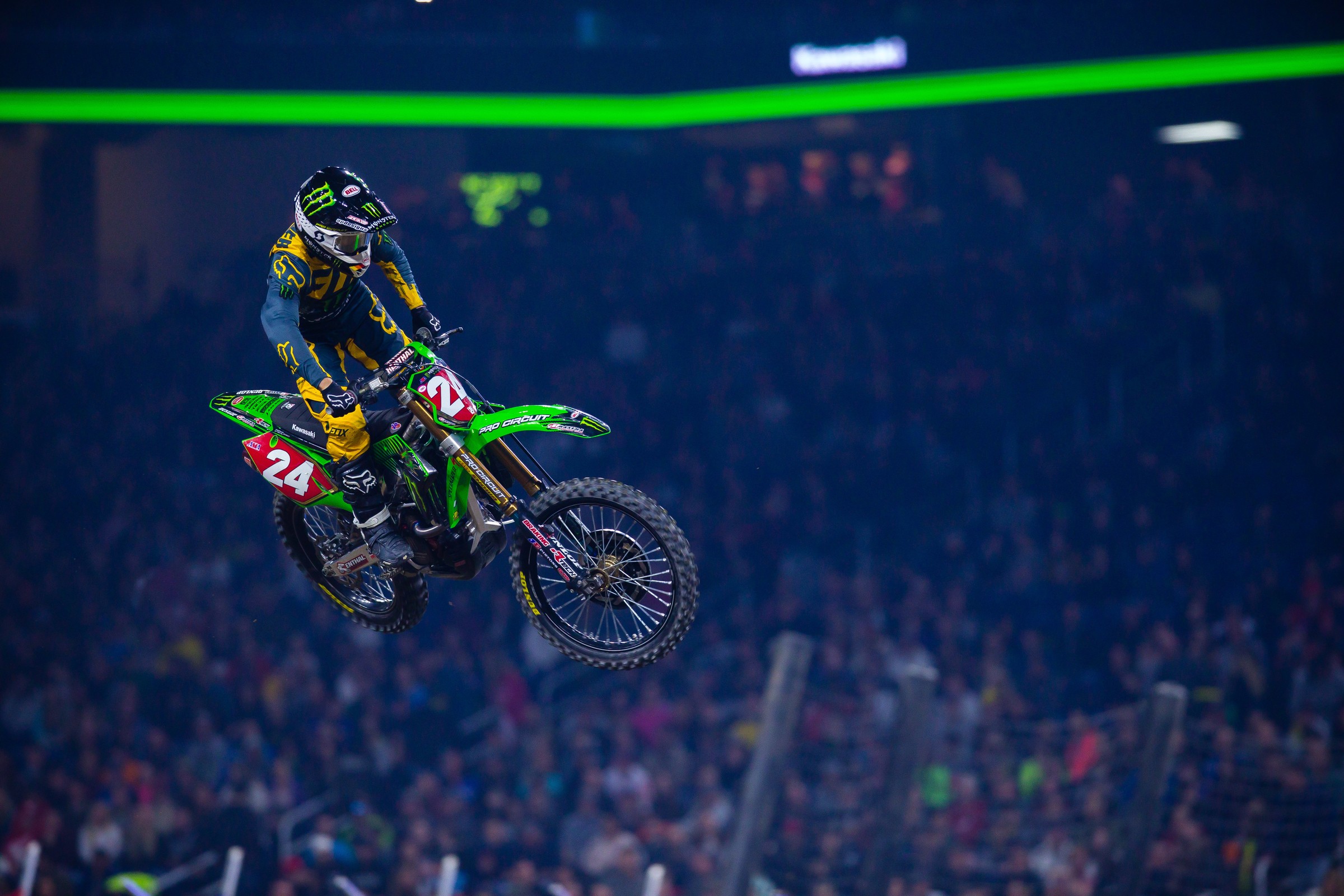 Now in the third year of a well-documented professional career which has saw him hold station with the Monster Energy/Pro Circuit/Kawasaki race team, one Austin Forkner has become—along with Cooper Webb—the breakout sensation of the young Monster Energy Supercross Championship.

Sent out to run in the fiercely competitive 250SX East Region by team owner and operator Mitch Payton, Forkner, of Richards, Missouri, has been virtually flawless in winning the first three 250SX East Region Supercross events at Minneapolis, Arlington, and Detroit, respectively. Certainly living up to and riding up to the hefty expectations that have followed him from an excellent amateur racing career, the 20-year-old is rapidly moving toward becoming one of the very elite 250cc riders in the world.

The night before the Atlanta Supercross set for opulent Mercedes-Benz Stadium, Forkner got us up to speed—Pixy Stix and all—on what has been a very promising stadium rock tour for him so far.

Racer X: Alright, Austin, what’s going on down in Atlanta, Georgia?
Austin Forkner: It’s solid. I rode press today and the track was pretty good. All good and the track, it’s exactly how it will be on Saturday. We just didn’t ride the whoops today. It’s pretty similar to most of the other tracks I’ve ridden on this year; it’s pretty soft and rutty.

I spoke with you before the season started and you weren’t completely sure if you wanted to race in the East Region or West Region. With three straight wins, the East Region is treating you pretty good thus far, huh?
Yeah, it’s solid. I feel like with the way that I’m riding, it really wouldn’t have mattered whether I would have went West or East. I would have been solid either way, but I have been glad to avoid some of the mud races that the West has had. That’s been good.

You’re three for three and have been totally dominant in the class. Talk about charging into a season the way you want to...
Yeah, exactly. I definitely didn’t think that I would be at this point right now. I was obviously hoping to win, but I didn’t think I'd be undefeated going into the fourth round of the series. I haven’t lost a heat race or anything. That’s a bit of a surprise, so I’m happy and I’m glad to see the work that I’ve put in during the off-season is now working.

Right before the East Region kicked off, I saw you and you struck me as being both determined and excited to go racing. You were ready right from the onset, weren’t you?
I just worked a lot during the off-season with Robbie Reynard and my off-the-bike fitness coach Angus. That’s pretty much it. We worked at it every single day. Then I had to go out to California. So we had to do quite a bit of testing on the bike. Not that much, but we just got the bike working really good. Mitch made a few changes to the motor and it’s solid. Everything with the bike is perfect. I was pretty happy I was out in California because we got the bike exactly how I wanted it set up. There are no complaints from me, really.

And to win three races consecutively is really quite good. There isn’t a day that goes by when I speak with an accomplished racer about how once they get that first taste of victory, it’s straight-up hard to stop. Thoughts?
Yeah, it gives me confidence. After you win once, and especially twice, it makes you confident that you can keep doing it and that’s kind of where I am right now. I think that if I get a good start, there is no reason why anybody else should beat me. And even if I don’t get a good start, I feel like I should be able to come through the pack a little bit. But if I get a holeshot, I definitely feel like there no reason why I shouldn’t win at this point.

As far as the competition you’re facing out there, you seem to have most everyone covered. Would you agree?
Yeah, I don’t want to be like that either because that’s when things start going wrong for you or you can’t figure something out. I don’t want to be like that, as long as I keep getting good starts, I mean, honestly, when it comes race time, I don’t think that there is anybody faster than me that I line up against. At least that has yet to happen. [Chase] Sexton was a faster qualifier than me last weekend, but when it came time to race, you saw what happened. I don’t want to be that guy. I don’t want to say they can’t be liking the track one night when I’m struggling with it. The first few races, though, with my starts which have definitely helped, it might have been different if I didn’t get holeshots and I had to pass somebody. It’s been going really good for me the first couple races.

Plus you can play off this momentum and keep rolling with it. I mean, the West Region guys get pretty interrupted and out of sorts with their schedule, huh?
Yeah, exactly. Traveling takes a lot out of you. Even after these first three races, I feel the effects travel has one you. That and just that weekly kind of grind that just kind of sucks during the season. The benefit for the West Region guys tomorrow is that they’re coming in fresh after having a few weeks off, but they haven’t been racing for a couple of weeks, so that’s a little bit different. Really, both the West Coast guys and East Coast guys both have advantages, so it’s going to come down to who just puts it together.

With Atlanta being an East/West Showdown, that would be a great one to win. You can really stamp your authority on all things 250cc motocross bikes.
I think I definitely can. I’m not super worried about the East/West stuff or who I’m lined up against. I need to focus on the East Coast Championship and the East Coast guys. If I can win tomorrow, great. If not, I just want to finish ahead of the East guys. I don’t want to do anything stupid messing around with the West Coast guys tomorrow.

As well as things are going, what do you feel you’ve improved the most upon thus far in 2019 supercross?
I feel super-solid and feel as fit as I’ve ever been. I feel super-solid as far as strength and cardio and everything. It’s just another year under my belt, you know? I think getting a taste of winning last year really helped. I’ve also been learning from the mistakes that I made last year. I’m still learning this year. You never stop. I’ve raced supercross for two years now, so more and more experience just helps me. I can’t really complain about anything at this point. I just want to keep doing what I’ve been doing. Let’s keep winning and maybe I can get it wrapped up before Vegas!

The Pixy Stix. What’s going on there, brother? Do you use them at every race or that a Team Forkner secret?
No, not at every race. It’s not a secret. It’s just science, really. If you know what a Pixy Stix is, that’s what my trainer tells me to take. I’ve yet to have any proof that it doesn’t work. As long as I’m doing solid, then I’ll keep taking them and it seems like they’ve been working so far this year. It works!