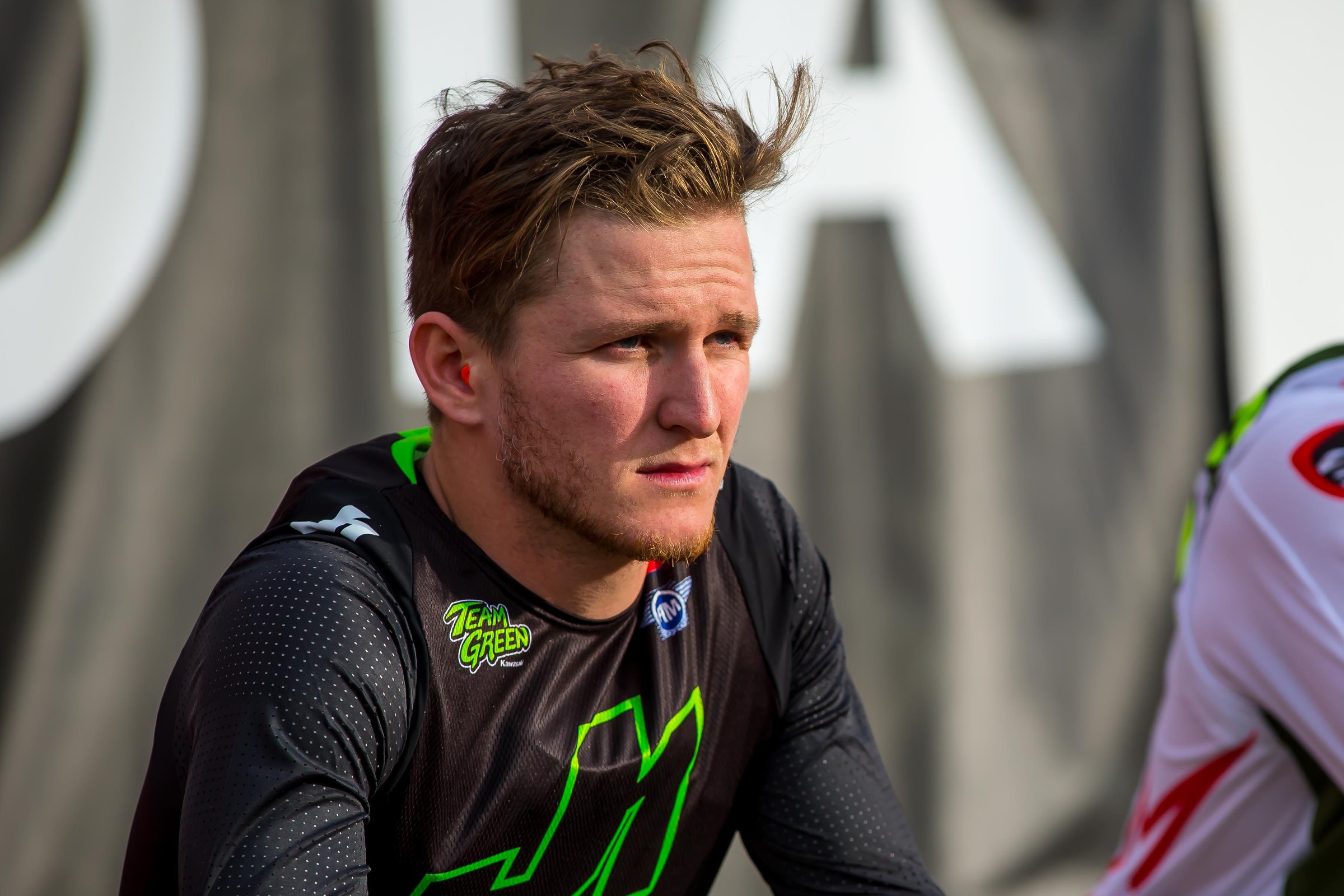 Monster Energy Kawasaki’s Joey Savatgy hasn’t had his ideal introduction into the 450 Class. The rookie went down in the first turn of Anaheim 1’s main event—his first main event in the premier class—and has had to battle through some other obstacles. Savatgy had a hard fall in Glendale that resulted in concussion protocol holding him out for the remainder of the night and he had a bike problem in Oakland when he was in second place about halfway through the main event, which forced him to retire from the race early and finish in 21st.

But he has also had his fair share of running near the top of the class. He has been fast in qualifying, has won a heat race, has lead laps in the main event, and in the last four rounds, has finishes of 7-4-5-8.

Taking a gasp of air after the recently-run Detroit Supercross, the veteran 250cc campaigner turned 450cc pilot, Savatgy spoke of his new 450 Class way of racing life. Faster with each given main event, he has proven that he can run the race and go the pace with the world's best supercross racers. Looking at Saturday's race in Atlanta as something of a hometown race, the Florida native is hoping to find a way up and onto the podium based inside Mercedes-Benz Stadium.

Our Eric Johnson caught up with him earlier this week.

Racer X: Alright my man, so what do you have going today, where are you today?
Joey Savatgy: I'm in Florida. I got my stuff done for the day and it just started raining a little bit, so I took a nap. That's about it, man.

You have to love taking a nap, huh?
Absolutely. It's a never-ending schedule with 450 supercross, for sure. A short nap can be nice.

Yeah, racing full-time in the 450 Class can be never-ending, as you are now learning, a bit of a marathon, eh?
Yeah, obviously it's a lot of weekends in a row before we get a weekend off. It'll be nice this weekend to race in Atlanta and it'll be a nice change of pace to not have to go to the airport and not sit on an airplane and do all that.

The upside is, though, that you're right there in the mix in the 450 classification. No mean feat at all!
Yeah, that obviously that makes the job a little bit easier and more and more enjoyable when things are going well. If we were struggling and we weren't excelling or making each other happy, it would make it all that much more miserable. Things have been going kind of how we wanted to and we've been able to have consistent progress and put ourselves in good spots. It's definitely more manageable when it's like this.

Tapping a gear downward, the first two rounds—Anaheim 1 and Phoenix—were not kind to you. Nonetheless, you kept focused and continued to improve.
The first round at Anaheim wasn't good, but it was a mud race and unfortunately and with those you either do good or you don't. We had some issues and some things we needed to figure out. We went to Phoenix and didn't qualify terribly, but then I went into a heat race and made a stupid mistake on my part. It was a miscalculation on timing and the crash wasn't bad at all. I must have caught the bars with my helmet and I kind of whiplashed into the ground. The impact was worse than what the crash was. Unfortunately, I wasn't able to race that night. I kind of thought about it the whole way home and just tried to figure out what I needed to do and the biggest thing for me was to get comfortable.

I really emphasized that during the week and I turned up the next weekend at Anaheim with a different mentality and I just reminded myself that no one expects anything other than for me to just get seat time and to improve for the future. Being comfortable on the bike, for me, is huge and we've been able to do that. Once we go past those first two rounds and we went back to the Triple Crown format and the results weren't terrible there. It was definitely a building block to place eighth overall and from there on out, it has definitely gone uphill and it has gotten better. I want to keep the ball rolling and enjoy all this stuff as I do it.

Yes, a 250SX racer making the jump up to the 450SX is by no means easy. All things considered thus far, though, you're hanging tough.
Like I said, the first round is a wash. People just say what they want. We all had the same conditions and I went down in the first corner. No excuses. If everything would have worked out that night, we definitely could have been in the top five or top seven, for sure. Unfortunately, that's not how it went. Mentally, though, I believe in my program and I knew what I had done in the off-season had been very productive and I felt good. I knew it was just a matter of finding a happy spot and finding a flow each weekend. I knew the results would come. We got to the third race, and like I said, the results were still not great, but the results were a big step in the right direction for me. We got all those gate drops that night and we go to battle with some guys and I walked away with eighth overall on the night. I knew that the speed was there and I knew the fitness was good, it was just a matter of putting it all together.

And then came round four at Oakland. Not a great night for you with a 21st main event finish. Thoughts?
Things really clicked there and we were fast. We won a heat race and we put ourselves in a good spot for the main event. It really clicked there. I thought, I'm just as good as these guys. They have the experience on me, but I do believe my ability on a motorcycle is just as good as anyone else out there. Confidence is definitely huge in this sport and just putting myself in a winning position early on and just proving to myself that I do belong up there has gone a long way.

To your point, you guys then went to San Diego and you were right there in the fray and seemingly gaining traction. I mean, you're now in the mix. A confidence-inspiring result for you?
Like I said, the traction kind of started to go and my confidence started to grow. I definitely believe that on any given weekend I'm capable of being up there near the podium spot. Other people might think I'm cocky, but I've done it before. Like I said, I believe in my training program and I believe in my ability on the motorcycle. If we get a good start and we're feeling good that night, there is no reason why we can't run up there with those guys. Obviously, there are a lot of really fast and proven guys and champions. I think the speed has been there every weekend. We've been pretty consistent. It's just a matter of kid of putting all the pieces of the puzzle together. I think once I do that, we'll be ready to rock and roll.

What's huge is that you now know you can do it in 450 Class. You've been out there with the major players and have posted up some encouraging results. Like I said, you're right there.
Yeah, I've learned from other people's interviews when they go pro, or in any realm, when people make bold statements, I tend to stay away from that. If it doesn't work out, you just get bashed for it. For me, I believe I don't feel like I'm speaking outside my realm when I believe that I can be up there for a podium spot every weekend. We just want to keep that mentality going forward.

Hey, what's the difference between lining up behind the starting gate now as opposed to racing with the 250 Class guys? Is it radically different as far as racecraft goes?
I would definitely say, for the most part, the biggest difference is the race etiquette. The respect is a lot higher and the race etiquette in the 450 class is way higher than in the Lites class.

Atlanta this weekend. Something of a hometown race, huh?
Yeah, it's Atlanta and I have a lot of family there. Atlanta is big for me and so is Daytona. But yeah, they're just other races with other tracks thrown into it. I'll just show up and try to perform, huh? I want to perform to my ability. I don't want to leave there thinking, I wish I would have done this or that... Results-wise, and I put this pressure on myself for positioning, it's important to get good results every weekend. Last weekend was a bummer because we ended up eighth in the Triple Crown, but we had a shot at the overall podium before I went down. The speed was there. The results might not have been there, but we rode well. I think going into Atlanta and Daytona, if we show up and if we're fast and show speed and we ride good, that's all I'm looking for every weekend. I want to learn and to get another gate drop under my belt. It's a long season and there is a lot to learn. There is something new to learn every weekend and I want to be better every weekend. What's going to make me happy is just riding well and learning.