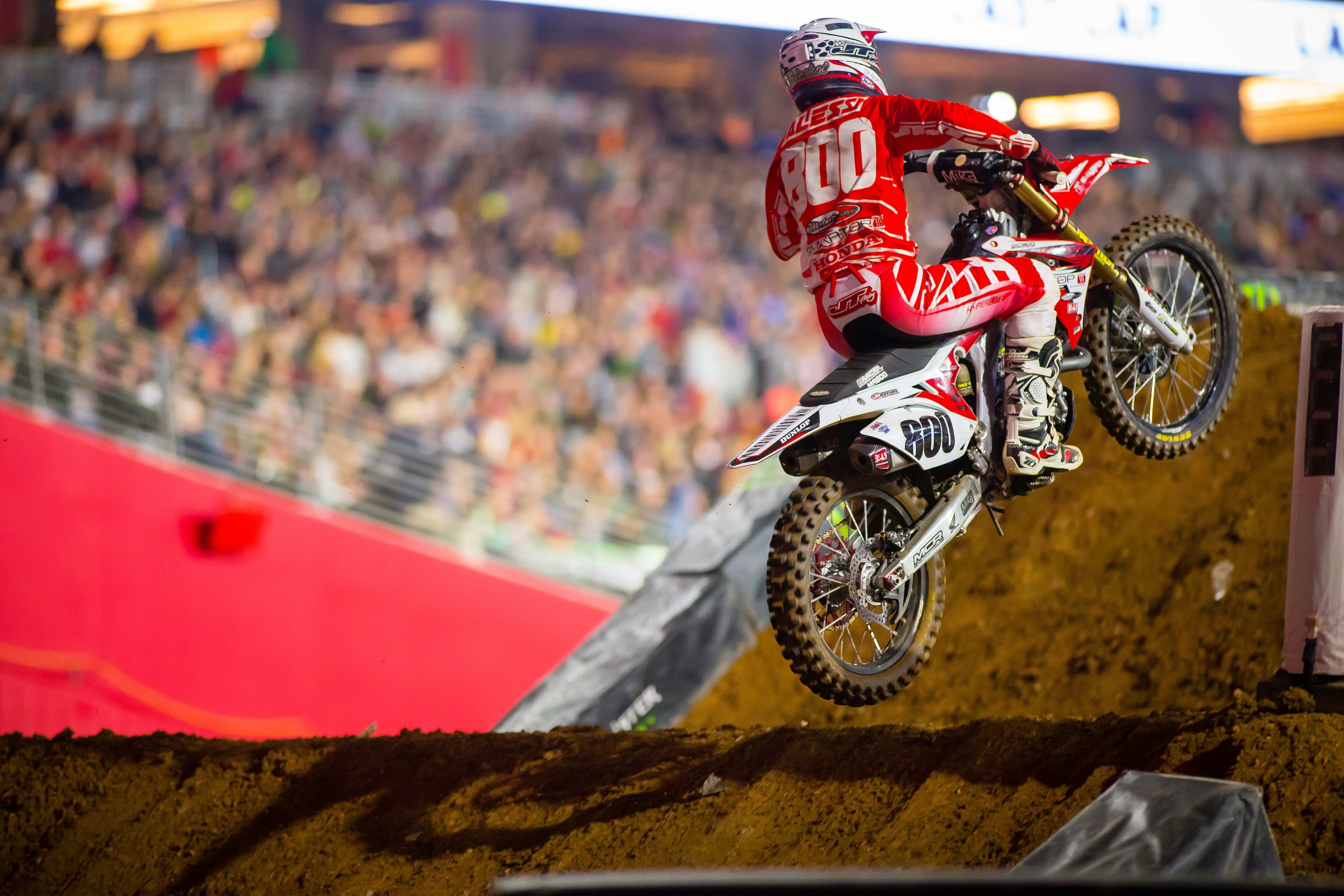 If you’re wondering how the riders in the 250SX East and West Regions would do against each other you’re in luck. This weekend is the first of two 250SX East/West Showdowns, in which the riders from both regions will square off against each other for valuable championship points, and of course, bragging rights. So if you’re currently locked in a bench race battle with a buddy over which region is best, Saturday is your chance to settle things once and for all. –Aaron Hansel

Speaking of East/West comparisons, is anyone wondering how Cianciarulo and Forkner would stack up against each other on a supercross track? Both have won the last two races they’ve been in, both are leading the points, and they’re both on the same equipment. Valid arguments could be crafted in favor of either rider’s supremacy, but you never really know until the gate drops. We’ll see which teammate has the upper hand this weekend in Atlanta. –Hansel

After Eli Tomac won in San Diego there was some speculation he might go one of his patented win streaks. After all, he’s done it plenty of times after getting that first win out of the way. Well, that didn’t happen following his first win of 2019 in San Diego, and Tomac was sixth in Minneapolis even ended up 12th in Arlington in very un-Tomac-like fashion. He won last week though, and he looked an awful lot like the dominant Tomac we’ve gotten used to seeing in the past. Might that winning streak we thought was coming after San Diego arrive in Atlanta? –Hansel

As long as we’re on the subject of ups and downs, we’ve got to talk about the mercurial Chad Reed, who ended up back on the box last week for the 132nd time. Yes, you read that right, 132. That’s more 450SX podiums than most racers have 450SX starts! It might not be his last either—Reed sometimes has a way of stringing good rides together. Will he follow his Detroit podium with another on-the-box result in Atlanta like he did in 2016 in San Diego and Anaheim? Or was last week a flash in the pan like his second place in Phoenix in 2017? -Hansel

Before San Diego both 250SX West Monster Energy/Yamalube/Star Racing Yamaha riders, Colt Nichols and Dylan Ferrandis, were doing well. Nichols won the opener and held the red plate, and Ferrandis, although winless, was only five points out of the lead. Things went south in San Diego though, where Nichols finished 10th and Ferrandis had a mechanical DNF. Nichols is now 10 points out of first, and Ferrandis is 12 points back. Certainly not where they’d like to be, but if they’re able to log a couple of good rides in Atlanta it’d go a long way in helping them claw back into contention. -Hansel

Despite sitting second and third in points, neither Ken Roczen nor Marvin Musquin have a win through eight rounds. Both riders have spoken about playing the long game, and Roczen has been tantalizing close to grabbing his first win since 2017, but so far both have been shut out. Is this FINALLY the weekend one of them get a W? -Chase Stallo

Honda HRC’s Cole Seely was sidelined last weekend in Detroit due to a sternum injury. Seely qualified sixth fastest but elected to sit out the racing after reportedly taking a rock to the sternum in the first timed practice. Seely has rehabbed all week and will race this weekend. We’ll see how he does in his return. -Stallo

Trailing 250SX West Region points leader Adam Cianciarulo by eight entering the weekend, Atlanta could mark a pivotal round for Shane McElrath’s title hopes. If Shane can grab a win, and have a few guys get between he and AC, it could be a massive points haul this weekend for the Troy Lee Designs/Red Bull KTM rider. Can Sugar Shane grab a win this weekend? -Stallo

After a few years in Amsoil Arenacross, Jace Owen will return to Monster Energy AMA Supercross this weekend, making his first appearance since 2015. Owen, riding for Phoenix Racing, wrapped up two titles in the Kicker Areancross Championship last weekend, and will contest the remainder of the 250SX East Region. “I definitely have some goals and where I feel like I should be and could be,” Owen told us in December. “Definitely just want to stay healthy and build the whole season. As long as there’s improvement every round, that will be awesome.” Starting the season at the East/West Showdown certainly won’t be easy, but Owen will be worth keeping an eye on this weekend—especially for all the fantasy owners out there. -Stallo

With Vince Friese and Malcolm Stewart sidelined, Smartop/Bullfrog Spas/MotoConcepts Honda called on a familiar face to fill-in at select rounds of supercross. Mike Alessi, son of team manager Tony Alessi, and former MCR team rider, returns to supercross this weekend for the first time since 2017. Alessi is racing the Rockstar Triple Crown Championship in Canada this summer and told Steve Matthes on the PulpMX Show earlier this week that he’s been doing motos, so he’s in shape, but that it may take time to adjust to supercross. We’ll see how he fares in his return tomorrow. -Stallo