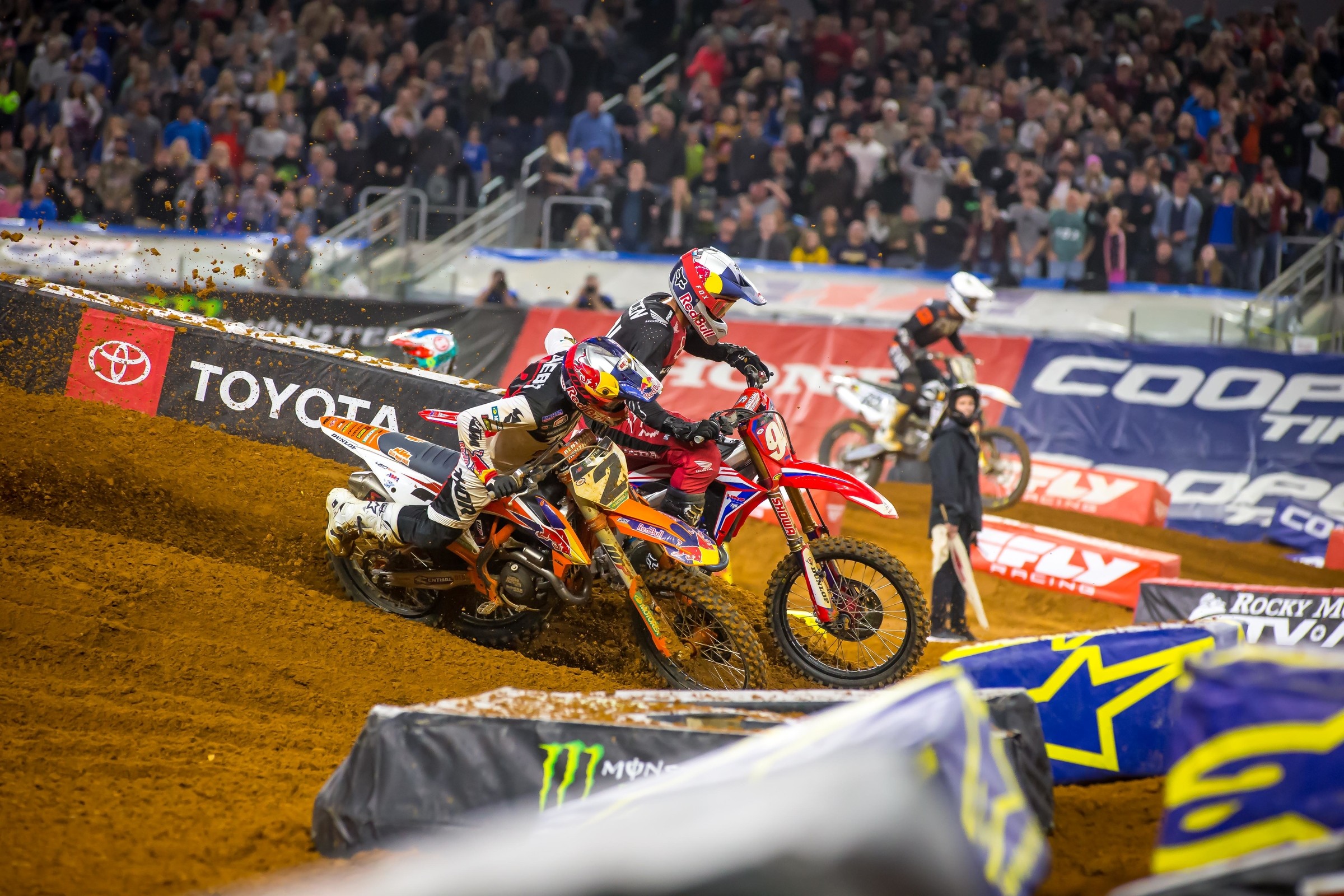 It’s a season already chocked with records for parity, closeness and competition, but the Arlington supercross just launched the 2019 season of Monster Energy Supercross into the stratosphere. The finish alone is the headline—and scant .023 seconds separating first and second after 20 minutes and 1 lap of racing at AT&T Stadium. But while so many numbers prove this year is close, one other facto points a different direction: Cooper Webb just keeps on winning, and winning, winning and winning.

This one, the Red Bull KTM rider’s fourth in the first seven rounds of the season, was his most dramatic and convincing yet. This was a track many decided was too fast and simple to provide separation, and thus absolutely required a good start to win. Webb, though, didn’t get a good start. He was about sixth early while his primary rivals, Eli Tomac, Ken Roczen and Marvin Musquin were up front. For most of the race, it looked like a points hunt for Webb. He could have settled for a podium and lived to see another day. But the same fire in the belly that provided Cooper’s power in his 250 days, is now burning on full blast again, and he simply would not settle. Tomac crashed, Webb made moves on Joey Savatgy and Blake Baggett, and then he tracked down his teammate Marvin Musquin, figured out a way to make a clean pass for second, and then poured his heart into catching Ken Roczen for the lead. Cooper even started busting out a big quad on his way forward. On the last lap, he was on Roczen’s rear fender, and then he squared him up in the final turn, drew alongside, and got out of the turn quickly enough to steal the lead and the win. From sixth, Webb had gone through his rivals for the victory, stealing it in the last turn. It was one of the best supercross races ever, that much is true. But what will be its true place in history? Will it be remembered as a final statement of Cooper Webb’s reemergence as one of the biggest talents in the sport? Depends on how the rest of this championship goes for him—for now, he’ll have the red plates back on his bike next weekend in Detroit.

“It kind of went through my head,” said Webb about possibly settling for a podium finish. “There was a decent gap, not a huge gap, then I was able to bite into it a little. I was like hey, we got a lot of laps left. I had a few laps of getting squirly, but I knew if I gave it my all, regardless of position, I knew I would be happy. But yeah it’s crazy how it turned out.”

Webb got to Roczen with two turns left, and a set of whoops. That section just happened to be Roczen’s weakness.

“Well, this was one of those spots I struggled in throughout the main event, the turn before the whoops, and the whoops, just going side to side and getting off balance there,” said Roczen, of Honda HRC. “I feel like if I could have done that better or worked better with the bike I could have kept my flow a little bit better and maybe kept that gap between first and second. But, unfortunately, this is just things to learn from I’m using that for fuel for next weekend. I feel like I’m getting better and better. Obviously finishing second after leading the whole race is not so fun, but overall we’re healthy and still in the championship.”

“I knew it was going to come down to the whoops,” said Webb. “I could tell where I was going to catch him a little bit. I was able to do that quad into the turn a few times, but I wasn’t sure I could do it with him guarding the inside. I kind of knew what was going to happen in the last turn. As a racer you never know what direction you want to go, or the other guy wants to go. I saw the opening and dang, what a close race, I didn’t even know I won until I saw the big screen. Yeah, it was an incredible race for sure.”

Third came Musquin, who was close to challenging Roczen for the lead for several laps, but then was challenged and passed by Webb, and lost touch. “Definitely looking for a first win, but in the big picture being on the podium the last five is super important, especially on a night when I don’t do good in the heat race,” said the Frenchman. “It’s good but not good, I wish the riding was a little better. I started to tighten up and lose positions and time. Try to be stronger, like I say every weekend, I’m still trying to get better and stronger, the off season was off for me. I’m still building.”

Three of the four title contenders coming in to the race proved their worth with podium finishes. Blake Baggett was close to the leaders for awhile and took fourth on his Rocky Mountain ATV/MC KTM. Monster Energy Kawasaki’s Joey Savatgy ran another good race to take fifth. But missing from the top five was Eli Tomac, who had won and taken the points lead just two weeks ago. Tomac led the race early, but Roczen passed him, and as Eli settled in to try to chase him, he tucked his front wheel and went down. Tomac got up in around seventh, but then started to struggle mightily. He kept going backwards, ultimately finishing 12th. We stopped by the Monster Energy Kawasaki truck after the race but the team didn’t yet have an explanation for Eli’s struggles.

Cole Seely had a solid night and finished sixth, going back and forth with Savatgy for fifth, and also winning his heat race. Justin Barcia overcame some heat race drama (Tyler Bowers took him out with a huge block pass, leading to Bowers getting DQed for the night) to win the LCQ and take seventh. Dean Wilson was eighth, and Aaron Plessinger and Justin Brayton rounded out the top ten.

In 250 SX East, Monster Energy/Pro Circuit Kawasaki’s Austin Forkner kept rolling with his second win in two races. This one was tough, as GEICO Honda’s Chase Sexton and Troy Lee Designs/Red Bull KTM’s Jordon Smith tried to run him down, but both riders bobbled—Sexton stalling and crashing, and Smith going down in the whoops. Forkner fought hard to maintain his gap and hold on for the win.

“Every rider has those spots where you can see the guys, in your periphials. I could see them every lap, sometimes I wasn’t even trying to look at them, but I could see them. Chase and Jordon were realling me in, and I kind of held by breath the first couple [laps]. I was having trouble with my breathing, and I got a bit of a stomach cramp, and that made it even harder to breath So I told myself, I could push over my head, and take a chance of throwing it away, or I could back it down into my comfort zone, and, I mean, if I get caught and passed, then that’s’ it. I actually caught my breath toward the end of the race, and toward the end I started matching Jordon’s time, he wasn’t catching me anymore. I was pretty confident I could have hung on to win, but then something happened to him, I don’t know, I heard he crashed in the whoops. I just brought it home after that.”

When Sexton stalled and Smith crashed, it opened the door for another solid finish for Monster Energy/Star Racing Yamaha’s Justin Cooper. He took second, a one-spot upgrade from his third last week.

“Felt like we built a little better this weekend, and obviously one step further up the podium,” said Cooper after just the third supercross of his career. “The tracks are challenging and we’re going to work on this during the week, go back to the drawing board and see what we can fix.”

Sexton recovered for third but wasn’t happy. He’s looking solely for his first career supercross win. “I was really soft on my shock early in the day, we made it stiffer, and I’m really happy about how my team made it better,” said Sexton. “That main event, man, it was there. I had what it took to win that race, just two small mistakes.”