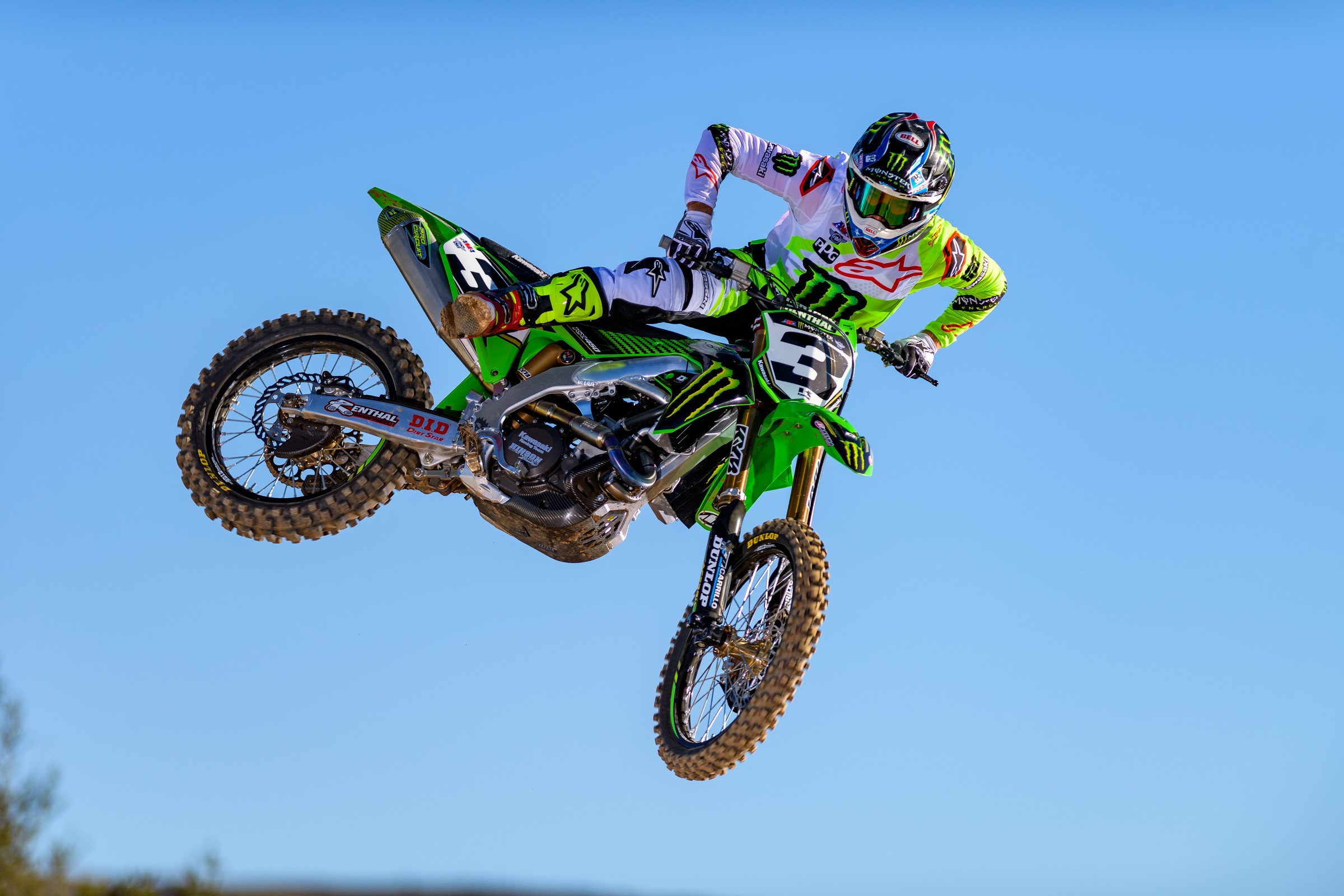 Jacob Hayes just might be world’s most experienced rookie. Although the Cycle Trader/Rock River Yamaha rider has been racing professionally for years and even won the last Amsoil Arenacross championship, he has yet to contest a single round of Monster Energy AMA Supercross. That’ll change this Saturday when Hayes lines up to do battle in the 250SX West Region in Anaheim. We’ve seen arenacross racers like Tyler Bowers do great in supercross before, but we’ve also seen them struggle. Which will it be for Hayes? –Aaron Hansel

The words “slow” and “Eli Tomac” aren’t usually found in the same sentence, but when it comes to Monster Energy AMA Supercross, it’d be fair to call the Monster Energy Kawasaki rider a slow starter. Since moving up to the 450 Class in 2014, the season opener has not been great for Tomac. In fact, he’s never even been on the podium there! In 2018 he DNF’d, he was fifth in 2017, fourth in 2016, twentieth in 2015, and he didn’t even make it to the main event after colliding with Wil Hahn in a heat race in 2014. We’ll see if he gets his opening round woes solved this time around. –Hansel

At this point it’s impossible to predict when Chad Reed’s last season will be, but one thing we know for certain is, it wasn’t 2018. After putting together his own effort last season on a Husqvarna, Reed comes into 2019 aboard the JGRMX/Yoshimura Suzuki Factory Racing Team. That’s not the only difference, either—he’s also relocated from his Florida facility to North Carolina, where all he has to worry about his own program. We’ve seen plenty of surprises and hero rides from Reed in the past, and now that he’s less encumbered we just might be in for a few more. –Hansel

When Cooper Webb first moved up to the premier class in 2017 there was plenty of hype surrounding him. And for good reason—he’d won the 2016 250 Lucas Oil AMA Pro Motocross Championship and had a pair of 250SX West titles to validate his superb supercross skills. But due to a variety of reasons, Webb’s big bike rides, for the most part, were overwhelmingly average for such an accomplished rider. Things could be different in 2019 though—Webb’s on a new team, Red Bull KTM, and is on a new training program at Baker’s Factory in Florida. We’ll see if the change in scenery translates to championship-caliber results. –Hansel

Flying at the Test Track

Yeah, we hear that quite a lot this time of year, and about plenty of riders too. Justin Hill is one of them. It’s not hard to believe he’s going fast on the 450 either. He’s long wanted to graduate to the premier class and, while moonlighting last year in Tampa, had a stunning ride going before bumping with Marvin Musquin and going down. Hill is one of those riders who on any given night has the potential to uncork some magic. If he’s gelling with the 450 as well as we’re hearing, we could be in for some fireworks in 2019. -Hansel

It’s a bit strange to think that the defending champion is not thought of as the favorite heading into a new season. Yet, here we are, as Jason Anderson, coming off his first career 450 title, enters 2019 as an “underdog.” Even Jason knows he’s not a favorite in the eyes of many. “I’m going into 2019 and people still don’t think the same of me, you know?” said Anderson in the 2019 Monster Energy Supercross Preview Show on NBC. “They still kind of think I’m the underdog. They don’t think I can win it again, but I’m going to try my butt off.” Anderson doesn’t seem to be bothered by this. In fact, he may actually prefer it. He’s more Villopoto than McGrath. He doesn’t want the spotlight to cast only on him. Really, though, he’s more Ryan Dungey, whom he trained with at Aldon Baker’s. His strength was consistency last year, as he found the podium in 11 of 17 rounds, finished outside the top five just twice, and captured four wins. While that’s not quite RD level, it’s close. Can Anderson start his title defense with a win this weekend? -Chase Stallo

Can Marv Get It Done?

Is this the year Marvin Musquin finally captures a 450 title? Consider this, over the course of the last four major championships—450SX and MX—Marvin Musquin has finished: 2-3-2-2. In 2018, a crash—and subsequent shoulder injury—in Houston sunk his title chances. This year, Musquin is entering the season behind the eight-ball, as he dealt with a knee injury this off-season. “Our off-season didn’t go as smooth as the one last year but we worked hard and we are very thankful to be lining up at A1,” he said in a press release. “We are ready for the challenge of the 2019 championship!” This off-season Musquin made another big change: he brought on fellow Frenchman David Vuillemin as a riding coach. Musquin is hoping DV can help him in the whoops, long a source of frustration for the former 250SX Champion. -Stallo

Nothing like switching bikes a week prior to the season opener. But for Justin Bogle, who had put his own deal together for 2019, there was no chance he was passing up an opportunity at a factory ride. It’s why he jumped at the opportunity to fill-in for Benny Bloss (torn ACL) on the Rocky Mountain ATV/MC-WPS-KTM team. “It’s been a bit turbulent, if you will,” Bogle told Steve Matthes earlier this week. “A bit difficult here the last few months. But it’s honestly been pretty fun. I’ve been learning a lot.”

If Justin needs to look at a source for inspiration, he doesn’t need to look far. A year ago, Justin Barcia was in a similar position. He’d put his own deal together before Davi Millsaps got hurt and he secured a six-race deal with Monster Energy Factory Yamaha. He turned in a great year and inked a two-year extension with the team this off-season. “I came in as a fill-in guy and did some good stuff. I was solid through the beginning of supercross and had a little injury and came back and had a couple good races and was then solid through outdoors,” Barcia told Racer X this week. “I don’t want to just be the solid guy. I have goals to win championships. That’s my goal and that’s what I want to do maybe before I retire.”

We’ll see how the Justins begin the new year on Saturday. -Stallo

No Zach Osborne this weekend, as he underwent surgery to fix a collarbone injury yesterday and is expected to miss the next four to six weeks, but aside from Hill, two other high-profile rookies will make their 450SX debuts this weekend: Aaron Plessinger and Joey Savatgy. We got a glimpse of Savatgy in the premiere class at the Monster Energy Cup, where he put in a solid podium performance. Meanwhile, Plessinger is the latest double champ to enter the 450 class with a ton of hype. “I still kind of get chills thinking about it, you know? I finally made it to where I’ve wanted to be since, shoot, I was a little kid,” he told Racer X ahead of his debut. “It’s just crazy to think about, but yeah, I’m really excited.” We’ll see who handles the pressure of the opener best on Saturday. -Stallo

Heading into the opener we actually have a pretty good idea of which riders will be racing which coasts. (Read the full 250 Team Guide here.) Monster Energy/Pro Circuit Kawasaki will be Adam Cianciarulo and Garrett Marchbanks; GEICO Honda will be RJ Hampshire and Cameron McAdoo; Troy Lee Designs/Red Bull KTM will be Shane McElrath and Sean Cantrell; Rockstar Energy Husqvarna will have Michael Mosiman; JGRMX/Yoshimura Suzuki will be Jimmy Decotis and Enzo Lopes; Monster Energy/Yamalube/Star Racing Yamaha will be Dylan Ferrandis and Colt Nichols. Stacked!

Of the riders listed above, only two—AC and McElrath—have wins in 250SX and none have any career 250 titles (SX or MX). With AP, Savatgy, Osborne, and Hill all moving up, the 250 class appears to be wide open this year! -Stallo