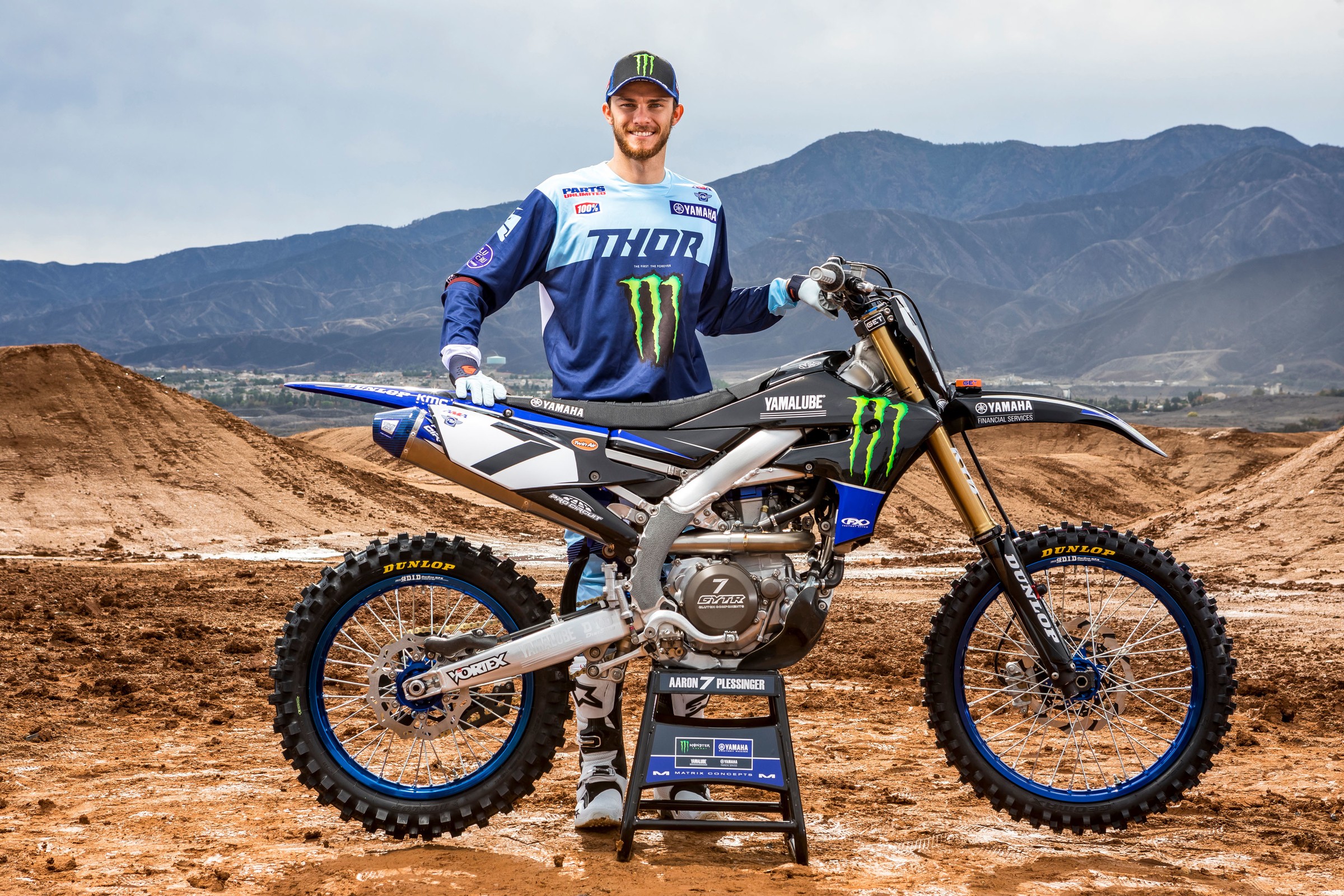 “I’m as loose as a goose,” laughed 450SX rookie Aaron Plessinger from the innards of his pickup truck cab the day before the 2019 Monster Energy AMA Supercross season opener set for Angel Stadium on Saturday. And being “loose” (as he puts it) sure as hell has seemed to work out well for the Monster Energy Factory Yamaha racer.

The son of heralded GNCC champion Scott Plessinger, Aaron will make his debut in 24 hours’ time when the world’s best motocross and supercross competitors go to the starting gate for the very first engagement of the new race season. As we all now know, Plessinger has proven that he can both win races and championships on the 250cc bike, but what of those other 200cc’s?

Both a unique talent and personality, if anyone can make it happen, it’s this guitar-picking family man from the Buckeye State.

Racer X: Aaron, well, we’re all on the way to Angel Stadium of Anaheim for the opening round of the 2019 Monster Energy AMA Supercross. Where are you at and what are you up to?
Aaron Plessinger: I rode yesterday. We went to Yamaha and did a little sprint work to get my speed down to put it into the main event, which I’ll have no problem doing. Yeah, we worked on some starts too and got pretty comfortable for the weekend. The day before that we cycled and on Monday we rode and did a couple of motos.

Have you and your teammate Justin Barcia been riding together as we close in on the race tomorrow?
Yeah, we get out there and duke it out sometimes. He’s on another schedule sometimes, but we’ve ridden together quite a bit.

Reigning 250SX West Region Champion and Lucas Oil AMA Pro Motocross 250 Class Champion heading to Anaheim 1 as a full-on factory Yamaha rider. Dude, you’re on top of the world right now, huh?
Yeah, it’s crazy. I still kind of get chills thinking about it, you know? I finally made it to where I’ve wanted to be since, shoot, I was a little kid. It’s just crazy to think about, but yeah, I’m really excited. I think I’m good and prepared to go do some battle and get up there and run with the front runners. My starts are good, so I don’t think I‘ll have a problem doing that.

As you well know, race day at any stadium adds up to a long day of practice, qualifying, and racing. Do you foresee or anticipate having to adjust to anything on Saturday now that you are in the bigger classification?
I think it’ll be somewhat the same, but I think it’s definitely going to have its challenges and its differences. But as the day rolls on, I’m going to focus on getting out on the track one session at a time. I’m not going to worry about what is going to happen, I’m going to worry about what I need to do and what’s going on as I’m getting on the track.

Have you seen any of your 450cc competition out and about? And what I mean by that is that while you guys are at the Yamaha test track up in the hills of cosmopolitan Corona, California, can you look around at the other test tracks and see who has been doing what? Do you have a read on anybody?
I haven’t really been paying attention that much. I’ve really just been trying to focus on myself and get what I need to get done. I’ve seen a couple videos and I’ve seen a coupe riding at their tracks, but I’m just trying to do me and I might see them at the races, you know? I’m hoping they’re behind me.

You and Justin Barcia are teammates and you get along well, and you have, personally, really settled in at Yamaha. This is a big, world class racing effort you’re now a part of, huh?
Oh yeah. Everything has come together. I’ve only really been on the bike for about a month now since I hurt my back a while ago. These past two weeks everything has just kind of been starting to click and I’ve been getting closer and closer to Justin, even though he is on another level right now with speed. I’ve just been trying to learn from him and watch him and get my bike set up right. These last two weeks everything has been clicking and I’ve been doing my motos and getting everything ready for the weekend.

Any word on the other members in the 450SX rookie class that will be slotting in behind the starting gate come Saturday night?
I’ve heard Joey [Savatgy] is riding really good and he obviously showed that at Monster Cup. I know Justin Hill will be good. I guess Zach [Osborne] is out with a collarbone injury. You know, I think they’re going to be really good and it’s really going to be a tough year this year for everybody. I think it’s going to be a real fast-paced supercross class. Not that it hasn’t been in the past year, but with a lot of us moving up, it’s going to add just that much more speed to the class.

Anaheim 1. You’ve done it before on a 250cc bike. Is there another race like it?
Uhm… You know, shoot, it’s one of its own. Everybody is going to come in prepared and thinking they’re going to win, but nobody will really know until we get out on the track and throwing out laps times and getting the rhythm sections down. The track looks really, really good this year. They’ve already built the track and we’ll do press day today and we’ll see where everybody lies on Saturday.

KABC here in Los Angeles is jumping up and down about rain on Saturday. No worries for you, eh?
Oh no, no… That excites me! I’ve heard everybody saying, “Oh no, it’s going to rain!” First round rain? That could be good for me.

Whether it was Jeremy McGrath, Jeff Emig, Ricky Carmichael, Chad Reed, Ryan Villopoto, or Ryan Dungey back in the day, they all seemed to have the same stance coming into A1: “I want to get this race done just so I can see where I am at.” Does that make sense?
Yeah, definitely. Everybody is pretty much in the unknown until that first race hits. Everybody kind of finds their spot and knows where they’re at or knows what they need to work on. I definitely want to get out there and see where I am and see what I have to improve on and see where I’m at with all of these front runners.

What type of performance or result will make you pleased come time to walk out of the pit area at Angel Stadium around midnight on Saturday?
I really, really want to go out and prove myself and maybe a top five will really, really pump me up and get me going. I’m going to go out there and have as much [fun] as I can and who knows… We’ll see where I land it and if it’s top five, great. If it’s top 10, I’ll be happy but I’ll know that I’ll need to put in some more work on my weaknesses.

How’s the team? Any sort of read on expectations?
I think they’re expecting some big things out of me. It’ll probably give me at least the first two races to get my groove on and to really push myself. I think after I get my flow week-in and week-out and doing my thing, I think that’ll be good and I think they’ll be happy with me.