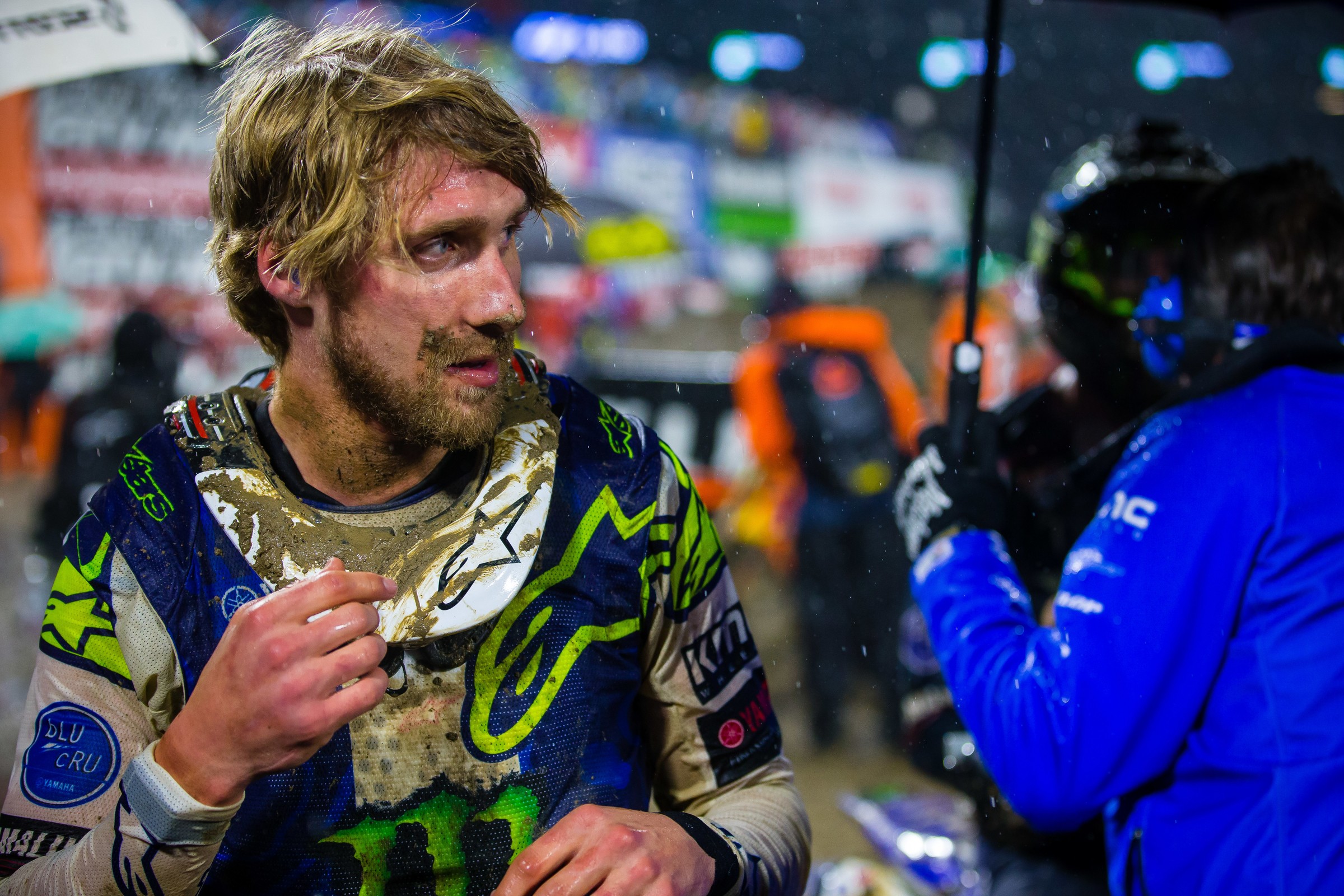 450 Words Not Just a Mudder

It’s impossible not to call the race winner a winner. But this Justin Barcia victory is about more than just winning this one race. We already know Barcia is a great mud rider. He also won the final Lucas Oil AMA Pro Motocross Championship round of 2018, which was also a mudder. His last supercross win, way back in 2013 in Seattle, featured similar conditions to Anaheim 1 on Saturday. Barcia, raised in New York, understands the art of racing in the rain.

But he could have easily won this race in the dry. When the track was dry in practice, he was right there in the lap time battle, but he impressed with more than just his speed. Barcia’s wide-open style often looks fast, but rarely has he looked this precise. Everywhere Barcia went looked like exactly where he wanted to go, instead of his tendency to just twist it, bounce wherever he ends up, and hold on. His moves looked planned and calculated. No unneeded whips, no additional revs, no wheelies from grabbing too much. This was the epitome of comfort and confidence, which is not a common site from riders dealing with the nerves of Anaheim 1.

Then Barcia walloped them in his heat race, and then said he did it by “slowing down to go faster.” Barcia has had people in his camp preaching this for a decade, and he probably executes it during the week. But when the races start and he goes into combat mode, he tries to rise to the occasion and push harder. It’s awesome that he’s a fighter like that, but it can lead to riding and revving too hard at times. Didn’t happen this time. In the heat race, he rode totally within himself.

In the main, Barcia started top three, and with his confidence from the heat race and the mud, it was tempting to just go crazy and pin it to the front. Remember the first lap of the Unadilla National second moto last summer? That was the one where GNCCer Kailub Russell saw Barcia bouncing off the rev limiter and knew it would end badly (and it did, when Barcia went careening from one side of the track to the other and took Russell down). Yeah, this could have become that, but it didn’t. Barcia got a little wild on the first lap or two, but then he settled down. The wild child settled in for a calculated race.

“It was good tonight because I was in third for a long time, and I was just consistent and smart,” Barcia said. “I was kind of proud of myself, because I usually ride over my head a little bit and try to get into the lead fast, but I stayed there for a little over half the race and made the passes when it counted.”

A few times, Barcia and a chasing Ken Roczen closed in on race leaders Dean Wilson and Malcolm Stewart. Barcia resisted going for the kill, though, and merely made sure to stay close.

“I knew I could win it, for sure, but mentally I was just thinking ‘When am I going to make this happen?”’ Barcia explained. “Malcolm would close up on Dean, and I was kind of just there… it worked out, when Malcolm fell. I knew I was faster than both of them, so when Malcolm went down I made a charge on Dean, made a good pass and kinda checked out.”

Barcia’s two previous 450SX wins, both in 2013, started with a holeshot and ended with him leading every lap. He only led the final six here.

Speaking of 2013, this win busted several old slumps. Barcia had not won a 450SX main event in six years. A YZ450F had not won one since James Stewart’s Daytona SX win for JGR in 2012. And the actual factory Yamaha squad, which ceased to exist for several years, had not won a main event since Minneapolis in 2008, with Josh Hill on board.

Based solely on the numbers, this looked like a historic, monumental win, but it didn’t resemble that. Barcia treated the victory the way championship contenders do—like he had been there before. We didn’t see wild celebrating, no taunts of “I told you so!” or “we’re back!” No trash talk. In fact, Barcia seemed more subdued than usual during the post-race press conference. As massive as it is for Barcia to finally be back on top of the supercross box, he wants this victory to merely serve as a small part of a championship run. So the remaining 16 rounds have to be the focus, instead of the result on this Saturday night.

Just as well. Rain or shine, round 1 or round 17, Barcia wants this to seem like nothing more than a normal day at the races. On Saturday night, it looked it.