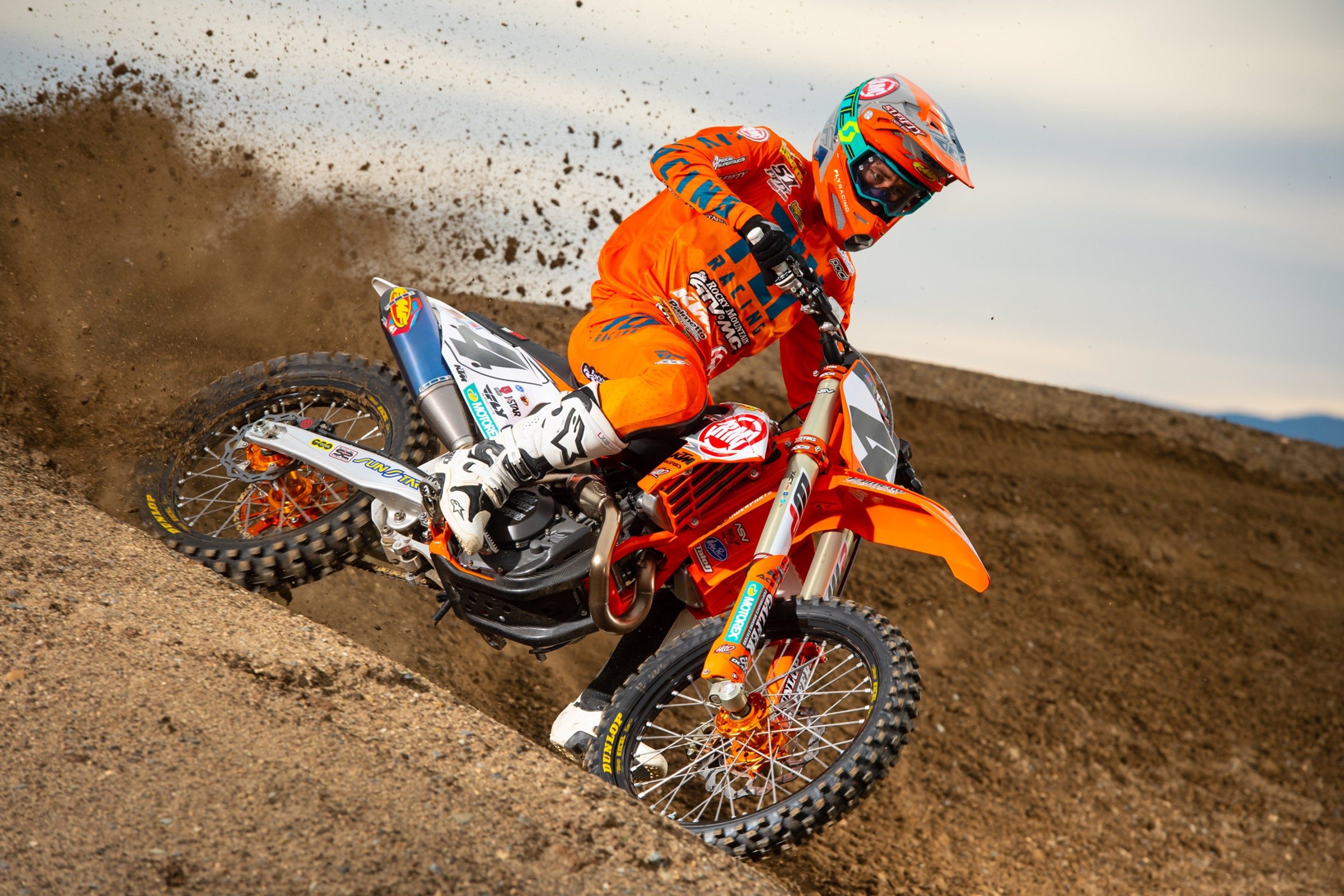 Episode 2 of the Monster Energy Racer X Supercross Preview Show focuses on four riders hoping to be consistent podium men in 2019—or even race winners. They are Justin Barcia, Cooper Webb, Blake Baggett, and Chad Reed (within our five-episode series we’ll cover many, many more names).

For this week’s 3 on 3, we bring in the panelists from the show, Jason Weigandt, Jason Thomas, and Steve Matthes for some thoughts on those riders. We’ve discussed Webb in previous weeks here, so this week we look at Baggett, Barcia, and Reed.

Jason Weigandt: He got better. His 2017 Lucas Oil Pro Motocross surge casts a shadow over everything Baggett does, and we didn’t see him reach that peak again in 2018. But he was definitely better in supercross in ’18 compared to ’17. In 2017, he found elite indoor speed for the first time, but kept blowing it with crashes and bad starts. In ’18, he took a few races to get rolling, but once he did, he coupled that speed with consistency and ran off a nice podium streak. For a few weeks, it seemed like he could win a race. I think his crash in Atlanta jacked up his tender wrist/thumb area more than he let on. Until then, it was progress.

One key for Baggett this year: he has to avoid Jason Anderson somehow. It’s simply amazing how often Anderson finds him and ruins his race, and often just when Baggett is looking good. It’s tempting to say that Baggett should just park Anderson and end it all, but we’ve seen several riders abused by Anderson through the years with little retaliation. I think that ship has sailed, and Anderson just knows to mess with the right guys. So for Baggett, unless he has a block pass the likes of which we’ve never seen in him, he needs to just ride with eyes in the back of his head.

Jason Thomas: It depends on when we are talking. In the early rounds of both seasons (January), he was way off the pace. Arm pump, never ending bike changes, and an overall lack of confidence has been the norm. Once he gets out of January, things start to turn around. He sorts out the bike which in turn ends the arm pump issue and voila, the results arrive. I think both seasons were very similar in that he wasn't himself in the early rounds, his starts were consistently great, and he had the speed many times to contend. He is capable of a podium anytime, anywhere, but until he breaks that win barrier the first time, we won't be quite sure what the ceiling is.

Steve Matthes: I think BB4 was a bit of the same. In 2017 he had some practice sessions where he was top on the board or able to put himself close to the top, but he couldn't always translate that to the race. Last season was more of the same. I think on a pure speed level he was quick both years, but he's just got to figure out the consistency thing. One thing that helped was he got on the same frame that the factory guys were on in outdoors and that helped flex issues. He'll have that mod for SX now and so maybe his bike will be a bit better.

2. Should Barcia be considered in the Anderson/Tomac/Musquin group?

Weigandt: Barcia is good but I’m still waiting for the Barcia-passes-his-way-through race to prove he’s right there with those guys. Barcia has been a good starter throughout his career and a lot of his wins came from holeshotting, fighting like hell, and holding on. Barcia is very good under pressure and can make his bike very wide.

Can he win a race if he holeshots? Yes. Can he turn a tenth-place start into a podium—which you need to do to win the title? Not sure.

One odd thing about Barcia. I feel like he looks more fluid and in control on this factory Monster Energy Yamaha than he has looked at any point in his career. But while the Yamaha’s muscular engine design usually results in big power, I feel like his starts last year where actually a little sub-par for him. So he’s riding better than ever but missing his old magic off the line. Couple his old starts with his current riding and he’s gonna do damage; but he’s got to get those starts.

Thomas: I think Weege nailed it here. That trio listed are capable of moving forward to win main events. We just haven't seen that from Barcia. His good results are almost always the result of a good start (I can't think of an instance where it wasn't). That's only a problem if he doesn't get a good start which is bound to happen over 17 weekends. Barcia is certainly capable of running up front but that extra 1 percent it takes to move to the front is where titles are won. If you could guarantee that Barcia would start top three every single main event, I would have to put him in with that elite trio. That's not reality, however. If we are being 100 percent honest, here, I would probably put [Ken] Roczen into that group before Barcia. Kenny's potential when healthy is higher. When healthy is another story altogether, though.

Matthes: No, I don't think he should be… yet. One thing we talked about that Justin denied was perhaps his "comeback" last year was due to him really not having much security. You want to talk motivation? He had plenty of it, because he had to get podiums to stay on the factory rider gravy train. Remember the best he could do for a ride was a fill-in due to Davi Millsaps getting hurt. So there was plenty of talk about how Barcia was only good because he was motivated and if he got a deal, we'd see the Barcia of the last few years. Well, I for one am not a believer of that but I do think he needed to see how the other side lived for a bit to discover that hunger again. He'll be good again, but I think he's a tick off those guys listed and yeah, why wasn't Roczen listed there?

Weigandt: I’ll use the same explanation I always do about riders on the older side. You’d think the first thing to go is the all-out speed, but it’s actually the ability to have that speed every single week that goes first. Riders in the 30-something-group then move into the “opportunist” category. On the right track, on the right night, with the right start, and the right circumstances, they can summon all the old tricks, go fast, and succeed. At Daytona, Justin Brayton upped his pace on the next-to-last lap when Eli Tomac was haunting him. Look at all the last few wins of Kevin Windham’s career. He wasn’t a podium guy every week, but when opportunity knocked, he could ramp it up. Same, actually, for Chad Reed’s last win, in Atlanta in 2015.

I think that’s where we are with Reed now. Last year was a washout and he’ll be way stronger this time. The podium-every-week-no-matter-what Chad Reed is probably not coming back, but you can see the opportunist in Chad every time he pulls a start (well, except those first two races at Monster Energy Cup. Let’s just move on, okay?). Remember that heat race with Ryan Dungey in 2017? Ahem. When he’s feeling it and gets a start, he’s going to go fast, fight, and use his full bag of tricks to make it a memorable event.

Thomas: I spoke about this on the PulpMX show Monday and echoed exactly what Weege is saying here. Chad is and always has been the most opportunistic of riders. In 2004, he dominated the series in Carmichael's absence. In 2006, any time the duo of Carmichael or Stewart faltered, Reed was there to win and take the title to the wire. In 2008, Stewart left the series early and Reed was ready and willing to take yet another title. The wins and podiums in recent years that Weege mentioned are more great examples. When the conditions are right and the situation presents an opportunity, Chad seems to always be waiting in the wings. He is smart enough to find the angles and execute. Now, at 36, he will need to utilize that same ability. He doesn't have the raw speed to blow the field away. He will need to use his good starts, use his experience to weasel to the front on the first lap, and pull out every trick in the book. It's not a coincidence that he used that grass line at Ironman. It's not a coincidence he had his best race in the mud of Seattle. He excels when others are scratching their heads. When the track is fast and easy, things might be tough for the 22. As the difficulties ramp up and conditions deteriorate, look for Chad to seize the moment. It might take six, 10, 15 rounds for his chance to pop up, but when it does, expect him to capitalize. He always finds a way to prove the doubters wrong.

Steve Matthes: Well, it's awesome that he's back. And he's in shape and happy with the bike. If he gets on the podium though I really hope he doesn't talk about how his bike still wasn't that good. Yikes, that Glendale press conference in 2017 sure started driving a wedge between him and the Yamaha guys. Anyway, yeah, I'm with the other two guys. He'll be good here and there, I think he can podium, and couldn't you see him winning a Triple Crown overall through one main win and the other two mains where he got a great start and was consistent? I'm stoked to see an in-shape and happy Chad Reed out there.