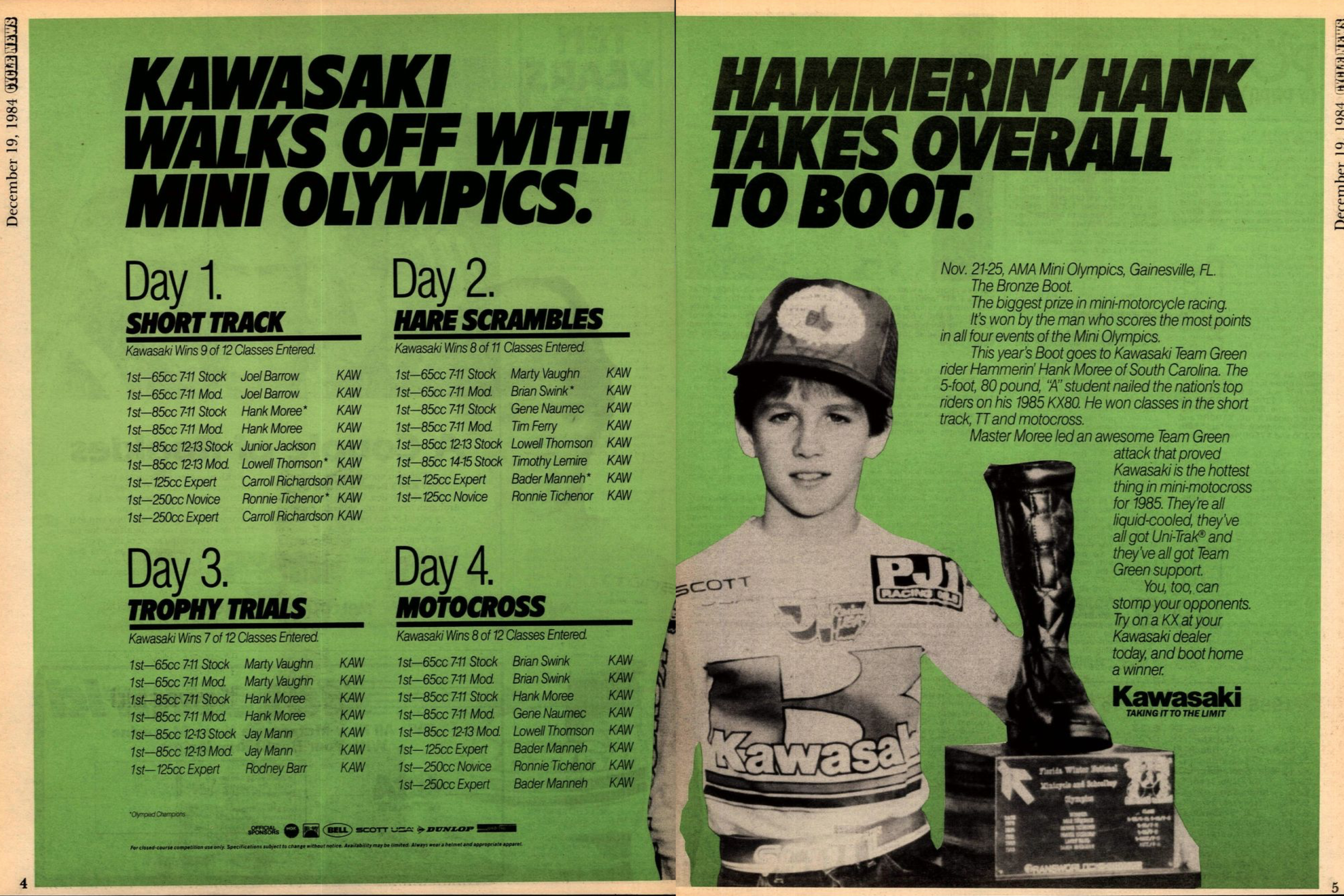 On This Day in Moto December 19

On this date in 2009, James Stewart appeared on the popular (at the time) MTV show MTV Cribs.

Motorcycling Australia, Australia’s sports-governing body, imposed a four-year ban on Matt Moss after he tested positive for Ostarine, a SARM (Selective Androgen Receptor Modulator) that mimics the effects of anabolic steroids, in a test administered on May 22, 2016, in Murray Bridge, South Australia.

The decision came just over a year after Matt’s twin brother, Jake, was issued a four-year ban for violating Articles 2.1 and 2.2 of the policy “for the presence of prohibited substances in an athlete’s sample and the use of a prohibited substance” for testing positive for Ostarine. In August of that year, Jake announced he was resigning from the National Pump/Monster Energy Kawasaki team “deciding to focus on his family and career away from competitive motocross and supercross racing.” Jake is not eligible to return until July 15, 2020.

Matt won premier class championships in the 2013 and 2014 in the Australian MX Nationals, as well as the Australian Supercross titles in those same years and was part of Team Australia’s only podium appearance at the Motocross of Nations, in 2011 at Saint-Jean-d'Angély, France. Matt competed in the U.S. in 2010, 2012, and 2014.

It was announced that multi-time FIM World Motocross Champion George Jobe had passed away after a battle with Leukemia. The Belgian was one of—in theory—best/finest Grand Prix racers that the sport has ever seen, having won the 250 class crown twice on a Suzuki and the 500 championship three times on a Honda, winning the last in 1992 as a privateer!

Jobe's career spanned 13 years, but he remained involved in the sport as a promoter and riding coach during his post-retirement years. But as a racer, he ranked among the best of all those great Belgian motocrossers who came before and after him: Robert, DeCoster, Sylvain and Eric Geboers, Everts, Rahier, Smets, and the younger Everts. Georges Jobe was 51 years old when he passed.

It was announced that SPEED would air live coverage from a record 11 races, as well as a one-hour preview show. The series would also receive nine hours of next-day coverage on CBS. Rounding out the 2013 Monster Energy Supercross domestic television package was the re-airing of every SPEED broadcast on FUEL TV.

Racer X’s Steve Matthes broke the story that then GEICO Honda rookie Chase Sexton had broken both wrists while training for the 2017 Monster Energy AMA Supercross season. The 2016 AMA Horizon Award winner eventually returned in Atlanta but sustained a broken femur in qualifying and missed the rest of the supercross season.

And you know Christmas is getting close when you see Santa on the cover.

In a letter that appeared in Cycle News, Tom Mueller, a longtime journalist and marketing man, wrote to the editor warning that the AMA and their Supercross promoters plan to go to a new format—two main events of 10 laps, with the scores added up, similar to outdoor motocross—was a bad one. Mueller called it a giant step backwards for supercross, arguing, "the one thing supercross did have going for it was that a day's racing all boiled down to one race with one winner. The media had someone to focus on, and the fans were given one decisive winner to relate to." Mueller was right, at least in doing two main events at every round, because they did try it in 1985, and it caused a somewhat confusing series, though it did go down to the very last race between Jeff Ward, Broc Glover, Ron Lechien, and Rick Johnson. One year later, the AMA went back to the one main event format.

Check out MSR's lineup of rookie talent, Oklahoma's Guy Cooper and Michigan's Keith Bowen, with Malcolm Smith in the middle.

In that same December 19, 1984, issue of Cycle News, Kawasaki Team Green ran this advertisement for "Hammerin’” Hank Moree and his big week at the recent Mini O's.