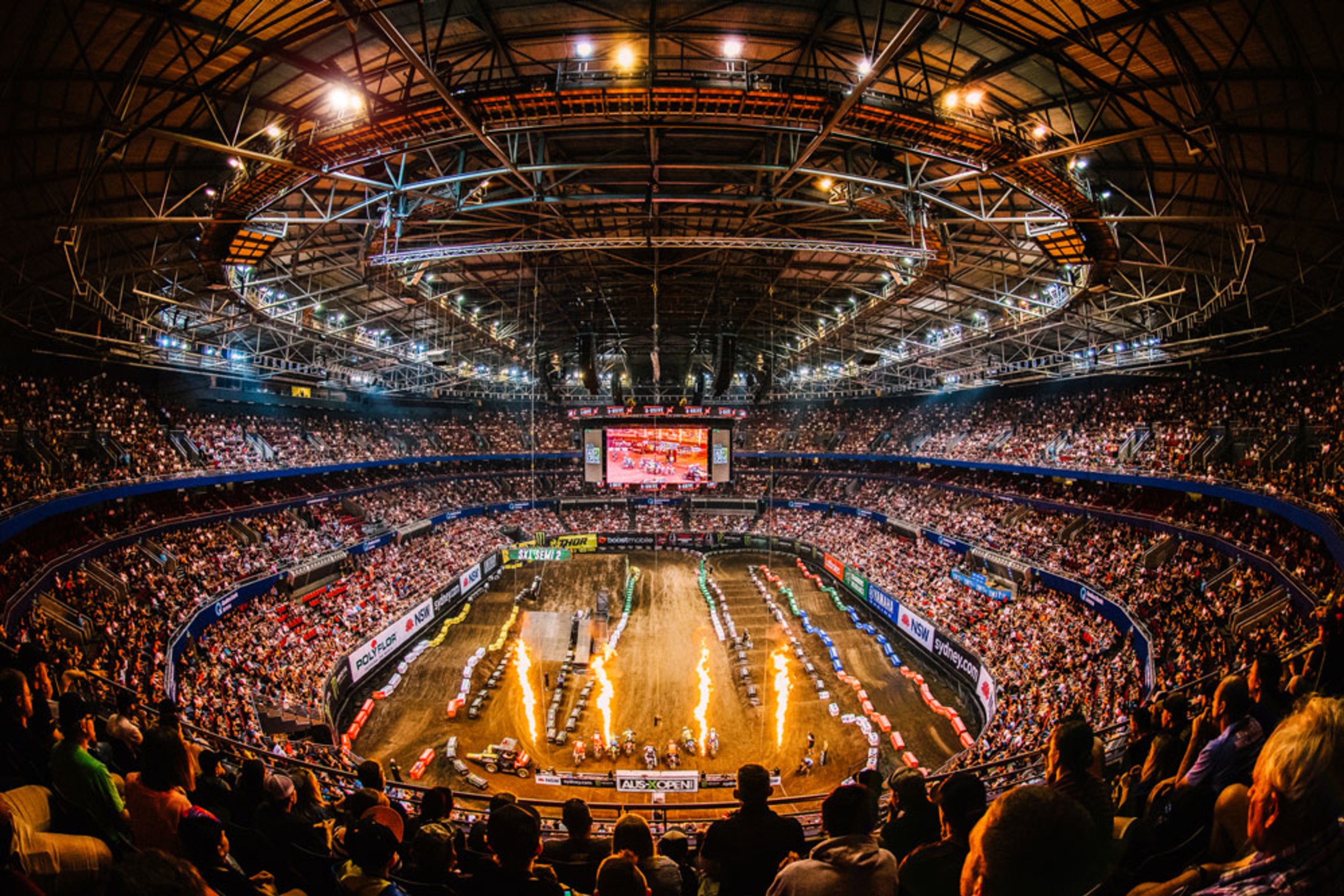 Insight 10 Things to Watch at the AUS-X Open

Get up to speed on this weekend’s event with these 10 Things to Watch.

The two-time Australian Supercross Champion is looking to seal his third in three years, however he’ll have to watch his Honda stablemate, Brett Metcalfe, who sits six points back of the American. Together, the two have swept the Australian Supercross Championship so far, however with the addition of Jason Anderson, Chad Reed, Ryan Villopoto, and more to the mix, the championship equation becomes far more complex. The game plan quickly turns from Brayton and Metcalfe squaring off, to a strategic game of chess where each rider demonstrates maturity, patience, and raw speed in a bid for the coveted #1 plate.

Hometown hero and two-time AUS-X Open winner Chad Reed has experienced a complete overhaul in recent months, most notably piloting a factory Autotrader/Yoshimura Suzuki. Reed showed that he has his starts on lock at Monster Energy Cup, and combined with being on home soil, he should be good this weekend. The Australian ace will face stiff competition; however, the move to new machinery and a different environment could pay dividends as he looks for victory in Sydney.

It’s good to be back @sxopensupercross

Having been the dominant force throughout the Australian Supercross SX2 campaign, New South Welshman Jay Wilson sits in the box seat for his first ever supercross championship. Sitting in close contention is Hayden Mellross, Wilson Todd, and American Jacob Hayes. With 25 points on the line, all three contenders are in position to nudge Wilson from the throne. Wilson won an MX2 Championship a few years back, but has experienced a number of turbulent years since that title, including stints in Europe, SX1 campaigns, and borderline retirement.

The American contingent on Australian soil is undeniably strong, with current Monster Energy Supercross Champion Jason Anderson leading the charge. Accompanying El Hombre is none other than four-time AMA Supercross Champ, Ryan Villopoto, who has his eyes on Sydney’s ultimate prize. Throw in Brayton, Jace Owen, Hayes, Cameron McAdoo, and Dakota Alix, and you’ve got a strong case for the United States to be taking all trophies back to their homeland. Will the Aussie’s withstand the heat?

With a number of riders coming out of contract at the end of the current season, the AUS-X Open will be a critical event for riders to prove their worth to prospective teams, as they look to solidify their future on the grid in 2019. Names such as Dylan Long, Luke Clout, Aaron Tanti, and Dylan Wills along with a number of others will be out to put in a strong performance in a bid to catch the eye of the top teams at the AUS-X Open.

The contingent of Amsoil Arenacross stars, both former and present, could play a major factor in determining the AUS-X Open victor, with riders such as Justin Brayton, Jace Owen, and Jacob Hayes all having raced through the coveted United States series. The tight nature of the arenacross circuits plays perfectly into their hands when it comes to the AUS-X Open track, with Sydney’s Qudos Bank Arena providing the perfect platform for the same bar banging seen in arenacross.

The format change for the fourth installment of the AUS-X Open is set to shake things up in a major way, with the introduction of the Triple Crown placing even more emphasis on the start. Three shorter, back to back main events will see riders have much less time to carve their way through the field in the event of one bad start, which could in turn have a major impact on the overall result.

Having come agonizingly close to the SX2 Championship the previous two years—in particular 2016 when his bike cut out in the dying stages of a sure championship, Hayden Mellross will be out for redemption with only 11 points separating he and Jay Wilson. If he were to win, he’d need Wilson to finish seventh or worse in order to clinch the series.

If you actually thought that after his retirement in 2015 we’d see Ryan Villopoto back in love with motorcycles and racing, well, you’re probably wasting your prognostications on this sport. You should play the stock market instead!  Seriously, the guy left the spotlight instantly, and headed back to Poulsbo, Washington. Two years later, he’s back living in Southern California, a very active ambassador for Yamaha, and willingly participating and training for races all over the globe. RV already had a hall of fame career, but now he’s seen as a fan favorite. He’s been working hard, and has set his sights on not only competing, but winning Sydney’s AUS-X Open.

[Update: Ryan has elected to withdraw from the event due to the recent death of his father, Dan. He provide this update on Instagram. Our thoughts are with Ryan and his family at this difficult time.]

I just want to share a note with the @sxopensupercross fans to sincerely apologize as I will not be there today. As you all know the last week has been incredibly difficult on myself and my family. I was super excited to race in Sydney and have been working hard to be in the best shape I’ve been in years. I really wanted to race down there, but with all that happened as well as an unforeseen issue, I have to remain home with my family. I realize a lot of people put tons of work into helping me get there and to make it super special therefore I deeply want to express my appreciation. I promise to make it up to everyone down under. Thank you for all your ongoing support see you soon

Having sat out most of the Lucas Oil Pro Motocross this summer, Jason Anderson made a successful return at last month’s Monster Energy Cup. The current Monster Energy Supercross Champion will now return to Sydney and look to defend his AUS-X Open crown after last year’s dominating performance. Fitness, race craft, and timing will be an interesting topic for New Mexico native, as the Factory Husqvarna rider had been off the bike for a while. Rumor has it that he’s been out pounding laps at the Southern Californian facility over the past few weeks, and, since he’s the actual AMA Supercross Champion at this moment, his performance should never be doubted.

Dean Wilson will also compete, and his scenario is much the same as Anderson. The Scotsman was knocked out of Lucas Oil Pro Motocross before it began and hasn’t raced since the final round of the Monster Energy Supercross Championship in May. The Monster Energy AUS-X Open Sydney will mark his first race back.