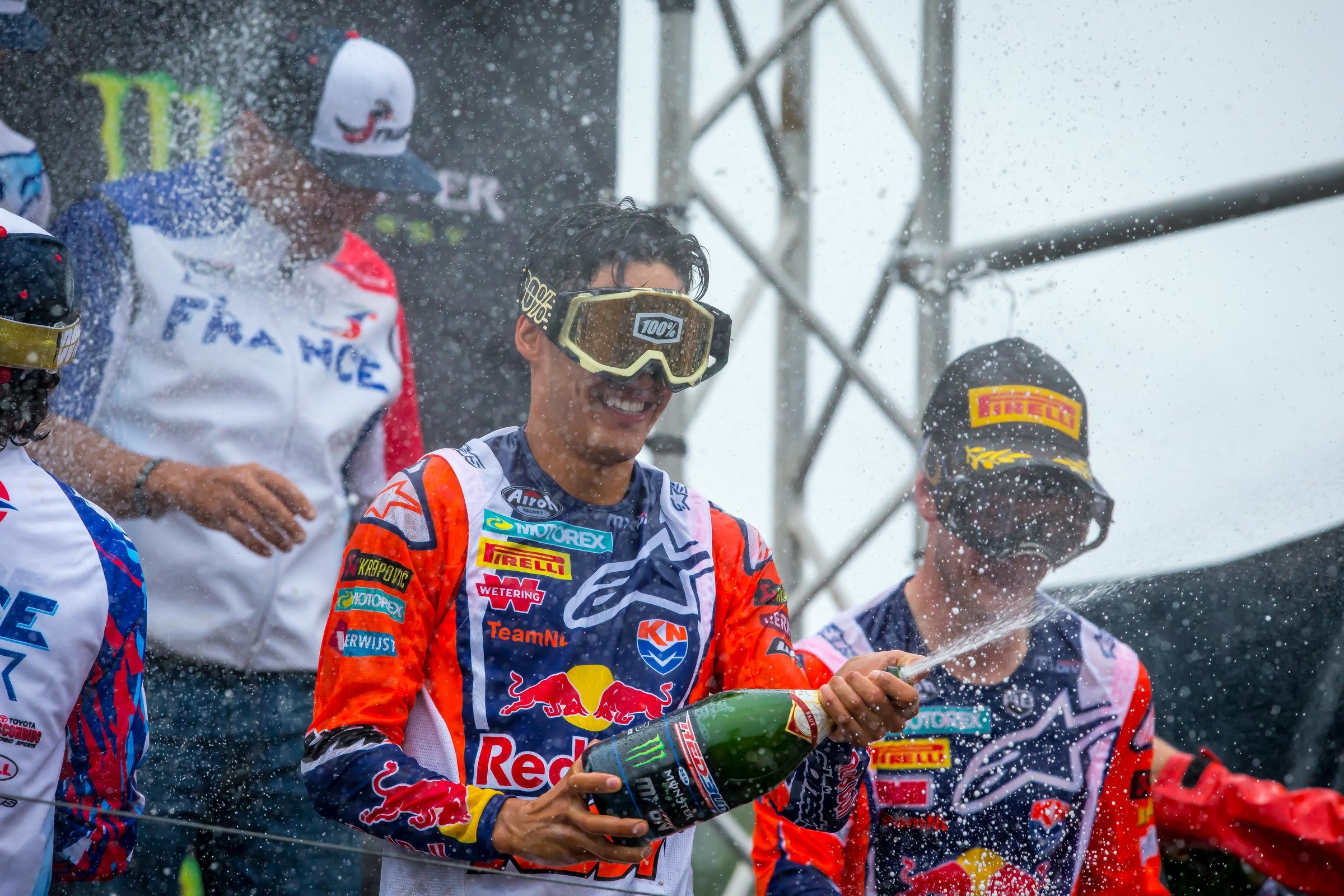 Insight Facing It Head On

Team France got the last laugh on everyone. For two months, the team—and specifically Federation President Jacques Bolle—endured criticism over not picking Marvin Musquin. When Romain Febvre went out with injury Jordi Tixier became the fill-in, but he had a trying season. Then Tixier’s bike broke in moto 2. Things looked bleak… but the French won again, this time for the fifth-straight year. Yes, Team USA looked stronger on paper, the Dutch team won all the motos, Australia and Belgium had a shot, and Italy was moments away from a shocking upset win, but this modern rendition of the French team always get it done.

“We have had a lot of judgement in the past months because it has been a tough [team] selection,” said Gautier Paulin in the post-race press conference. “Anything can happen every day. There was a lot of judgement. Right now we won again, so thanks French Federation, thanks Jordi [Tixier], thanks Dylan [Ferrandis]. We had a lot of challenge during those Motocross of Nations [wins]. I think the biggest challenge was today.”

Team manager Pascal Finot was quick to back up Bolle for his choices.

“I’m very happy for the riders, for the French motocross,” he said. “I want to thank one person, he is the president of the Federation, Jacques Bolle. It’s difficult to make a selection but the riders we have in the team must always trust until you risk it. I’m pleased to share this with my Italian friends. Happy for Europe and motocross.”

“Marvin is a great rider,” said Paulin. “He has been winning Motocross of Nations with me, so I really like Marvin. We have trained together and stuff. We have had so many good racers on the list. Dylan was the first one secured because the MX2 factory bike in America, and then we were three. Romain, Marvin, and myself, and I was chose in the team. Thanks to French Federation for choosing me. I always really give 100 percent at this race. We’ve had a lot of judgement, but this is like it is. We cannot make everyone happy. Then Romain got injured and stuff and Marvin didn’t want to come. This is part motocross. This is part of history. We are many strong racers. We forgot about everything. It’s nice to live this moment all together.”

Paulin’s season in MXGP has not been his best, he was no higher than third in a moto all season, and fifth in points. He usually steps up at the ‘Nations, though, and went 2-3 at RedBud.

“Some of these guys, for whatever reason, like France is notorious for it. They just pull something out of their ass at Motocross of Nations all the time,” said Ryan Villopoto to our Steve Matthes after the race. “They show up and it’s like on. Paulin is the best for that. He’ll show up and he might have had a so-so season, and then all of a sudden it’s Motocross of Nations, for our country? Yeah, we’re on it.”

Paulin explained that Ferrandis was a huge component of the team, because he was the only French rider with factory 250F equipment. At RedBud, though, Ferrandis soon realized in these conditions that simply avoiding a DNF was the most important part.

“Was a tough race for me today,” he said. “We had to keep the bike cool because the track was really muddy and really soft. It was kind of different than during the national. I kept the same setting as the national and they make the track a lot softer, a lot sandy. I could manage my bike [to prevent it from overheating]. That’s the most important.”

Much will be made over Team USA’s struggles at its home track. Ferrandis told our Steve Matthes how different the track felt than the RedBud National in July.

“I was surprised,” he said. “Especially today was more mud. The track was sandy. I really think I made a mistake to didn’t set up my bike for a sand race, because that was definitely the key today. I think that was a mistake from me. It was even more sandy. Also they moved some corners or some angles. The track was different than the national. It was not that easy for me and for all the guys who did the national to ride two months ago on this track, and on a so different track today. Honestly, that was not easy.”

After Tixier’s KTM blew in race two, the entire French team had to scramble with an engine swap. The FIM allows two bikes per rider, but Tixier didn’t have a second bike. They were able to get a stock 450 engine and swap it in. He didn’t have a full-race engine for race three, but the key was to merely finish. His 15th got it done.

“Team France and KTM did a really good job to find a new engine [after the engine let go in his first moto],” said Tixier. “It was a full stock bike but I managed to take a good start. That was my goal. I think I did good. I was not feeling so well with a lot of pressure but actually we win.”

In 2016 and 2017, the Dutch team finished second to France (and by just one point in ’16). This year they were stronger than ever, as Jeffrey Herlings and Glenn Coldenhoff combined to win all three motos, including a 1-2 in the race they ran together. But the team was eliminated from contention when MX2 rider Calvin Vlaanderen took a rock to the eye in race one. His bike also quit. The Dutch had to keep his 36th place finish, but 1-1-1-2-36 scores were still enough for third overall.

“My last moto we went 1-2 so we definitely deserved to win,” said Herlings. “It’s a shame. We were so close to win, but Team France was the best and we should respect that. For next year, it’s going to be a new thing. It’s going to be in Assen [in the Netherlands]. We definitely can go for the win. I think the whole season we did a great job.”

Coldehoff had just two moto podiums all season in MXGP (a pair of thirds). He went 1-1 at MXoN.

“Went 1-1 here at Nations is kind of crazy,” he said. “I have no words for that. I think this track is a beautiful track. I think the conditions were great. It’s just a shame for Calvin. He rode well. He definitely could finish inside the 15 that first moto. It was a shame that he couldn’t start the second one. I think we were very close this year. It’s been a great day. I want to say congrats to the other two teams. They definitely deserve it. We were maybe the strongest but we didn’t win. In the end, it’s been a great day. I love being out here.”

Due to the bad luck for Vlaanderen, France was able to avoid its biggest challenger. The Dutch will be gunning to finally get a win next year, on home (sandy) soil.

Patrice Assendelft, the team manager summed it up best.

“I’m looking forward to next year in Assen. I’m very proud of my team.”

He is, but no matter the odds, betting against the French team is never a good idea.