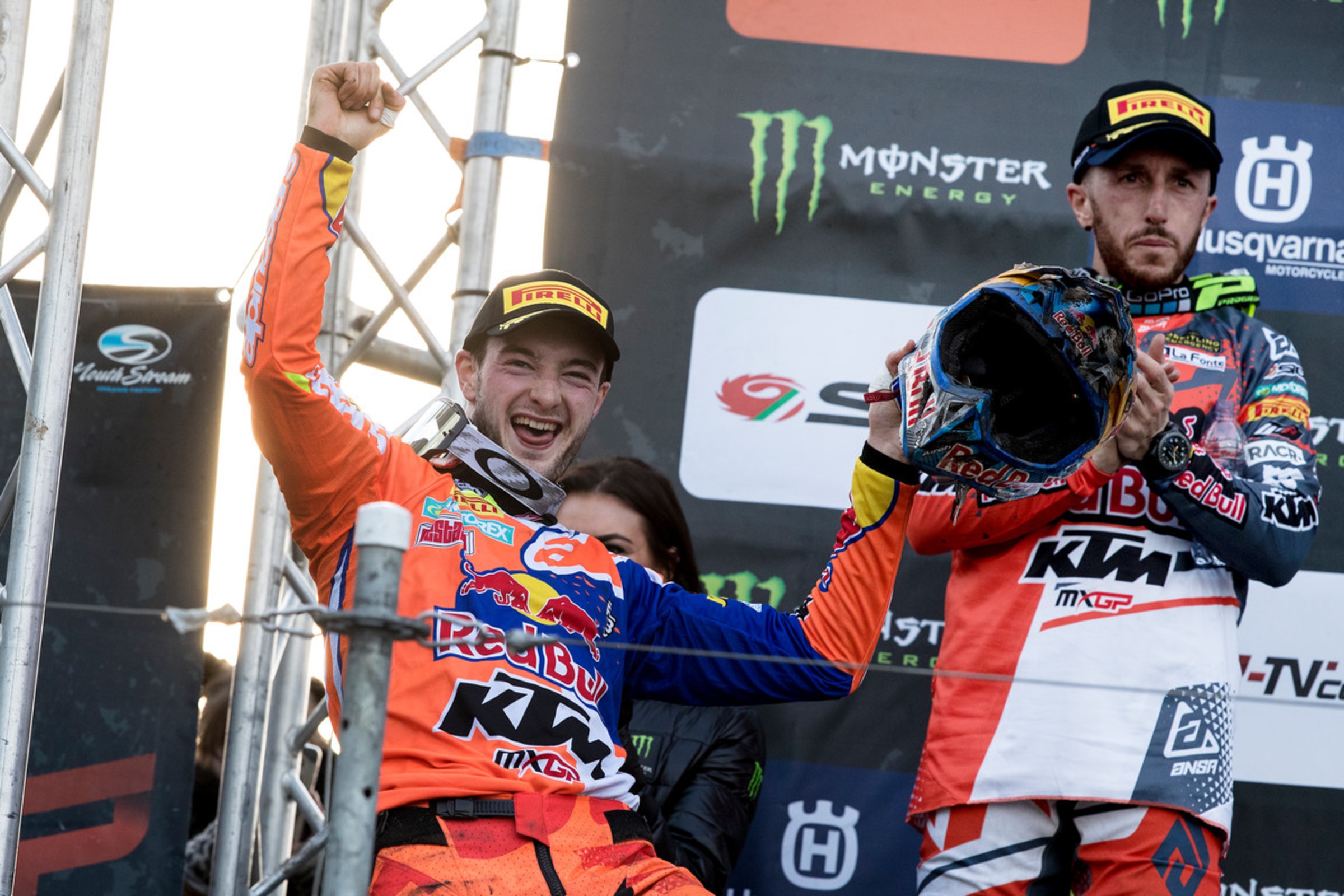 Redux 5 Thoughts on the MXoN

The validity of the Eli Tomac vs Jeffrey Herlings judgement has more holes than a lap of Lommel (it’s hard to prove much of anything in one race, let alone a team event) but there is little doubt that it is still one of the main draws this weekend. Tomac decimated the last US Grand Prix at Glen Helen in 2016 (as well as Charlotte the weekend before) and Herlings (1-1 that day in MX2 in California) ruled proceedings at Ironman last year, even taking time to make a cheeky tear-off rip as he passed Tomac who was circulating in championship mode. People might be wondering if Herlings has improved or become faster since then. The answer is an unequivocal yes. We’re talking about a rider who is riding at the peak of his game: starts, crushing speed, consistent intensity (that is unabated since his eighth 1-1 in a row at Imola last weekend) makes very few mistakes and the external factors such as terrain, temperatures, climate, or track layout doesn't seem to matter. Herlings will have the team dynamic to think about this weekend but he also knows if he brings 2, 3, or 4 points to the Dutch effort then his last job of 2018 is done. Don’t underestimate Jeffrey’s ambition to win both MXGP class motos however and through doing so enjoy watching a rider who currently knows no boundaries. His corner speed, blend with the 450 SX-F and the way he’ll attack jumps and ruts is something to behold. Watch, marvel, and then contemplate that he goes even faster in sand!

2. MX2 is the contest to watch

Aaron Plessinger and Jorge Prado will engage in their own 250 title-holder face-off. Prado has had a busy week of media commitments in his native country and could be battling fatigue for RedBud but the Spaniard is very much a “Roczen” (adaptive, creative with lines, incredibly smooth) in the making and will relish the choice across the RedBud bumps. In particular watch out for Prado’s starting technique. As mentioned in the MXGP coverage this year his holeshot tendency is stunningly good and he’s been first around the opening turn in over 50 percent of the 40 motos in 2018. This could be vital in the dash with the 450s. There is a gaggle of other talent to observe. GEICO Honda’s new recruit Hunter Lawrence is superbly technical (although it will be interesting to know exactly what bike set-up the Australian will have with the CRF250R), Honda HRC’s Calvin Vlaanderen is a strong addition to the Dutch team (even if the factory bike misbehaved and let him down at the last MXGP in Italy), Anthony Rodriguez, familiar to U.S. fans, will star for Venezuela on the Kemea Yamaha and teammate Ben Watson is debuting for the British after a fantastic season where he rose from 15th in the MX2 championship in 2017 to fourth this year.

Germany will again count on Henry Jacobi, who will be a top ten cert if he can keep focussed and has also surprised with his starts in 2018. Another treat will be Belgium’s Jago Geerts; the former junior world champion was the second teenage eye-catcher behind Prado and while his debut Grand Prix year was predictably inconsistent, that podium result at Kegums and near-misses in France and Belgium indicated that this kid has the goods. If Jacobi (Germany) or Geerts (Belgium) have good days at RedBud, when combined with teammates like Ken Roczen for the Germans and Clement Desalle for the Belgian, their teams chances improve massively.

The last time Ken Roczen appeared at the Motocross of Nations was in 2013 where he won the MX2 class for the fourth time and on German soil. A combination of team switches, timing and injury has kept arguably motocross’ most high-profile rider away from this showpiece event. This also means that Roczen will share track time again with some old rivals like Herlings, Van Horebeek, Paulin, and with a younger generation of riders that have looked up to the way that #94 drifted across the championships and series with ease and a with his trademark spirit of individualism. Roczen spent two and a half years in Grand Prix and migrated at the start of the decade when it was still the norm for young European stars to dream unabashedly of supercross and the life of riding and racing in America compared to the niche confines of their home continent.

Since Rattray, Roczen, Musquin, and athletes like Gareth Swanepoel there has not been the usual high profile departure from Grand Prix. Generally paddocks are narrowing in terms of opportunities, and this is a global motorsport issue rather than an indicator of one championship over another.

An international audience might not see the Roczen-of-old at RedBud or the KR that European race fans remember (yet) but it will be fascinating to see if the German’s usually perceptive take on the sport leads to a revised opinion of Grand Prix’s talent. Is the speed and capabilities of MXGP’s elite on show a step forward from his last dalliance with the group?

Dismiss Antonio Cairoli at your peril. Yes, the KTM man has been forced to accept a rare second position in 2018—not only in terms of results but also speed and psychology—and is still weathering the heavy impact to his right hip and back that caused him to miss his home GP at Imola last weekend but the adversity could instigate some magic from the #222. Cairoli has a weird relationship with the Nations. Glory in 2006, 2012, and 2013 sits alongside crashes and pain in 2005, 2011, and 2014. He even put both extremes together in 2009 with an electric performance to edge Chad Reed (’09s version of Tomac vs Herlings) in the first moto was followed by a spiralling crash in his second race. Success and pain seems to indicate that Tony revels in the one-day-one-hit nature showdown of the Nations. Arguably his strongest asset as a champion is the ability to react and produce results on a weekly basis; he crushes his rivals through a sustained high level of performance and has nine medals to prove it. On one day he could outclass everybody but his fitness following the nagging injuries is the biggest question mark.

Followers of the MXoN could be watching Britain’s Max Anstie. After all, the Rockstar Energy Husqvarna rider was the undoubted star of Matterley Basin. Anstie struggled with a concussion and then some sort of breakdown in an effective working relationship with his team in 2018 (he’ll be riding a Standing Construct KTM next year) so is unlikely to be the same figure that transitioned from a podium finish in the final Grand Prix of 2017 into the double moto sweep of the Nations (two wet and muddy fixtures). Anstie is another rider whose technical acumen will play to his advantage at RedBud. He is one of just seven riders to have captured more than one MXGP podium trophy in 2018 and while he may be frustratingly hot and cold in a championship campaign his potential to hit the heights in two motos means he is another to chart.

In my humble opinion Team USA have not looked more threatening and poised for success since 2011. If there is one trend with the host nation then it does involve an element of drama around at least one of their riders, and arguably the finger hovers towards another “new boy” in Aaron Plessinger. This competition has not been too kind to debutants that feel the pressure of the colours and the scrutiny of the largest media and fan interest they will have seen in their career.

Plessinger has the advantage of the comfort of his home crowd; an element that might have settled a young Ryan Villopoto at Budds Creek in 2007 or Trey Canard at Thunder Valley in 2010. He also has the experience of DeCoster, Tomac, and Barcia as to what to expect and when. Team USA cannot point to time zones, track variation, food, hotels or the sense of being in the lions den and this means this means the engravers should be ready with an acronym for the newest plaque on the Chamberlain Cup.

Their strongest Euro threat? France will badly miss Musquin and Febvre and although he is something of a talisman (and race winner all the way back in 2009) Gautier Paulin is exiting a tough period with the IceOne team and his competitiveness is a mystery. Team USA will have to watch orange. Herlings, Coldenhoff, and Vlaanderen have the form to finally win this thing for the Dutch after two successive years of near-misses. Coldenhoff has had a strong year on the Red Bull KTM and is a bright starter while Vlaanderen is part of a shiny MX2 cast list. The closest track to RedBud on the Grand Prix trail is probably Matterley Basin (even though the English course has a stony base and is more profound in elevation) and Vlaanderen was third at the British Grand Prix. On paper, the Dutch should provide the USA’s biggest battle to score the least points and collect the Chamberlain Trophy.

Get the Latest from Racer X