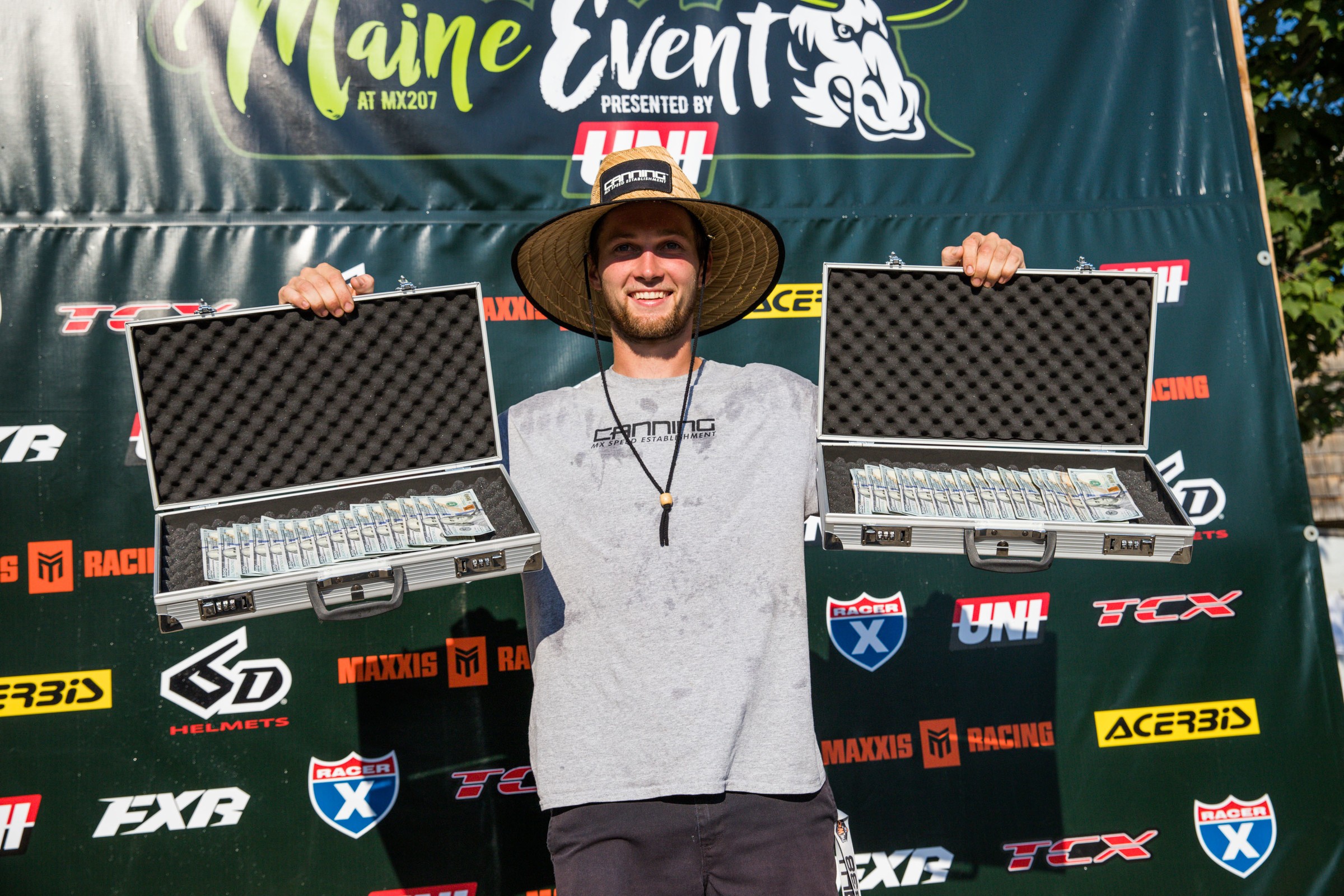 Between the Motos Privateer Power at the Racer X Maine Event

Chris Canning is the epitome of the moto life. He’s spent years living in his van, he races every weekend, and he trains riders—or himself—during the week. He could have taken a regular job and given up on the dream a few years ago, but the pull of racing is too strong, and Chris isn’t giving up.

Last year Chris won the 450 A Class at the Racer X Maine Event, and this year he doubled up by winning every moto in both 450 A and 250 A. The big purse money he earned, though, just went back into paying off old bikes he still had to make payments on. That’s the privateer life—living paycheck to paycheck—except in this case, it’s purse money to purse money.

We can’t think of a more deserving rider to get some cash rewards over the weekend. Enjoy this interview with one of the true grinders of the sport.

Racer X: So, you have the number one plate. A little bit different than last year. Don’t have any added pressure or anything like that.
Chris Canning: Yeah, it’s definitely a different feeling running out here for sure. It’s got some meaning behind it. You want to go out there and do your best. It’s definitely some pressure.

You did some nationals this summer?
Yeah. I did Muddy Creek and then I did Southwick and ‘Dilla.

Did that help you at all for this? Has that been helping you progress?
Yeah. I put a lot of time in training getting ready for that stuff. I raced every single weekend this year. I had one weekend off so far. So I think that just has a lot to do with it. I’m always ready to go for these gate drops. Just racing the local series. I did pretty good at Southwick and stuff, so that stuff helps, too.

I know everybody has noticed that your fitness has definitely been improving and improving. I know that has a lot to do with your training facility that you had. I know you’re training Canyon Richards, too. He won almost all of his motos today, except for one. How’s that going? How’s the training facility been?
It’s awesome. I wasn’t as hard on it this year just because I was training myself, mainly. I was slacking a little bit on the kids, but Canyon is someone I always go out of my way [for]. He lives down in [New] Jersey, so I head to his facility and I always try to have him ready. He’s a frontrunner at every amateur national he goes to. It’s definitely awesome. It lets me make a living involving myself with dirt bikes, so it’s definitely cool.

You talk about how you spent a lot of time training with yourself. Has starts been a part of that? Your starts have been pretty good.
Yeah. Starts I’ve always struggled for me. I’m on stock bikes, so it’s always tough. Rekluse gave me a clutch and Yoshimura hooks me up pretty good on pipes, so that’s about all I have done to my bike. So, starts have always been a struggle for me. I just hold it as long as I can into that first turn and hope for the best.

You mentioned a couple companies helping you out. Has your support gotten any better? Your stuff looks pretty legit.
Yeah, Powerband stepped up huge this year, and he gave me the cone valve forks with the track shock. Honestly, that was one of the biggest things that helped me out this year. I’ve always had basic revalve suspension, which always has worked good everywhere I’ve been, but going to the nationals, you need that next-level suspension. I think that has improved everything for me a lot.

So how was the event in general?
It was awesome. He [Danny Stuart] always brings in a lot of good dirt for that, and he preps it different than he does at every other race—you’d think most of the locals have an advantage, but they don’t because it’s different for this race. I like it because you have Rammy [Ramyller Alves] and guys from New Jersey and everywhere coming, so you have different guys coming to race, which makes it fun. They also have a Best Whip contest, and just a lot of fun stuff at the track. It’s building up and seems kind of like a Baja Brawl kind of deal now. It’s really fun, and it’s getting bigger.

How often do you race at MX207 throughout the year?
I race NESC, and this track is part of that series. So, it’s two to three times a year. For the Maine Event, it’s honestly totally different from what we normally race. It’s normally hard-pack and you use all outside berms there. The berms were not even a thing this weekend; there were no spots that were hard-pack…a lot of guys ran a paddle tire, to be honest. With the hard-pack, you have to use the berms because it’s slippery on the inside, but this weekend the track got rough and the lines changed.

Last year you won the 450 A class, but not the 250s. People on the side of the track were telling me you have stock bikes, and we know in the 250s, it’s hard to compete at the highest level without some engine work. So how did you improve this year?
I’m still on the same old stock bikes—I have pipes and Rekluse, still on bone stock bikes. My 450 has 90 hours and my 250 has 60; they run, though, and the KTMs are pretty fast. I feel good, though, and I’ve been training harder than ever.

How did you find more time to train this year? I’m sure you weren’t lazy in 2017.
I saved a little bit of money in the beginning of the year, so I was kind of able to slack off on training kids and trained myself a little better. I always trained myself good, but I had to take time away from that to train the other kids to make money. I focused more on myself this year, and I was able to have a really good year—and I think it will work out to get more kids because I’m riding better and winning more.

Seems to me like the New England area is the only region of the country that still has a strong, thriving local racing scene just like the eighties or nineties. Any idea why that is?
I think it’s because we don’t get to ride in the winter. Come the end of November, we start getting snow and we start riding snowmobiles or just hang out. Come springtime, we’re ready to rip. Also, we have fun stuff to ride, sand pits, fun races—it’s not just going to the same track every weekend and just burning laps all year long.

Okay, so for you—you’re racing locally and winning. But you also did a few nationals here and there. Which path do you really want to take?
I would love to do nationals full-time. I feel like that’s where I belong—I think I have the speed to run with the front group full-time. I think I showed that at Southwick. Everyone says it’s because it’s Southwick, and that’s the race closest to me, but those guys ride sand getting ready. The regular national guys know how to ride sand. The problem is, I don’t have any money—the nationals are so expensive. Before you even leave for the race, you’re $600 dollars into it, and then you have such a long drive to get to the race. I’ve found you can’t get away with working 40 hours a week at a regular job and then show up on the weekends; you can’t prepare yourself enough. This year I did three U.S. nationals and two in Canada, but I ran out of money! I was borrowing money! I planned on going to Budds Creek, but I didn’t have the money to get down there. So for me, if I stay local, I can make $600 bucks if I win, and if there are two races I can make $1,000 bucks for the weekend, and I don’t have the travel expenses.

What you need is a ride for the nationals.
Then I would be 100 percent in.

What about supercross?
Yeah, I would ride supercross for sure. The first year I got my [Road to Supercross] license, I broke my wrist in the first round of arenacross, then I went to Nebraska and got a ninth. I crashed in Louisiana in my heat and came up about a tire length short of making the main. So then I had to drive to Cali to get the one extra point I needed. I got that—I my points to go to St. Louis for supercross, but then two days before I left, I crashed in the whoops and blew my hand out. It comes down to money again—I only have two bikes. I spent a lot of my winter in Florida, and I couldn’t really afford to pay to ride at a supercross track, and on my 250 I would have to have supercross suspension, and then I couldn’t race locally because I would need to race motocross on that bike, and I was doing some local races in Florida, also. It’s just a gambling thing the whole way—it’s always been about money for me. I was going to do Daytona, but I had full moto suspension, and the track looked a little too tough to do with moto suspension!

The money here from the Maine Event purse has to be a big boost.
Yeah, I’m still paying for the Yamahas that I had. I have six bike payments, and I only have two bikes. A lot of guys think they live they lived the privateer life, but I lived in my van for three years and I’m still paying for bikes I don’t even own anymore. I had that money in the bank yesterday, and today I used it to pay off one of my Yamahas. Still have five bikes to pay for—I’m trying to put a plan together to get that done by the end of the year.

Have you ever had a regular job?
I owned my own landscaping company, then my friend ran it when I would leave to go to the nationals. I was actually a union laborer. I got in there, the job everyone wants—pay and benefits and all. I did it for six months and I was miserable! So I started doing the schools and the camps because I wanted to keep racing. The training and racing every weekend, that’s what I like to do. I love this sport and I want to find a way to keep going.

What you need is a ride, man.
Yeah. Someone give me a call!