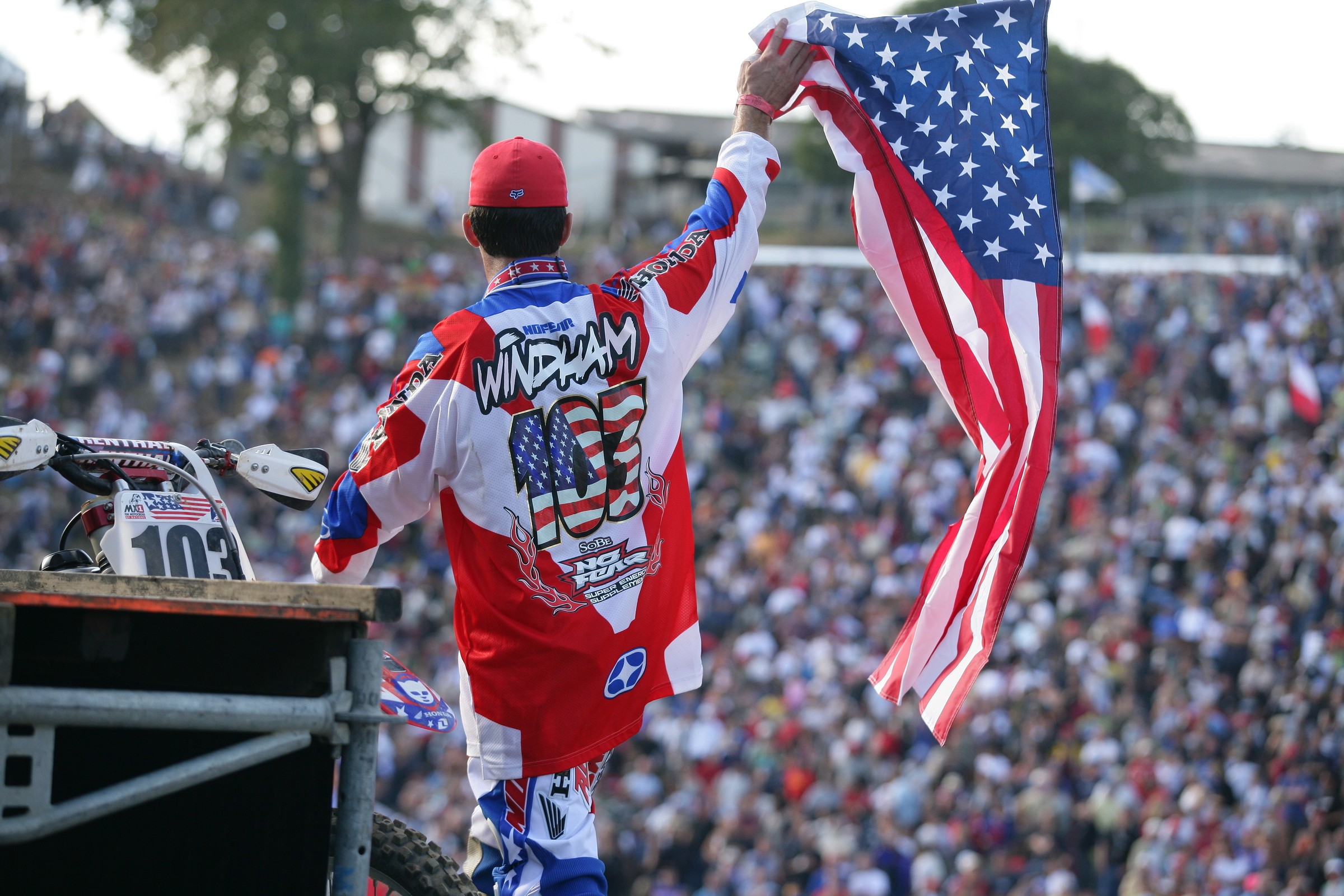 3 on 3 Matthes, Weigandt, and Thomas on Kevin Windham

After news broke that Ronnie Mac was being replaced on Team Puerto Rico by Kevin Windham at this year's Motocross of Nations, we reached out to three experts in the sport for their take on the lineup change and what to expect from the veteran riders on race day.

Jason Thomas: Now we are talking! Teaming up Travis Pastrana and Kevin Windham is not only fun, it also has a much more appropriate message for fans of all ages. I think the Ronnie Mac schtick is funny and I am friends with the real-life alter ego for Mr. Mac, but I just don’t think it was the perfect fit for an event this prestigious. Both Windham and Pastrana are MXoN alum and their names resonate worldwide. Sure, they are both retired and not in contention to do well at the event, but they have the names to raise money for Puerto Rico and create a fun atmosphere for everyone.

Windham was a member of the 1999 and 2005 Motocross of Nations teams (and would have been at Namur in 2001, but USA withdrew after 9/11). His 2005 ride to victory was a highlight, putting him forever onto the Chamberlain Trophy. Winning the Motocross of Nations is one of the highest honors in the sport of motocross, and one that should be mentioned time and time again as Windham arrives into Buchanan, Michigan.

As for how KW will do, I think we should all temper our expectations. He is several years past retirement and surely has no unrealistic goals. Having the likes of Pastrana and Windham in the A final sure would be fun, though. Riding well and being fast enough to qualify won’t be a problem. These two (along with Ryan Sipes) are some of the most talented riders to ever line up. The real question is, can they get into race shape between now and then? Having the fitness to run a competitive speed for 30 minutes is not something that can be found in a few days, but if they apply themselves, they should be able to get through Saturday pretty easily. Regardless of the result, a team with Kevin Windham and Travis Pastrana is one I can fully support. I think I would have to run some sort of USA-themed gear just because I am patriotic to a fault, but in the end, this is a win for everyone involved.

Steve Matthes: I'm just happy that JT will be a bit calmer now. I was fine with Ronnie (AKA Jimmy) racing the MXoN, but as long as he went under his own name and acted, well, normal. But I get some people weren't; it's not like I can sit here and call someone uptight because they think an "I Eat A**" sticker is inappropriate for a race like the MXoN.

Anyway, Windham is in, and that's real cool. From what I hear, there are zero plans to make the A main; these guys want to go out in the qualifying races on Saturday, have some fun, throw some whips, and entertain the fans. They might be the first team in MXoN history to decline an invite to the A final if they win the B main! How funny would that be?

Windham hasn't been riding much since he hung the boots up, but c'mon, man, it's Kevin Windham! He'll be fine, and people will love to see him back out on the track again. I just don't know why the team didn't go with someone like KW at the start and avoid all this BS that's been surrounding the team since it launched, if I'm honest. Anyway, cool deal, and looking forward to seeing Travis and Kevin back on the track again, even if it's all about just having fun.

Jason Weigandt:I was actually not offended by Ronnie Mac being on the team. I know he's loved by some and hated by others, but those are the exact feelings he's trying to produce, anyway. This is dirt bike racing, and I don't mind mixing in some fun and humor into it, especially when it's all done with a wink toward the hardcore fans. Why does Ronnie ride a 1998 aluminum-framed CR250R? Because the smart fans know it was one of the worst-handling motocross bikes of a generation—but the motor rips! When Ronnie talks about how awesome that bike is, it's really an inside joke for all of us. Sure, a fake character in a real race seems blasphemous, but that's why the MXoN has qualifying races on Saturday. If this team really is a joke, they'll be eliminated. These guys won't have an impact on the actual race results.

Also, for the RedBud Motocross of Nations, the hype is just as much the experience as it is the race results. I've heard countless stories of how big this celebration is going to be. Not all of the stories that emerge from this October weekend are going to be serious, or even related to the racing on the track. That's part of the appeal of this event, and to me, this crazy team just adds to it.

But while I personally would be okay with Ronnie competing, I get why many are not. They have a perfectly reasonable argument in that never before in the history of an event like this has a person raced under the name of a character. So, yeah, valid point. Also, again, Ronnie is definitely offensive to some. I get all of this, and you really can't muster up much of a counterargument.

If you're going to replace him with someone, Windham is an awesome choice, although I'm sure some are rankled that K-Dub's 450 ends the all-two-strokes party with this team. Still, Windham is one of the few who hits all the right buttons—he's cool, he's respected, and he hasn't raced in a long time, so just seeing him out there will be a sight. Does anyone not love Kevin Windham? Kudos to Travis Pastrana for cashing in a favor and getting it done. Would you rather have Kevin Windham at this race or not? Exactly.

The only trouble is that Mr. Mac might have completely eliminated himself from the event. Can he still be there as a team mascot of sorts? I think it would add a nice element to the event, but it seemed like he was intent on really racing, so he might not be pumped to stand on the sidelines and cheer—especially cheering a dude on a two-stroke.

Wait, now I'm talking about Ronnie Mac's thoughts and intentions in much too serious of a manner. I might have just jumped the shark… or maybe Ronnie has? Travis Pastrana probably has really jumped a shark in real life.

I don't know where I'm at with all of this besides one thing: I want this RedBud event to be the once-in-a-lifetime experience it's supposed to be. As long as we all have some fun, I'm down with anything.