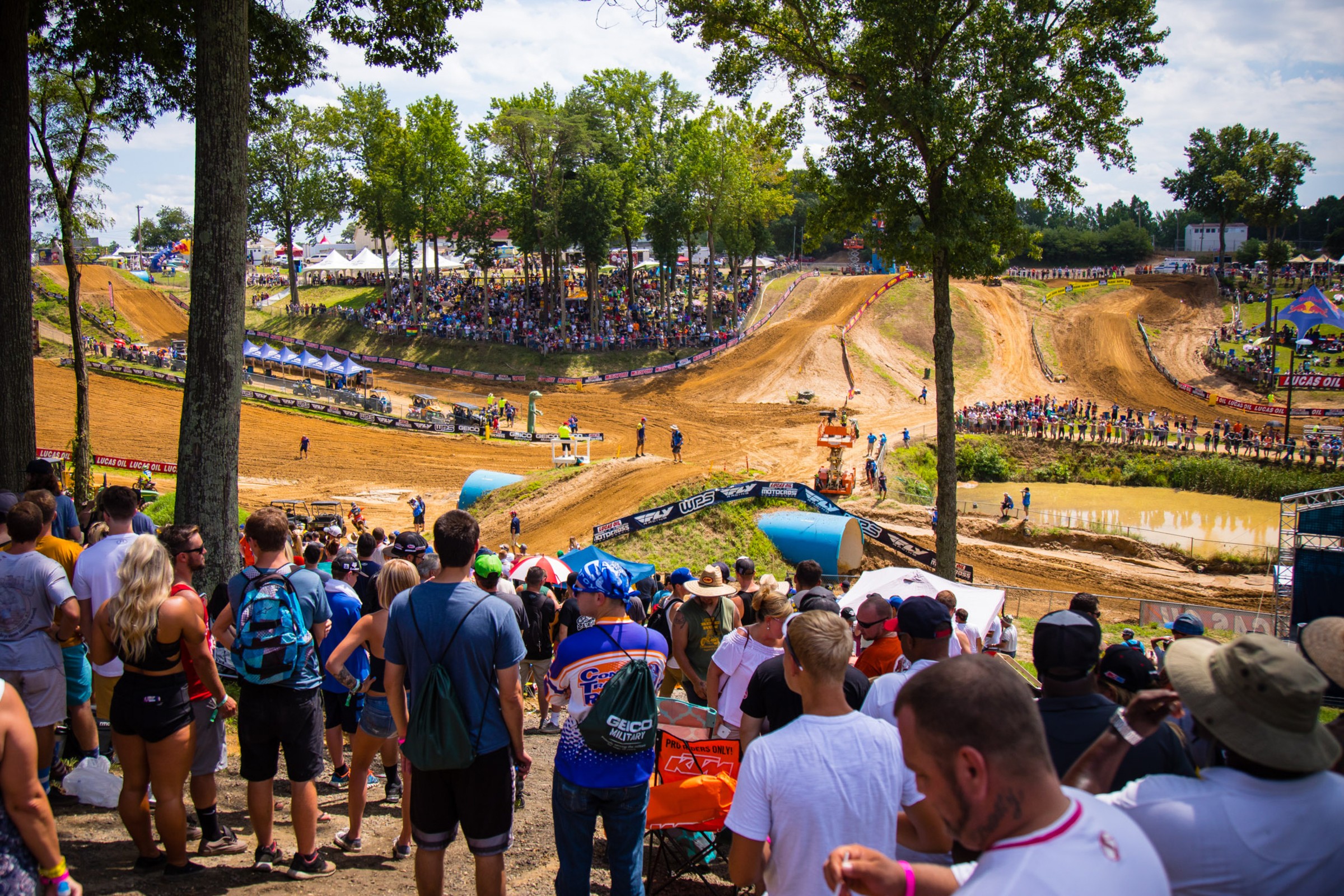 Ah, Budds Creek. My favorite track of the year, it was also site of my best finish back in 2006. It’s funny how those two coincide, but there are reasons. Mostly, this dirt was nearly identical to the dirt I practiced on daily in Florida. The clay/sand mix even had the same color of what I rode on most days. The consistency of the dirt gave me expert-level predictability for how lines would hold up, where traction would be and not be, and, of course, the extra confidence to excel.

Looking back over the years, riders like Tim Ferry (moto win in 2003), Matt Goerke, Kyle Chisholm, James Stewart, Ricky Carmichael, Chad Reed, Malcolm Stewart (moto podium), and more all had better-than-usual results at Budds Creek (okay, Stew and RC are unfair, but you get the point). I think for everyone else, though, it’s generally a well-liked track. I can’t imagine anyone disliking this track which is uncommon for the series.

The start at Budds Creek is a difficult one. Dating back to the Motocross of Nations in 2007, the start was situated in a way that the inside gates are incredibly favored. It’s next to impossible for a great start to come from the far outside. I personally don’t care for this thought process, but it’s just something everyone has to deal with. Qualifying times are much more important than some other rounds, so look for everyone to be putting it on the line Saturday morning.

There aren’t any huge jumps on this track, but that doesn’t mean it’s not challenging. The off-cambers are critical to execute efficiently, especially in the early laps when everyone is bunched together. There are almost always crashes on the first lap, so look for chaos in the backdrop of the television coverage. Getting a good start and being able to rail through these cluttered sections on the first lap is a huge part of the results puzzle. If you happen to see the gap between the lead and the rear of the pack on the first lap, you’ll see what I am referring to. Those slow sections up in the trees are torture for a contender with a bad start.

Another factor for Budds Creek can be sweltering heat. With its proximity to the Atlantic Ocean and with the race now landing in mid-August, humidity can wreak havoc on the field. We have seen riders overheat badly here, most notably Ivan Tedesco a few years ago. He was so hot and out of sorts, he ended up riding parts of the track with no helmet on. That’s what heat can do. Having been dizzy enough to consider pulling off myself (Millville 2003 and Southwick 2005), it’s always in the back of your mind when temps soar.

How awkward is the rider lounge in the Monster Energy Yamaha semi?

Can Aaron Plessinger clinch the title in the first moto?

Can Ken Roczen bounce back after a tough Unadilla?

Can Austin Forkner turn this ship around?

Will Joey Savatgy find an overall win before we wrap this series?

How will Jason Anderson file into the top 450 tier?

Marvin Musquin responded to his MXoN snubbing by grabbing the 450 overall at Unadilla.

Dylan Ferrandis grabbed his second overall of the series, putting up an impressive 1-1.

Mitchell Harrison used the adverse conditions to his advantage. His overall podium had to help his chances of a 2019 home.

“Filthy” Phil Nicoletti landed on the podium in front of his family and friends. Doing well is one thing, but doing well in front of those who have been around for the journey is another altogether.

Aaron Plessinger put up another good finish and is in prime position to win his first outdoor title.

Austin Forkner just can’t get anything to go his way. Budds Creek is similar to what he rides on regularly, so I am looking for a good day out of the #35.

Enzo Lopes had a bike malfunction (assuming water-related) and wasn’t able to race the second moto at Unadilla.

Alex Martin had another so-so day and will most likely watch this 250 title slip away. Second in the series is nothing to sneeze at, but I am sure he is a little bummed how this series wound down.

Alex Martin gets back on the podium after a rough spell and Matthes starts ranting about a Troll Train again.

Budds Creek is Weston Peick’s last race of the season.

Cooper Webb puts in his best overall finish of the season.