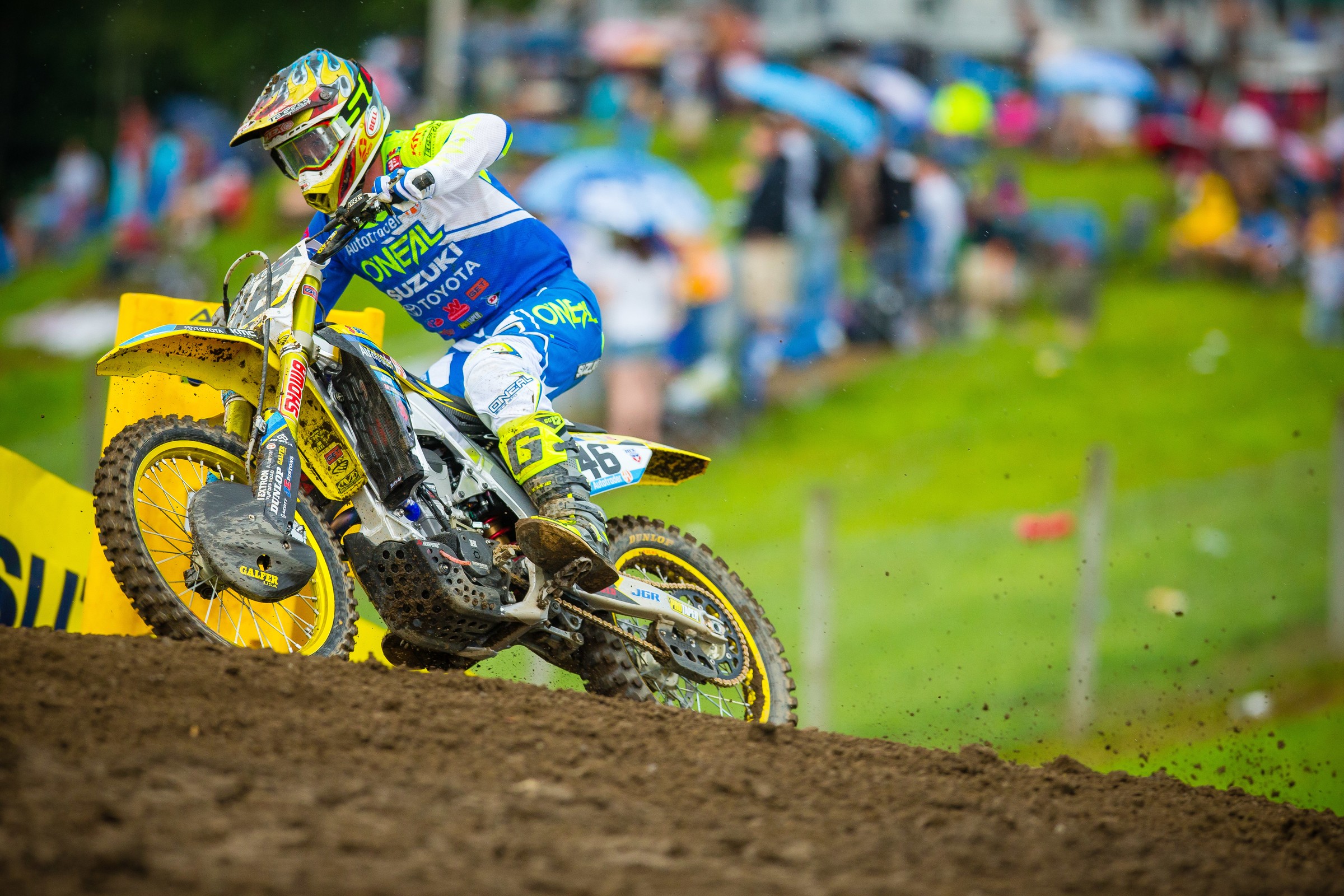 Comment: Anderson will make his return to racing at Budds Creek after being sidelined early in the season with an injured foot.

Comment: Chisholm injured his knee at High Point. The injury required surgery, and Chisholm will miss the rest of the season.

Comment: Craig tore his ACL at Glen Helen and is out for the season. Last week, Craig got a plate and screws removed from his hand (2017) and his tib rod (2016) taken out from previous injuries.

Comment: Enticknap made his return to racing at Washougal, but he will miss the rest of the season after breaking his femur while practicing at Fox Raceway (formerly Pala Raceway).

Comment: Grant made his return to racing at Washougal, but after taking tenth in the first moto, he opted out of the second. He missed Unadilla and will miss Budds Creek as well. There’s a chance he’ll be back for the finale at Ironman Raceway.

Comment: Hill hit a tree at Washougal in the second 450 moto and sustained a left knee injury. He’s opted to sit out Budds Creek to try to be 100 percent at Ironman.

After receiving advice from my doctors, the @jgrmx team and I have made the decision to sit out Buddcreeks so that I may attempt to be 100% for Iron Man. Nagging injuries are never fun. This extra time off will surely help me return healthy for the remainder of racing as well as the off season development for 2019! Cheers everyone!

Comment: Mosiman dislocated his shoulder at Glen Helen and is out for the remainder of the nationals.

Kailub Russell — Banged Up | OUT

Comment: The five-time GNCC Champion made his Pro Motocross debut (in the motos) last weekend at Unadilla. Russell finished sixth in the first moto, but ran into Justin Barcia early in moto two. He then crashed again later and did not finish. Kailub said the injury is not that serious, and if he had to race a GNCC this weekend, he'd on the starting line. Because he's relatively new to the motocross game, he only wants to race if he has the proper preparation. He’s out for Budds Creek and Ironman.

Comment: Seely broke his pelvis and two vertebrae during supercross and will not race any nationals. He hopes to return to riding soon.

Comment: Tapia broke his pelvis and a pair of vertebrae in Indianapolis. He’s out for the season.

Comment: Tedder had surgery to repair a nagging wrist issue that was reducing grip strength. He’d hoped to be back for a few races at the end of the season, but his recovery is taking longer than expected. He’s out for the season.

Comment: Wilson is out for the nationals after having surgery to repair a torn ACL. He’s been spending his off-time rehabbing and rescuing kittens.

Comment: Bisceglia is out for the season after breaking his ankle and fibula while preparing to return to the nationals.

Comment: Cianciarulo is out for the season after having surgery to fix a torn ACL. He told us earlier this week he hopes to be back on the bike in September.

Comment: Davalos is recovering from a herniated disc and from surgery to repair a fractured C7 vertebrae. He’s out for the season.

Comment: Decotis missed Unadilla due to illness and weakness from Lyme disease. He’ll be back for Budds Creek.

It’s amazing what a little rest and recovery will do for ya. Thanks @jbonejgr and everyone @jgrmx for keeping me positive during a tough outdoor campaign. Ready to get back out there for the last 2 rounds of @promotocross. Couple of smiles a few mule kicks and we should be good. ?? Also a big shoutout to @askdrking for all the guidance and getting my energy levels back to normal. See everyone at Budds Creek @fxrracing @suzukicycles @araiamericas

Comment: Hartranft will miss the rest of the nationals after dislocating his shoulder before Southwick.

Comment: Marchbanks crashed hard at RedBud and underwent ankle surgery. He’s out for the season.

Comment: Oldenburg tore his ACL while practicing and is out for the season. Last week, Monster Energy/Yamalube/Star Racing Yamaha assistant manager Wil Hahn told us Oldenburg is healing up great and expects to be back on the bike soon.

Comment: Osborne sustained a torn labrum at Thunder Valley and underwent surgery to repair it. He’s out for the season.

Comment: Peters is out for the season after having surgery to repair a torn ACL suffered in supercross. Peters said this week he’s hoping to be back on the bike soon.