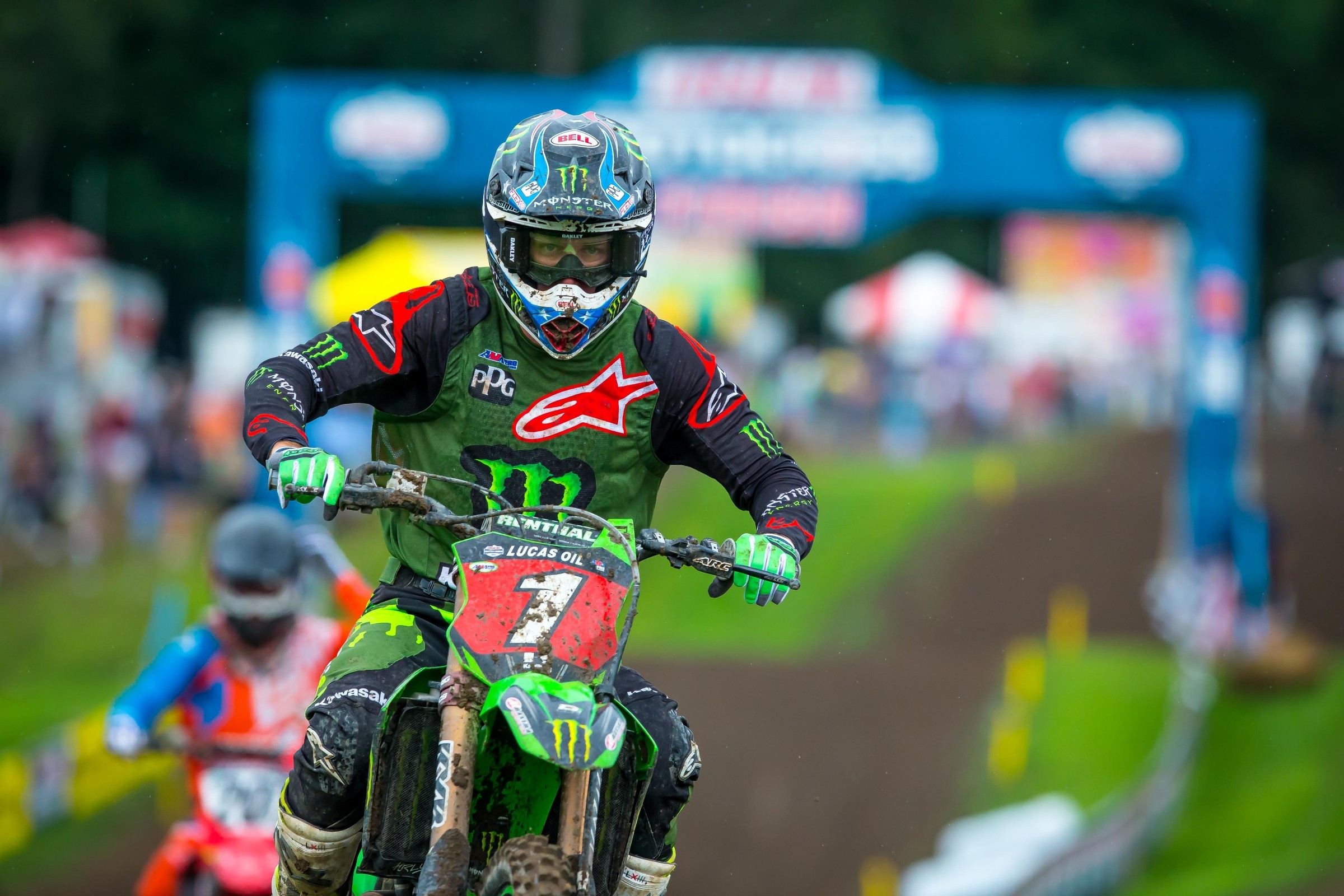 In the 250 ranks, Alex Martin and championship leader Aaron Plessinger are the only two racers still in championship contention—everyone else has been mathematically eliminated. And, given Plessinger’s 78-point lead over Martin, there’s a pretty good chance Plessinger will wrap things up at Budds Creek. He could even do it in the first moto if he doesn’t give up more than three points to Martin, which, considering how things have been shaking out lately, could easily happen. Whether he does it in the first moto or the second, expect Plessinger to lock up the 250 National Championship this weekend. —Aaron Hansel

Considering how dominant Eli Tomac has been this summer, the points situation in the 450 Class is still surprisingly tight. There are four riders left in it, although Justin Barcia and Ken Roczen will likely be eliminated at Budds Creek, but the real battle is between second-place Marvin Musquin and championship leader Tomac. With four motos remaining, Musquin trails Tomac by 15 points, which means Tomac has almost no room for error, be it human or mechanical. Same goes for Musquin—if he has a disastrous day and gives up 35 or more points to Tomac at Budds Creek, it’ll all be over. —Hansel

Know whose results from Unadilla don’t reflect how good he rode? Michael Mosiman, that’s who. The Rockstar Energy Husqvarna Factory Racing rider holeshot the first moto and had a spectacular ride going before going down all by himself over a jump in the slick mud. Even so, he managed to salvage sixth, but his shot at a great overall finish evaporated when he went down in the first turn and was forced to come from way, way back for 13th. We’ll see if he can use Budds Creek to get back what he should have had at Unadilla. —Hansel

The mud at Unadilla made for some pretty entertaining racing, and when teammates Cooper Webb and Justin Barcia found themselves battling in the second moto, the action got even more engaging. Webb went wide in a left-hander, which Barcia took offense to, and he let Webb know it over an ensuing jump with an, ahem, “friendly” gesture. They both seemed like they were fine with it in their TV interviews afterward, but that doesn’t erase the fact that Barcia was angry enough to flip his teammate off during the moto. Don’t expect a dust-up at Budds Creek, but you might want to have the popcorn ready just in case the two find each other out there. —Hansel

It’s fitting that “Filthy” Phil Nicoletti got his first career podium at Unadilla. Nicoletti is from New York, which means he got to notch a big career first in front of his hometown fans, and the rain and mud literally made Unadilla the filthiest race of the season! The fact that Nicoletti joined the Rockstar Energy Husqvarna Factory Racing squad just a few races ago makes this feel-good result even better. We’ll see if Nicoletti, the angriest man in racing, can generate some more happy feelings at Budds Creek. —Hansel

Yesterday was a dream come true! Finally a 450 podium OVERALL!! Damnnn it has been a long journey. To do it at Unadilla, in front of family and friends was surreal. No matter how long it had taken, I’m glad it was accomplished there. Thank you to every local northeast fan, for cheering all day rain or shine and chanting FILTHY on the podium! You truly are badass!! Thank you @rockstarhusky and each individual/team sponsor for helping me check this off the bucket list!! #truenewyorker ? @shepherdphotos

The Champ Is Back

Reigning Monster Energy Supercross Champion Jason Anderson will return to racing Saturday at Budds Creek. Team manager Bobby Hewitt told us earlier this week that Anderson will attempt qualifying, and a final decision will be made on racing the motos. “Racing Budds Creek is 95 percent, but the final decision will be made after timed qualifying. For racing Indiana [next weekend], we are 100 percent," Hewitt told us. Anderson has been sidelined since round two due to a foot injury sustained during a practice session at Glen Helen. Anderson went 4-6-4-2 at the opening two rounds; we’ll see how he does in his return. —Chase Stallo

Troy Lee Designs/Red Bull KTM’s Mitchell Falk will make his pro debut this weekend in the 250 Class. Falk, a native of California, finished fourth in the Open Pro Sport class at Loretta’s this year and won a 250 B Limited title there in 2016. It’s never easy for a rookie to jump in at the end of the year, but Saturday will be more about getting acclimated to the pro ranks rather than putting in results. —Stallo

Since returning from injury at High Point, Dylan Ferrandis has been one of the best riders in the 250 Class. He has four moto wins since High Point (only Aaron Plessinger has more moto wins during that span) and three moto podium finishes. Ferrandis captured his first 1-1 of the season last weekend in the slop at Unadilla, outlasting his teammate Plessinger. Ferrandis sustained an injury at Budds Creek last year, so we’ll see if he can exact some revenge this weekend and take his third overall of the season. —Stallo

Mitchell Harrison is still looking for a ride for the 2019 season, so his first career overall podium finish last weekend couldn’t have come at a better time. Harrison led laps in the second moto—before colliding with a lapper—last weekend before taking a fourth in the moto and third overall on the day. If he wants to lock up a ride for next year, another podium performance would go a long way. —Stallo

Ken Roczen had an awful day in the mud last weekend. “I didn’t get a start and people crash in front of you. You can’t see. I haven’t ridden these conditions probably—we didn’t have a mud race in 2016, I don’t think,” he told Steve Matthes after the race. Prior to Unadilla, Roczen was on fire, going 1-3-2-3-3-2 over the last three rounds. We’ll see if he can get back on track this weekend. —Stallo