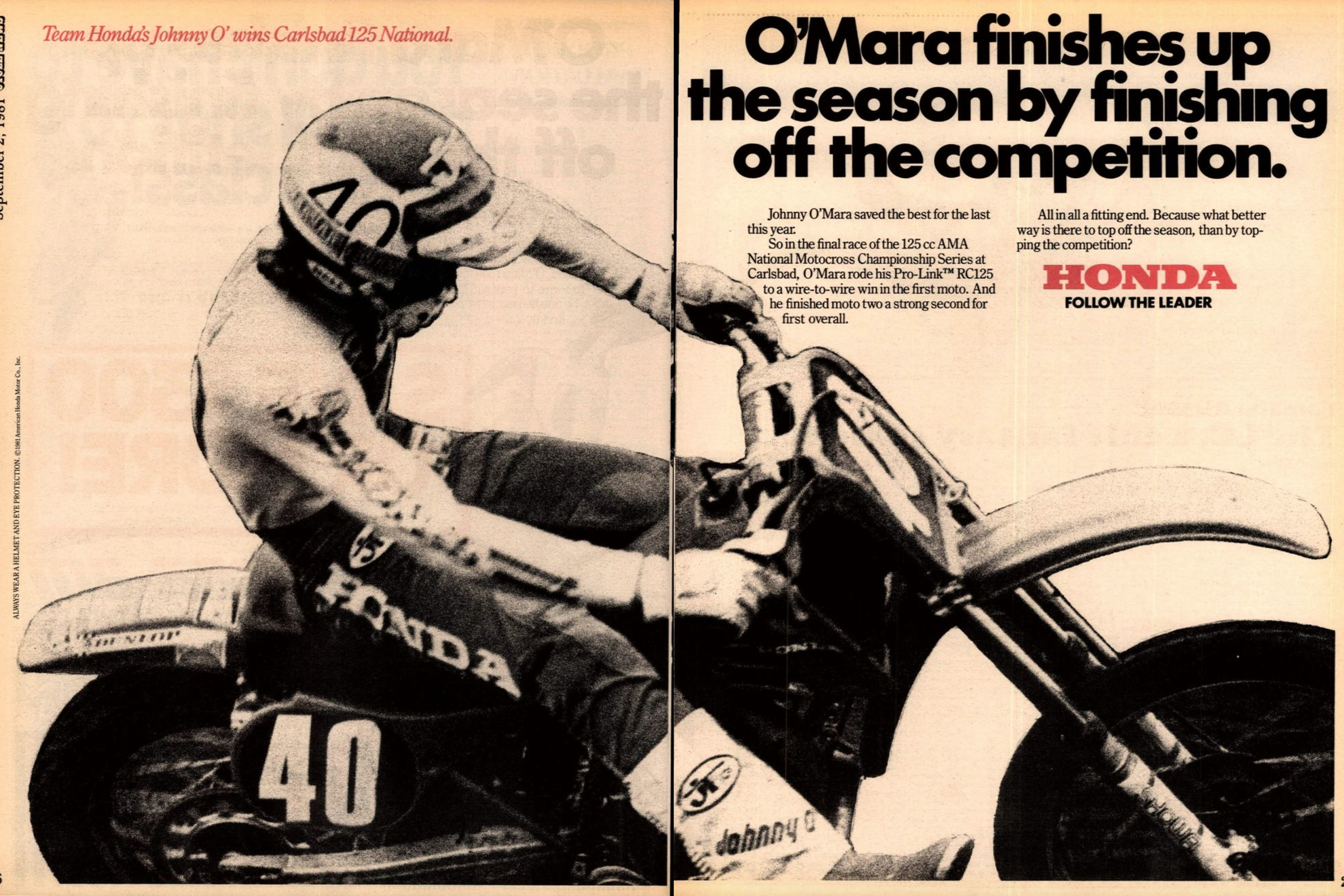 On This Day in Moto August 16

The AMA National Motocross Championship ended at Carlsbad Raceway in Southern California with a Broc Glover win in the 500 Class. The Yamaha rider, who would lay claim to the series title as well, went 1-1 aboard his big-bore Yamaha. Suzuki's Marty Smith finished second in what would turn out to be his last AMA National race. Yamaha's Mike Bell was third, with future FIM 250cc Motocross World Champion Danny LaPorte fourth aboard a Honda.

In the 125 Class, Honda's Johnny O'Mara took the overall win, but Yamaha's 16-year-old rookie Rick Johnson won a moto aboard a YZ125 and would finish second overall.

Missing from the race was Suzuki's Mark Barnett, who had claimed the 125 National title and every round of the series to that point. In fact, Barnett had claimed all 14 motos and was one race away from a perfect season. Unfortunately, the Bomber was a no-go after snapping his collarbone.

In Ponca City, Oklahoma, the NMA Grand Nationals were winding down, and the "soft" debut of Kawasaki Team Green had gone well. The revolutionary amateur support program was supporting select riders, including Billy Liles, Kyle Lewis, Larry Ward, and Willie Surratt, all of whom won classes.

The last standalone 125cc U.S. Grand Prix was run at Steel City Raceway in Delmont, Pennsylvania, and Team Suzuki's Erik Kehoe took the overall win. Kehoe lost the first moto to Honda's Micky Dymond, but won the second 40-minutes-plus-two-laps moto to take the overall. The whole event was overshadowed to some extent by the disqualification of superstar Ron Lechien of Team Kawasaki after he slept in on Saturday and missed the mandatory tech inspection.

The 500cc Support class was won by Team Honda's Rick Johnson, one week after he clinched the 1987 AMA 500cc National Championship.

The AMA Amateur National Motocross Championship at Loretta Lynn's was up and running, and among the big winners were Kawasaki Team Green's Brian Swink, Steve Childress, and Jeff "Chicken" Matiasevich, each of whom won two classes.

The penultimate round of the 2014 Lucas Oil Pro Motocross Championship visited Iroman Raceway in Crawfordsville, Indiana, for the first time in series history. Unfortunately, the weather did not cooperate and rain turned the inaugural event into a mudder. Ken Roczen won the first moto and took second in moto two to take the overall over Trey Canard, who went 3-1. Ryan Dungey took third overall with 2-9 motos.

Marvin Musquin captured the 250 Class overall with 3-1 scores, with Joey Savatgy and Jessy Nelson rounding out the podium. The story of the day, though, was Jeremy Martin, who clinched his first career 250 AMA Motocross Championship with second place in the first moto.