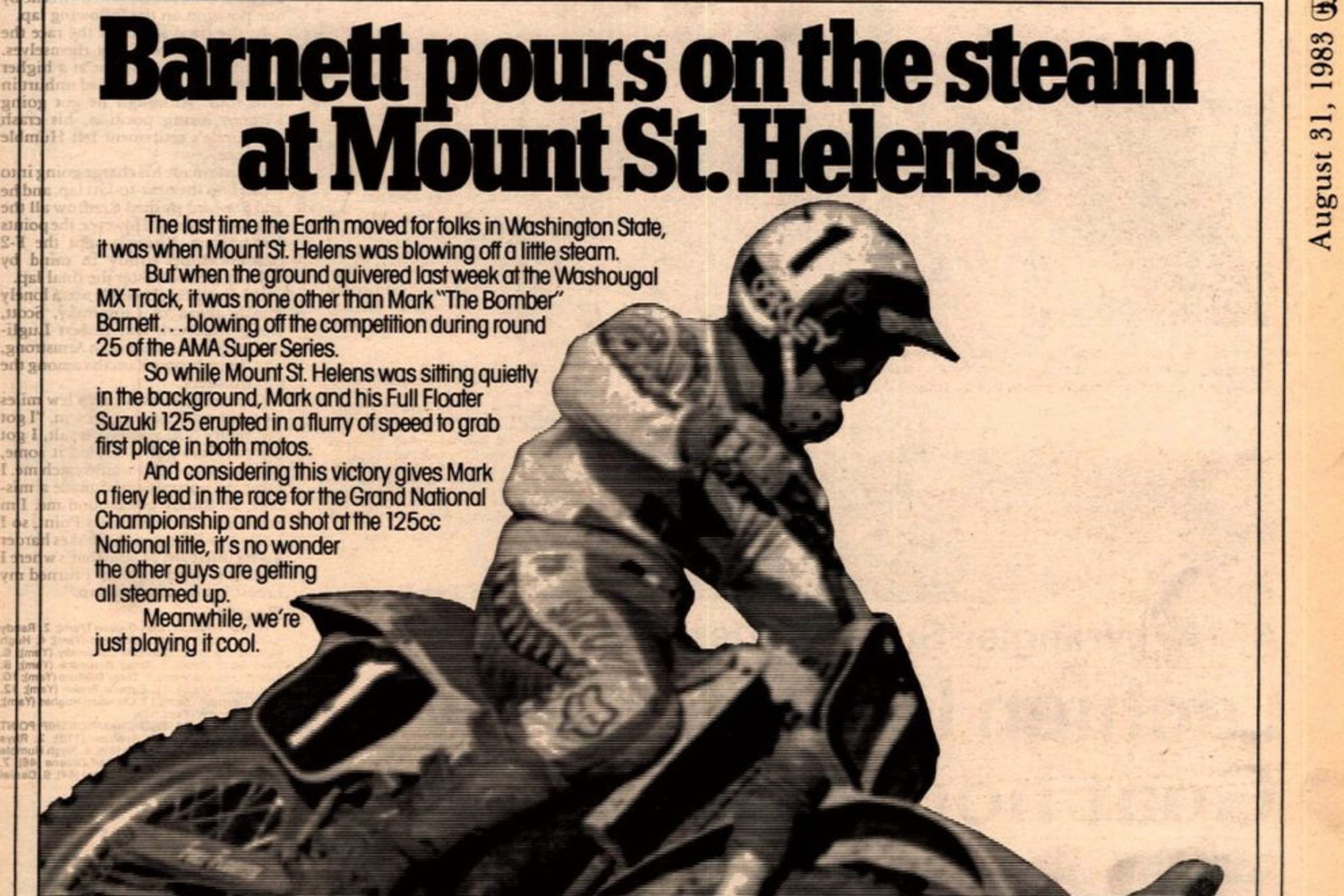 On This Day in Moto August 14

In one of the most controversial days in the history of motocross, Yamaha's Bob Hannah was ordered to pull over late in the second moto of the San Antonio 125 National, the last round of the '77 AMA 125 National Motocross Championship, as his mechanic Keith McCarty put out the infamous "Let Brock Bye" chalkboard. The move allowed Glover to win the moto and overall. More importantly, it allowed Glover to reach 240 total points, tying him with third-place Danny LaPorte of Team Suzuki in the final points tally. And based on having the most wins in the series, as well as the last win, the title went to Glover. In the years to follow, Glover would earn five more AMA National Championships, and his tally of six would stand as the record for outdoor titles until Ricky Carmichael came along. Hannah would also win multiple titles, and LaPorte would later win an AMA 500 National Championship and the FIM 250cc Motocross World Championship. Every name in this paragraph is a member of the AMA Motorcycle Hall of Fame.

Washougal hosted a 125/250/500 National triple-header. Three-time AMA 125 National Champion Mark Barnett won the 125 Class, the last national win of his own AMA Motorcycle Hall of Fame career. All told, the Bomber won 25 AMA 125 Nationals, which stood as the record until Ricky Carmichael broke it in 2001. The record has since gone to James Stewart with 28.

The 250 Class was won by Yamaha's Rick Johnson over Suzuki rider Scott Burnworth and Honda's David Bailey, who would ultimately win the '83 title. And in the 500 Class, Yamaha's Broc Glover, also on his way to the series title, took the win. Kawasaki's Kent Howerton was second and Suzuki's Alan King finished third.

And Thorlief Hansen, a Swedish rider who retired in 1978, had been doing endurance and suspension testing for Team Yamaha when he decided to enter the 1983 Swedish 250cc Grand Prix as a wild card. Hansen promptly went 2-1 to shock the GP regulars on a Yamaha YZ250. German Honda rider Rolf Deiffenbach finished second overall.

The Spring Creek 125 National in Millville, Minnesota, was won by local hero Donny Schmit of Team Suzuki, who went 1-1 on his RM125. However, the '88 AMA 125 National Championship was clinched by Team Honda's George Holland, who went 3-6 to finish third overall behind Schmit and runner-up Guy Cooper. And finishing fourth in one of the best AMA National debuts ever was 16-year-old Damon Bradshaw, who went directly from Loretta Lynn's Ranch to Spring Creek to tip his toe in the professional waters. Bradshaw finished 5-4 in the motos.

Down in Argentina at the 250cc Grand Prix, it was Italian Honda rider Giuseppe Andreani who took the overall win with 1-4 scores to edge the 2-3 of visiting American Rick Ryan, also on a Honda.

And in Finland, Holland's Dave Strijbos opened a seven-point lead on French teenager Jean-Michel Bayle in their battle for the 125cc FIM Motocross World Championship. Strijbos, riding an Italian-made Cagiva, went 3-1 to outpoint Bayle's 2-3 and third-place Mike Healey's 4-2. The championship would be decided two weeks later in Switzerland, but not in Strijbos' favor.

And in this week's Cycle News (August 14, 1988), Kawasaki Team Green's Mike Brown appeared on the back cover for his title win at Loretta Lynn's—yes, young Mike Brown won the 125 B Modified title 30 years ago!

At Washougal, Kawasaki's Mike LaRocco and Honda's Jeremy McGrath traded 250cc moto wins, with The Rock getting the overall by having a better moto the second time out. In the 125 Class, Splitfire/Pro Circuit Kawasaki's Ryan Hughes bettered Suzuki's Damon Huffman and Honda's Doug Henry, who was the series points leader.

Here's a cool home movie of it:

And finally, happy birthday to one of the all-time great characters of American motocross, "Jammin'" Jimmy Weinert.