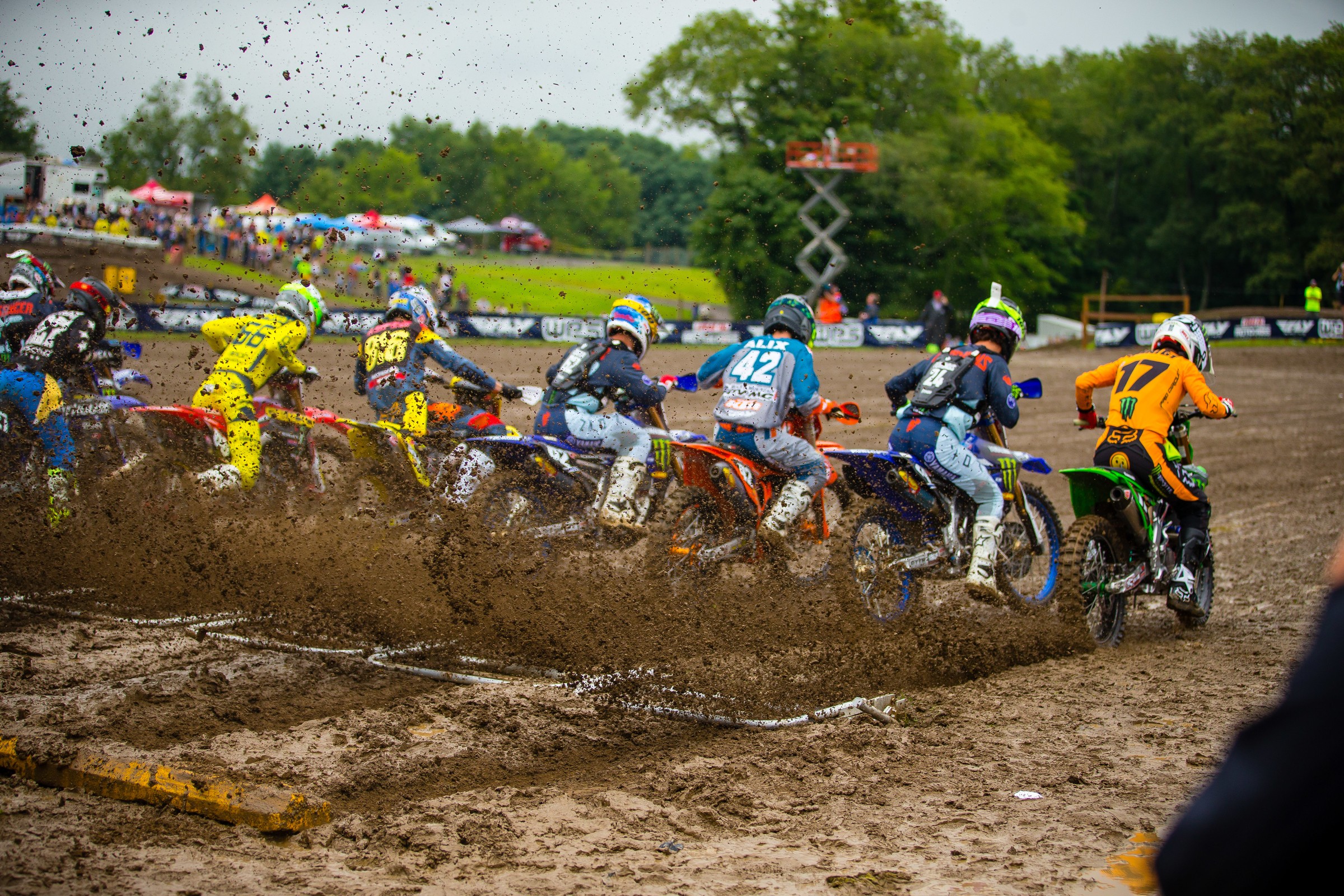 Straight moto wins for Eli Tomac until his streak was broken by Marvin Musquin in the second 450 moto.

Motos in the last 14 that Marvin Musquin has finished outside the top three. He finished fifth and fourth in those two motos.

Finishes for Phil Nicoletti at Unadilla. The native New Yorker finished third overall for his first career overall podium in the 450 Class.

Position Justin Barcia was in after lap one in the first 450 moto. He crashed in the first turn, then came back to finish eighth.

Position Benny Bloss was in after lap one in the first 450 moto. He came back to finish tenth.

Finishing position in the second 450 moto by Stank Dog (Gared Steinke) on a 250 two-stroke.

Points scored in six motos prior to Unadilla by privateer Jeremy Hand. Hand went 11-13 in the 450 Class Saturday and scored 18 points. He moved from 49th in points to 33rd.

Finishing position in the second 450 moto by Cooper Webb. It’s the first top-five moto finish from Webb since he returned from injury at Southwick.

Finishing position by Webb’s teammate Justin Barcia in the second moto. It was Barcia’s first moto podium since moto two at RedBud.

Finishes by Toshiki Tomita in the 450 Class. It’s the first time in his career that the Japanese rider has finished inside the top ten.

Laps led by Mosiman (moto one) and McAdoo (moto two). It was the first time leading laps in their careers.

Finishing position by McAdoo in the second moto. It’s the first time in his career he’s scored a top five.

Pairs of goggles worn by Dylan Ferrandis in the first 250 moto. He rode a few laps with the first set, tossed them, and then still had clear vision with the goggles underneath.

“I haven't raced a mud race in a long time, so the plan was to just go out there and have some fun. It was definitely on the more challenging side when it comes to conditions. In the first moto I had to come in for new goggles, and then I went down twice and could only get up to seventh. The first few turns of the second moto were pretty crazy. I didn't even make it to the finish line [to end lap one], and there was a dirt clod on my goggles. I tried to pull a roll-off but it broke, so I had to come in again and get another set of goggles. From there, I just tried to make my way up the field. It took a long time until I had a clear track, and once I did, I dropped my lap time and could kind of get into a flow. I feel like if I would’ve had better starts today and been up front, the day could’ve been a lot better. As it is, I’m really disappointed because normally mud is really good for me and I like it.”

“Unadilla this week reminded me of the second moto at Unadilla last year, where we got a ton of rain and it was very challenging. I tried my best and got out of there pretty happy, considering that I don’t have a lot of experience in those types of conditions. I’m sixth in the points standings and I like Budds Creek, so I’m excited to do the press day and get more track time in.”

“It was a good but chaotic one today, to say the least. I pulled the holeshot in the first moto, led a few laps, then went down after cross-rutting. The bike was so heavy after that, then I crashed twice after going down the first time. I ended up sixth. I started in the same gate the next moto and was really close to the holeshot, but I was clipped and went into the hay bales. I got back to 13th, which is good. It was a fun race and I enjoyed my experience."

“Unadilla was a huge step in the right direction for us. In moto one, I was running around seventh in the mud until I ended up in the banners with a post jammed into my rear wheel. When I tried to pull on the bike, it really hurt something in my back. It was so bad my mechanic had to help lift me off of the bike at the end of the race. I pinched a nerve, and the team was telling me I didn’t have to go out there and risk it in the second moto, but I decided to give it a shot. Big thanks to the Alpinestars medics for their help.

"We rebounded in the second moto, pulled the holeshot and led to about halfway and ended up fifth. The track got really rutted and gnarly by the end of the day—the first few laps were so tough because no one did a sight lap, so you had no idea where the lines were going. I think I had about 15 or 20 minutes in me before the adrenaline wore off, then I started feeling it again with the pinched nerve. Happy to hang on for fifth. We now know that we can run up front and plan to do just that these last two rounds.”

Hill entered the weekend with a knee injury sustained at Washougal when he hit a tree, and the mud certainly didn’t help. According to Hill, he injured his knee in a rut in the first moto and decided to sit out moto two. He hopes to race Budds Creek this weekend.

“I felt good in qualifying. Unfortunately, I caught my previously injured leg in a rut in the first moto and that was it,” he said in a team statement. “I had to sit out the rest of the day. My goal is to work hard this week to get the swelling out of my knee and line up for Budds Creek. I have to give a big thank-you to my team!”

The five-time GNCC Champion had a great Pro Motocross debut in the mud at Unadilla. Russell ran top five late in the first moto before dropping back to sixth after losing his goggles. In the second moto, he crashed into Justin Barcia early when Barcia lost control. He crashed later and was unable to finish the moto. He told Racer X’s Steve Matthes that he injured his elbow.

“Yeah, the rear tire just augured into me and ate me up. It hit me right in the funny bone and my whole arm went up. I was like, oh! Then I knocked the wind out of myself, too, because the bike literally just drove me into the ground and landed right on top of me. It was just a silly mistake.”

Quote of the Weekend

“As I’m going by him, he’s pulling his goggles off and I’m like, got you! I slowed up a little bit just to make sure I could roost him even more, and then I see he pulled off in the mechanics’ area.” — Phil Nicoletti on passing Benny Bloss.

What a feeling this must have been for Dylan.

Greatest feeling in the world #Slingshotengage