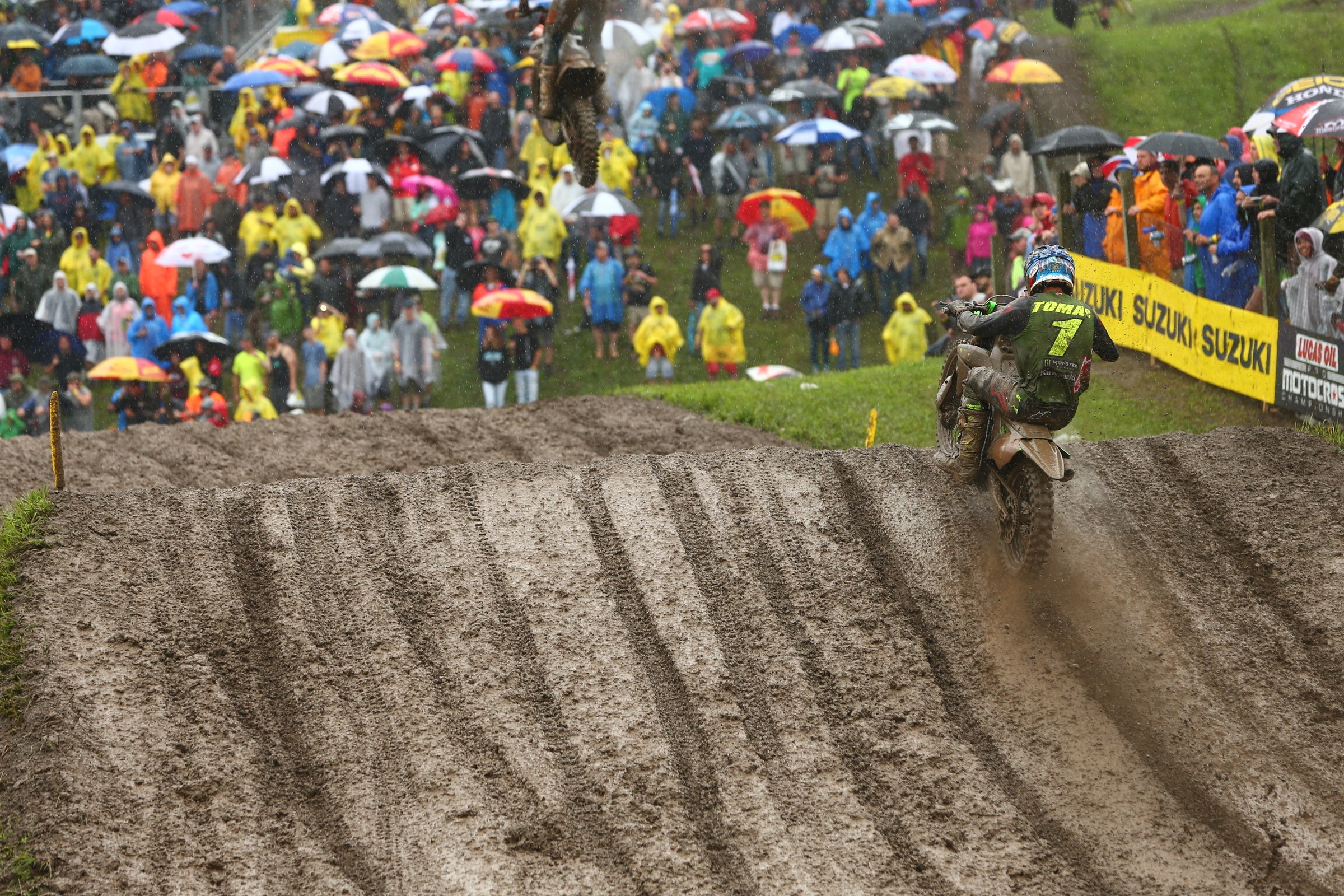 Welcome to the Race Day Feed, coming to you from Unadilla. Round ten of Lucas Oil Pro Motocross is set to play out today, and right here is where you can keep track of all the action. We’ll be posting updates right here on Racer X Online all day, so be sure to check back often. Posts are in chronological order, so scroll to the bottom for the latest info.

Lucas Oil Pro Motocross is back! Following a week off due to the AMA Amateur National Motocross Championship at Loretta Lynn’s, the series returns for round ten at the iconic Unadilla National in New Berlin, New York. Unadilla actually predates the Pro Motocross Championship, dating back to 1969. It was one of just two current tracks in the inaugural 1972 season as an Inter-AMA round. It joined the national schedule for the first time in 1976.

Unadilla was also site of the first-ever Motocross of Nations on U.S. soil, which was held in 1987. The MXoN has returned to the U.S. twice since—Budds Creek in 2007 and Thunder Valley in 2010—and is back on U.S. soil this October at RedBud. Prior to today’s motos, Team USA will be announced for the event. Stay tuned to Racer X Online for the official announcement.

Eli Tomac has caught fire again in the 450 Class. After a disastrous day at RedBud, Tomac has reeled off four consecutive moto wins and rebuilt his lead to 15 over Marvin Musquin. Unadilla, the most “Euro-style” track on the schedule, does fit Musquin, though. If he’s to get back into this championship, today will loom large.

In the 250 Class, the championship is now Aaron Plessinger’s to lose. He’s built a 59-point lead over second place Alex Martin and can eliminate third place Justin Cooper from title contention today. Plessinger has won three straight overalls and took an unlikely win at Washougal with 4-3 motos scores. Sometimes, when it’s your year, it’s your year.

Some news on the injury front dropped this week. Reigning Monster Energy Supercross Champion Jason Anderson was hoping to return this weekend from a foot injury, but Rockstar Energy Husqvarna team manager Bobby Hewitt told us this week that they are currently taking it “day by day” but that he expects Anderson to return for Budds Creek or Ironman.

The hits keep coming for Autotrader/Yoshimura Suzuki. Justin Bogle underwent successful submuscular ulnar nerve transposition surgery on Monday to repair a damaged ulnar nerve in his upper right arm and will miss the remainder of the Lucas Oil Pro Motocross Championship. Bogle has been dealing with fatigue and loss of strength in his hand since returning to racing at Southwick after missing much of the season with a broken upper arm sustained in San Diego. 250 rider Jimmy Decotis is also out for the weekend due to illness. For a full injury report, go here.

The first set of qualifying sessions have wrapped up at Unadilla, and we have a Monster Energy Yamaha 1-2 punch at the top. Justin Barcia, who grew up in New York, set the fastest time at his home race with a 2:09.123. He was more than a second faster than teammate Cooper Webb, who was second with a 2:10.868.

Points leader Eli Tomac slotted in third in the first session with a 2:11.165. Ken Roczen and Marvin Musquin rounded out the top five.

Joey Savatgy, coming off his first 250 moto win of the season at Washougal, took the top time in the 250 Class. His 2:11.556 topped Dylan Ferrandis’ 2:12.609. Justin Cooper, who made his pro debut at Unadilla last year, was third fastest.

Qualifying has concluded at round ten of the Lucas Oil Pro Motocross Championship and Justin Barcia has qualified fastest, with his first qualifying time of 2:09.123 beating out teammates Cooper Webb’s 2:10.868.

As in the 450 Class, the times from the first session held up in the 250 Class. Joey Savatgy is your fastest qualifier with a 2:11.556. Savatgy was just 15th fastest in the second session.

Dylan Ferrandis took the top time in the second session, and second overall thanks to his 2:12.609 set in session one. Aaron Plessinger bounced back to take second in session two, but he’s just 12th overall.

Monster Energy/Star Racing Yamaha held the top four positions in the second session, with Colt Nichols and Justin Cooper finishing behind Ferrandis and Plessinger. Jordon Smith was fifth overall in the session.

For a second straight year, rain has turned Unadilla into a slop fest. Rain pounded the circuit prior to the motos and the first 450 moto was a challenge for everyone—including the goggle guys. The motos were not cut short, but they did take out Screw U.

They say mud is the great equalizer and that proved true on the holeshot, as privateer Dylan Merriam took the lead off the start over Blake Baggett and Marvin Musquin. Points leader Eli Tomac was around eighth after the opening lap.

Marvin worked into the lead quickly and brought New Yorker Phil Nicoletti with him. Meanwhile, Tomac had goggle problems early in the race and had to pull into the mechanic’s area to get a fresh pair. He lost a couple positions, but not for long. Tomac began making moves and got Nicoletti for second on lap six. Up front, Musquin was having goggle problems of his own. Tomac made the pass and soon after Musquin pulled into the mechanic’s area for a new set of goggles. He didn’t lose any positions, but Tomac was getting away out front.

Tomac powered through the slop to take a more than 25 second win over Musquin. After having some problems, Nicoletti worked back into third and took his first moto podium since Glen Helen in 2015.

GNCC Champion Kailub Russell was running third late in the moto but had to ditch his goggles and eventually fell back to sixth behind Benny Bloss and Blake Baggett.

Ken Roczen finished seventh ahead of Justin Barcia, who went down in the first turn. Weston Peick and Toshiki Tomita rounded out the top ten.

Another wild moto in the slop at Unadilla, as Dylan Ferrandis survived late mistakes to take the first moto win at round ten.

Mosiman built a big lead early and held it until lap four when he crashed. Ferrandis inherited the lead and started to run away. He built a more than 20 second lead late in the race over teammate Aaron Plessinger. Ferrandis was cruising toward the moto win but nearly tossed it away a few times late. After making a mistake and running into the fence—his bike was stuck briefly, and fans pulled the fence away—he nearly lost the front end shortly after. Not soon after, a lapped rider went down in front of him and he had to navigate around. None of that seemed to matter, though, as Ferrandis found his groove again and took him the moto win by 35 plus seconds over Plessinger.

The second 450 moto holeshot went to Marvin Musquin with Eli Tomac right behind. Tomac got a great jump from the far inside. But the surprise early was Phil Nicoletti, as the New Yorker jumped into the early lead. Phil began to stretch his lead but made a mistake on lap two, which allowed Musquin to take over. Tomac made a pass for second on the next lap.

Justin Barcia jumped into the mix early, but lost the front and while trying to save it, ran right in front of Kailub Russell, who hit him. Russell went down again later in the moto and was unable to finish. He was credited with 30th.

Up front, Musquin was scorching the field. He built a huge lead early and never looked back. He won the second moto by 30.9 seconds. Eli Tomac finished second.

The battle for third got heated between Yamaha teammates Justin Barcia and Cooper Webb late. Webb passed by Barcia and Nicoletti to take third, but Barcia fought back and eventually took third from Webb. Webb went wide to try and block Barcia, which Barcia didn’t not appreciate and made a gesture at his teammate over the next jump.

Musquin earned the overall via his second moto win. Tomac finished second overall with Nicoletti rounding out the podium.

Tomac's points lead with remain at 15 heading into round 11 at Budds Creek next weekend.

In a day filled with wild and crazy races, the second 250 moto took the cake.

Cameron McAdoo took the holeshot over Jordon Smith, Mitchell Harrison, Dylan Ferrandis, and Joey Savatgy. Smith went down early and finished 12th. McAdoo led the opening laps, but we went down as well. He finished fifth.

Mitchell Harrison took over the lead and held off a charging Ferrandis and Aaron Plessinger, who had made his way into third. The three engaged in an all-out battle late in the race. At one point, Ferrandis passed into the lead, only to drop back to third when he made a mistake shortly after.

Heartbreak for Harrison on lap nine. A lapper got stuck in a rut in a corner and Harrison hit him and went down. Plessinger took over the lead, but Ferrandis was on the charge. He took over the lead on lap ten and quickly built a three second gap. He cruised to the moto win by 4.7 seconds over Plessinger. Savatgy made his way by Harrison late and finished third. Harrison took fourth over McAdoo, Justin Cooper, Alex Martin, Chase Sexton, Austin Forkner, and Colt Nichols.

Ferrandis took the overall via 1-1 motos ahead of Plessinger and Harrison, who scored his first career overall podium.