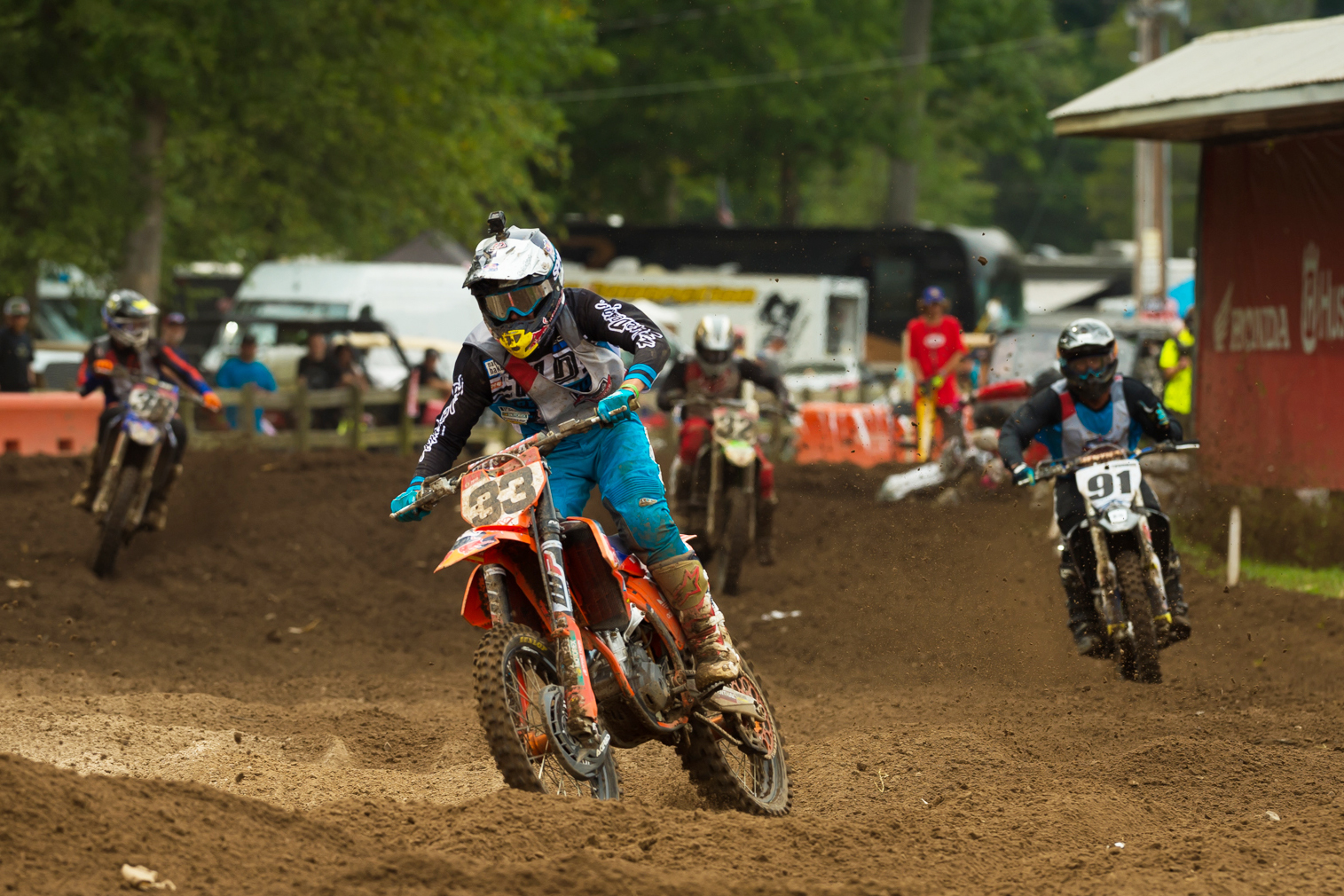 What’s happening down at the Rocky Mountain ATV/MC AMA Amateur National Motocross Championship, presented by Lucas Oil? Here’s your handy cheat sheet. Read up to sound like an expert on amateur moto.

These days, there are only two classes for A riders at Loretta’s—250 A and Open Pro Sport. Funneling everyone into these classes forces the fastest riders to race each other instead of hunting for trophies. It also leads to dramatic racing. In 250 A, Kawasaki Team Green’s Seth Hammaker fired first by holding off Derek Drake for a moto win. With Garrett Marchbanks already up to the pro ranks, Hammaker fills the next spot in the Kawasaki hierarchy. Drake and Mitchell Falk are Troy Lee Designs/Red Bull KTM prospects with pro deals looming. Hammaker’s first moto win was solid, but craziness was en route.

2. The Next Pros, Continued

The Open Pro Sport first moto was nuts. Both Hammaker and Falk got good starts, but Falk got taken down near the Red Bull arch and Hammaker went down in the split lane after the Ten Commandments. Justin Rodbell took the early lead, then Jyrire Mitchell grabbed the spot before Drake passed them both to get the lead. Drake’s moto win was a big one. Hammaker and Falk would rally to second and third.

Drake, Falk, and Hammaker are stars in the A classes, but TLD/Red Bull KTM’s Pierce Brown is thought by many as the fastest rider at the Ranch. He’s in the B and Schoolboy classes right now. He lived up to the hype, coming through the pack to win Schoolboy moto one over Rockstar Husky’s Jalek Swoll and Factory Connection/Amsoil (GEICO) Honda’s Jo Shimoda. But, again, craziness was en route.

After Schoolboy battles, Brown, Swoll, and Shimoda were back in 250 B. This time Brown got a good start and tried to check out, bu he crashed. And he crashed again. This left Swoll in control until two laps to go, when he crashed! Shimoda, known as a precise rider who doesn’t make mistakes, grabbed the moto win. The corners have caught out several riders this week, as the track goes from deep and loamy in spots to slick in a few key areas. It’s keeping riders on their toes.

The 125 B/C class is fun to watch, and it features factory-backed riders like Aiden Tijero (on a KTM; he’s the kid who beat Ryan Villopoto at the Hangtown 125 All Star race this year) and Ty Masterpool, now of Star Racing Yamaha. Both found themselves on the ground on the first lap of the first moto, and both logged epic comebacks. Masterpool was about last and somehow came back for second. Meanwhile, another KTM rider, Preston Kilroy, just dominated the moto with a huge lead.

The best battles of the week? We’ve already seen them. There’s no possible way for two riders to battle any closer than the ageless duo of John Grewe and Barry Carsten. In 50+, they spent about a lap and a half side by side, literally using two different lines on every part of the track. They battled all the way to the finish, with Grewe edging Carsten by about half a bike length. They battled that hard again in 40+, playing the side-by-side game the whole way, but this time it was a fight for second. Mike Brown was long, long gone out front.