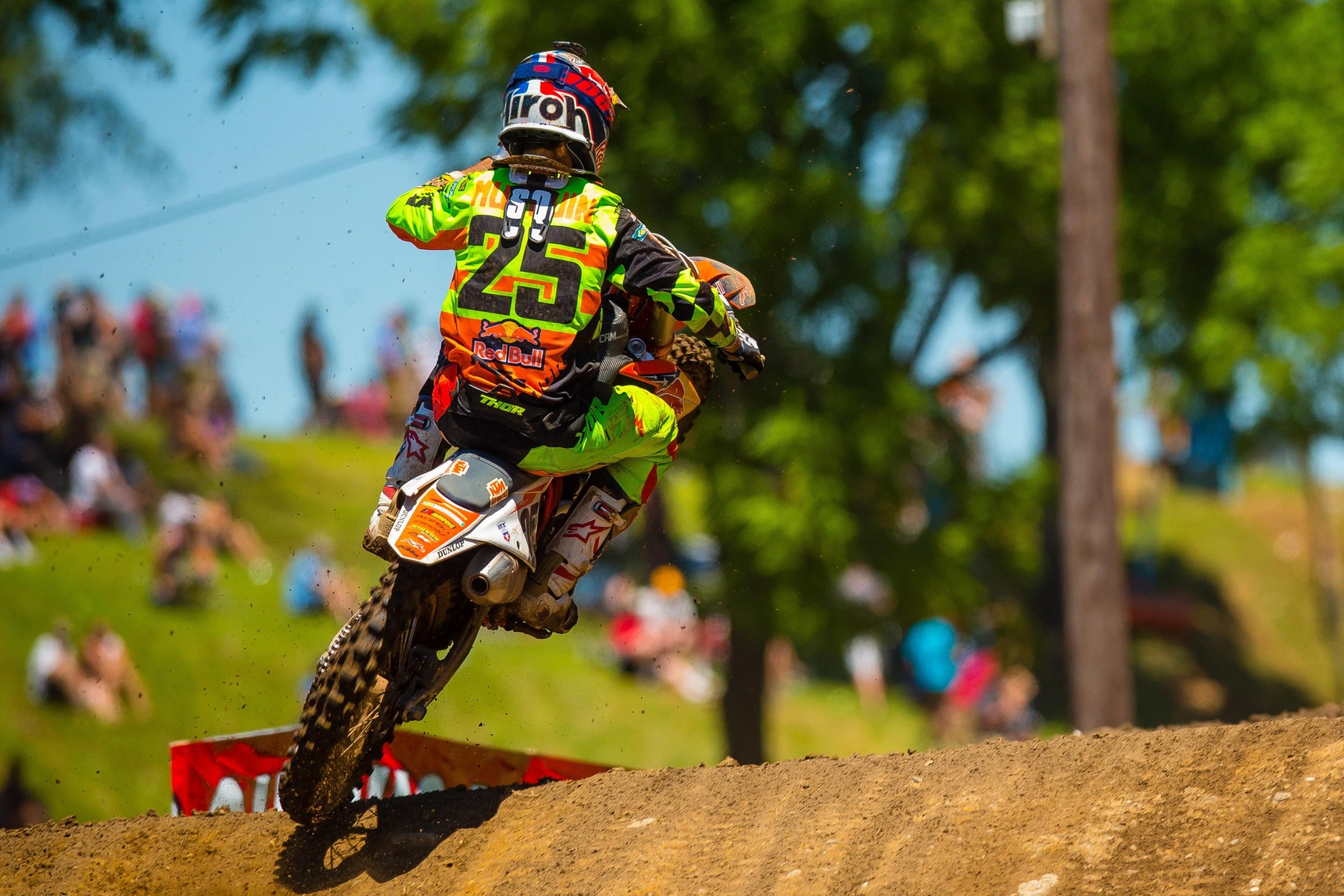 All year long, we have seen a tale of two classes between the 450 and 250. The 450 Class has been so steady and solid in its predictability. There has been a clear leader—a dominant rider who had whispers of a perfect season beginning to grow at one point. The 250 Class, on the other hand, was all over the map. Riders were entering and exiting the series almost on a weekly basis. Injuries were the real story as champions like Zach Osborne and Jeremy Martin both exited early, yet Dylan Ferrandis would return from injury to find winning form.

I really thought we had an idea of what to expect from each class; maturity and solid results from the big boys, chaos and drama from the young bucks. Eli Tomac had been putting in the results, slowly building up his points lead, while Marvin Musquin lurked with his own consistency. Austin Forkner, Alex Martin, Aaron Plessinger, Ferrandis, Joey Savatgy, Justin Cooper, and Shane McElrath have all been taking swings at the sharp end of the 250 Class. Until this weekend, that’s how it has been for the most part. Leaving RedBud, that story has changed dramatically.

Eli Tomac had only lost three motos this season coming into RedBud, with the worst of those being a third place at Muddy Creek. He was the dominant rider of this series and everyone knew it. His ability to put in lap times multiple seconds faster than anyone else was impressive, to say the least. For most, including me, Tomac winning his second consecutive outdoor championship was becoming a given. He has simply been that good this summer.

Fast-forward to Saturday evening after RedBud and all of that was in doubt. A mechanical failure in the first moto stole away a sure moto win, handing 22 points to his closest rival, Marvin Musquin. To make matters worse, two second-moto crashes would relegate Tomac to ninth place, losing another 13 points and, more importantly, the points lead. What seemed like an impenetrable points cushion had been eradicated in the span of mere minutes. A championship that practically had Tomac’s name already engraved on it is now up for grabs.

Musquin has capitalized on Tomac’s misfortune. He hasn’t had the pace to go with Tomac most times this season. That’s a fair assessment, but he is also no stranger to Tomac’s history. These series are a marathon, and several good weekends can be erased by one bad one, a la RedBud. Losing more than 20 points in a moto is devastating if your competitor is able to rack up runner-up finishes all the while. This same scenario has played out several times, including James Stewart and Chad Reed’s rivalry and Ricky Carmichael and Chad Reed’s rivalry, among others.

The fastest guy (Tomac) usually wins, but if their bad day is a huge points loss, the multitude of runner-up finishes and zero bad days for the other guy (Musquin) can sometimes win out. It’s cat-and-mouse and will often ebb and flow back and forth. Some weekends will leave us wondering how Tomac could ever lose and reassure his championship aspirations, but on that off day where things go sideways, is the damage too costly to overcome? That is where the rubber hits the road: managing the bad days.

Ricky Carmichael often said that championships are won on the bad days. Tomac has not had a great track record of managing those bad days and has left titles on the table because of it. We are now seven events and 14 motos into this outdoor championship. Tomac has won five of those seven overalls and nine out of 14 motos. That’s pretty strong, right?

That’s the rub. His incredibly good season thus far has been neutralized by one bad day in southern Michigan. Tomac has unquestionably been the best rider of this 2018 season, but here we sit, seven rounds in, and he’s not leading the points chase. If he can dominate the last five rounds like he did over the first five rounds, he will win another title. If he has more missteps, crashes, or mechanical issues like Glen Helen 2017 or Red Bud 2018, it may not matter how dominant he is on his good days. The bad days could be too much to overcome.

As for the 250 chaos, well, Aaron Plessinger seemed to put a stop to that on Saturday, didn’t he? At a track at which he hasn’t fared all that well, he put in two statement level rides. He put up a 1-1 score and stretched his points lead to 35. After two questionable races in Tennessee and Massachusetts, many wondered where the form from Mount Morris had disappeared to. Turns out, it was waiting for him at RedBud.

On paper, RedBud and Spring Creek looked to present an opportunity for Alex Martin. These have been strong tracks for Plessinger’s closest rival, and I looked for A-Mart to close the gap, seizing the opportunity at hand. The points leader was having none of it, though. While whispers were growing to sincere questions about how this title would shake out, Plessinger racked up 50 points and put the rest of the field into serious trouble. The momentum that Martin gained now seems like a distant memory. With one convincing victory, Plessinger took firm control over this series both on paper and in the competitor’s minds.

Spring Creek will be critical for both Martin and Plessinger’s individual plight, but if Plessinger can maintain the status quo, this thing may be all but over. It can’t be overstated how important Saturday’s performance was. The points lead jumped by nearly half, the momentum flipped sides, and Plessinger quieted the doubters. Big, big day.

Since the series started, I thought that the real battle would be in the 250 Class. I was expecting all of the 250 uncertainty and drama to unfold every week until Indiana’s sun went down. I thought the 450 Class would be fairly boring, to be honest. For six rounds, I don’t think I was wrong in that expectation. After seven rounds, though, we might be in for a different story entirely. Tomac and Musquin are embroiled in yet another world-class clash while the 250 suspense seems to have flamed out due to its own wild first half. Our inability to predict how this will play out is what makes racing so great, though. As soon as we seem to have things figured out, racing proves that we are all fools.