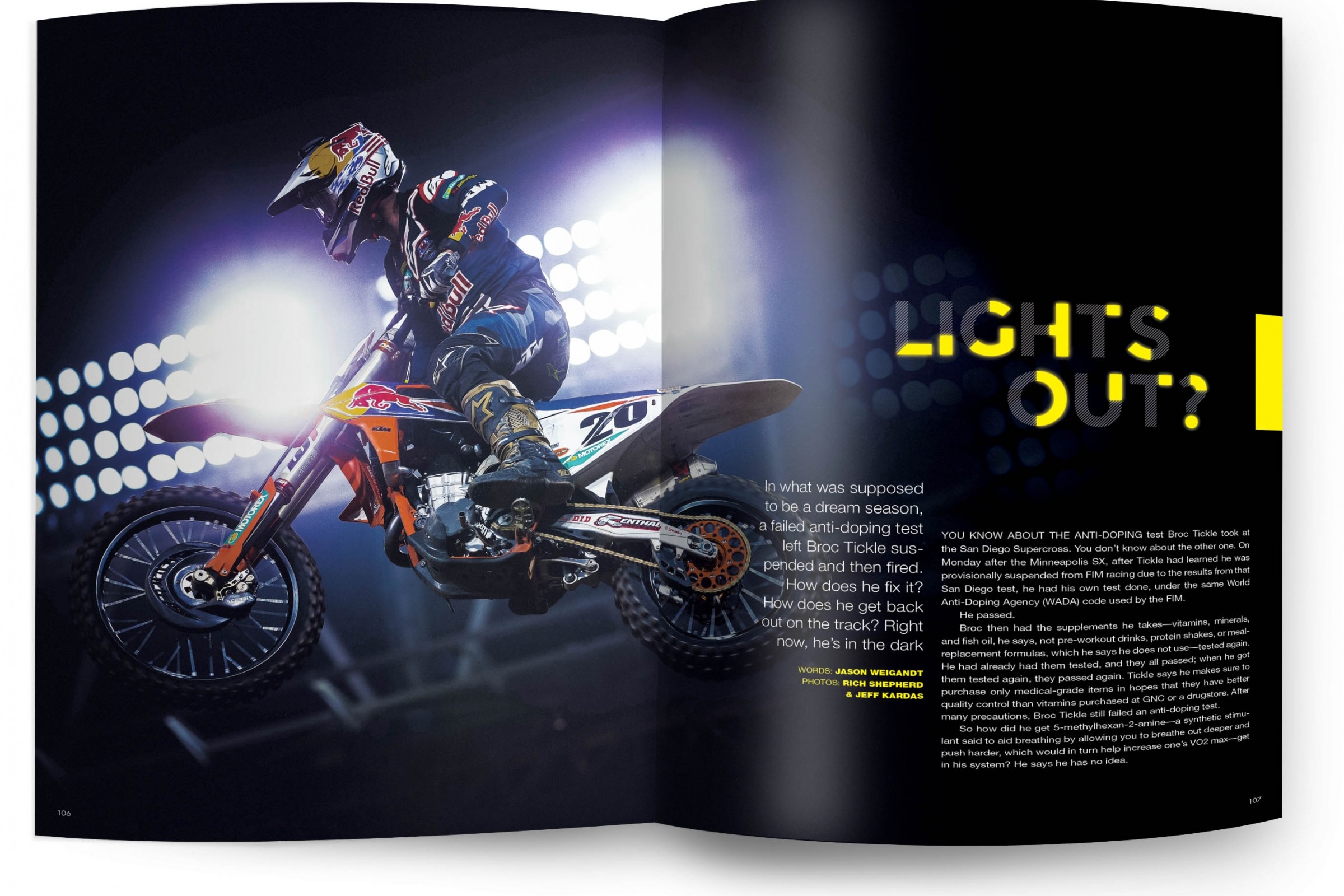 In the Mag, Lights Out?

Pick up your copy now and read features on how the 250 Class is no longer a young man's game and the loss of a historic motocross track, Zaca Station. Also, read about Bobby Moore's road to start to Road 2 Recovery and much more exclusively in the September 2018 issue of Racer X Illustrated.

If Broc Tickle is lying, he’s doing a good job of it. I talked to him extensively for the feature in our newest issue of Racer X Illustrated, “Lights Out?”, and all of his answers to my questions made complete sense, even though they fly in the face of the actual drug testing results from the San Diego round of Monster Energy Supercross.

In San Diego, Tickle tested positive for 5-methylhexan-2-amine. He has no idea how that happened. He’s deconstructed his entire week before the event, everything he ate and took. Nothing stands out. He’s had his supplements tested and they passed. After the announcement of the failed test came out in April, he actually took a test under the World Anti-Doping Code back home and he passed. The whole thing doesn’t make a lot of sense, but one part is clear—Tickle is provisionally suspended from competition by the FIM.

Broc has had the chance to rail on the system since, but his attitude to me in interviews seems more full of confusion than anger. He simply can’t figure out what happened, and he’d like to know more about how long he will be suspended. Communication with the FIM has been very minimal, so he waits.

When I called Tickle to begin this story, he was driving across the country—symbolically, almost, because he was leaving Florida and his stay with Red Bull KTM and Baker’s Factory to root himself in California and figure out what’s next, only he doesn’t know what yet. Tickle’s provisional suspension has opened the Pandora’s box about PED testing in this sport—everything from how they’re taken to what they do, who takes them, how they can be masked, and what the appropriate penalties should be if an athlete is caught using them. For Tickle specifically, working under Baker draws additional scrutiny.

I talked to Tickle quite a bit for this one, as well as his lawyer, Brian Harrison, Baker, and I reached out to FIM supercross race director John Gallagher. This is not Gallagher’s department, but I simply wanted to get a contact from the FIM’s PED testing division to hear that side of the story. Alas, the FIM’s statement has been pretty consistent—it ends each press release regarding Tickle with “Under the World Anti-Doping Code and the FIM Anti-Doping Code, the FIM is unable to provide any additional information at this time.” Gallagher doesn’t really operate in the orbit of FIM/WADA drug testing, and email attempts to other FIM officials didn’t result in any returns.

Basically, we got the same communication that Broc did, which is very little. He waits.

With that time, he does at least get to tell his side of the story. Check out the latest issue of Racer X to read it and subscribe today.