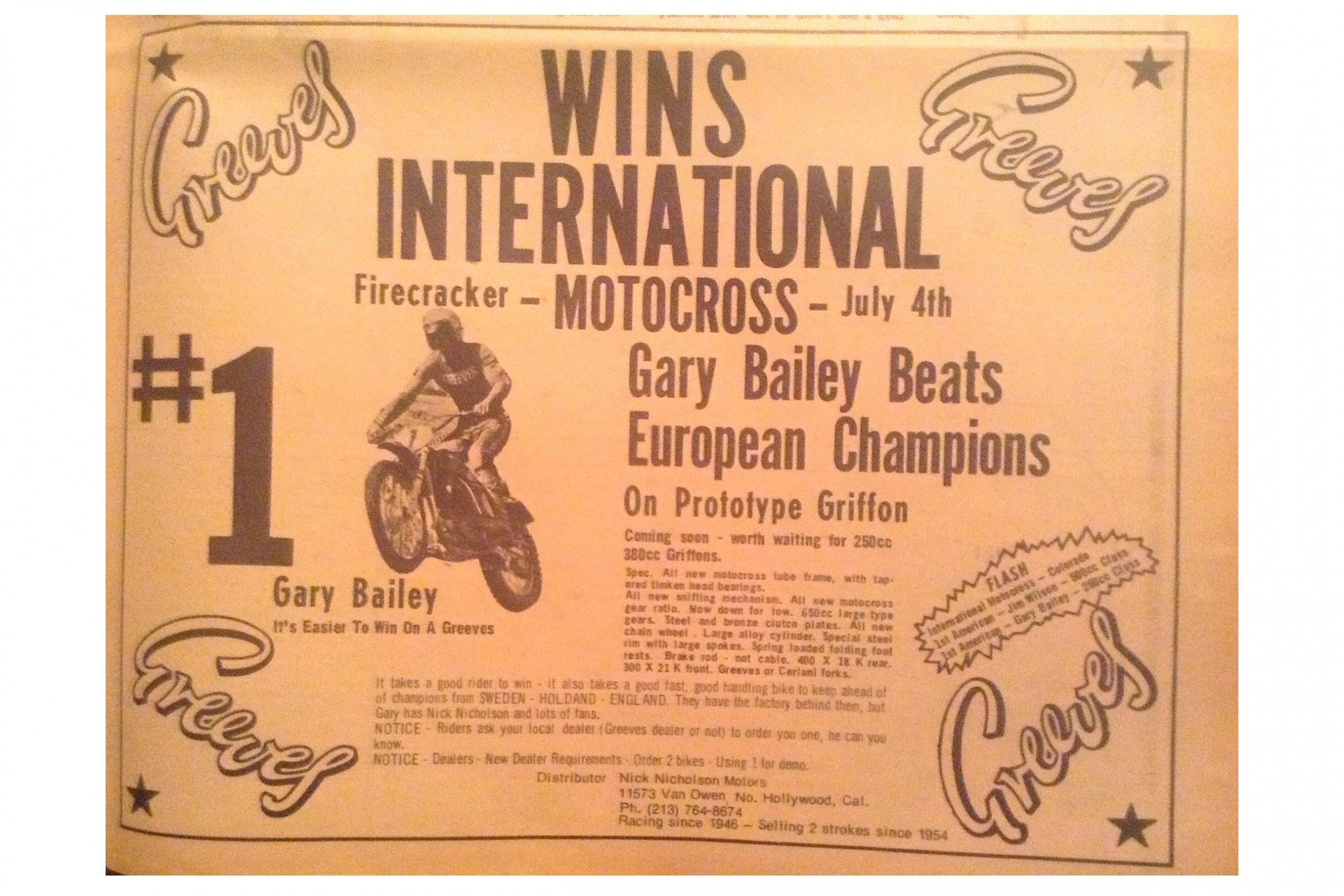 On This Day in Moto July 5

In a mostly forgotten moment in his glorious career, the veteran Bob "Hurricane" Hannah decided to go to France and race the 250cc Grand Prix and went 5-1 against the GP regulars. Soon-to-be FIM 250cc Motocross World Champion Eric "the Kid" Geboers was the race winner with 1-2 moto scores. British rider Rob "the Fish" Herring, who was originally from South Africa, finished third in both motos.

Let's start today by backing up a day. Something monumental in American motocross happened on Sunday, July 4, 1969. That was the day that Gary Bailey, riding a prototype Greeves 250cc Griffon, won the Firecracker International MX race at Saddleback Park in Southern California. In doing so, Bailey became the first American to beat the visiting European riders.

In a career first, Team Yamaha's Jeff Emig won the 1992 RedBud AMA 125 National. It was the beginning of what would be a championship-winning run for Emig to the 125 title at the end of the season, as well as the start of his great relationship with the RedBud fans. The win (and, later on, the title) would come at the expense of that other favorite son of RedBud, Team Kawasaki's Mike LaRocco, who finished second, with third going to Suzuki-mounted Ezra Lusk.

In the 250 Class, Kawasaki's Mike Kiedrowski beat the overwhelming crowd-favorite Jeff Stanton for the overall win, but the race would play into Stanton's favor, as his AMA Supercross title rival Damon Bradshaw crashed so hard that it literally knocked his AXO riding pants down. Bradshaw, already rattled by a late-season supercross crash that cost him the points lead, would go into the following weekend's Los Angeles finale battered and bruised. That race should have been ran weeks earlier, but was postponed due to the Rodney King riots in the same LA neighborhood at the Los Angeles Coliseum.

Fast forward six years and Jeff Emig was a Kawasaki rider and the defending AMA Supercross and 250 Motocross Champion. But he had not been himself in '98, struggling badly in supercross and losing that title back to Chaparral Yamaha's Jeremy McGrath. He was coming off a lowly 11th-place finish at the Budds Creek 250 National and seemed ready to park it until he figured things out. Instead, Emig went to RedBud and laid down a 1-1, topping the 2-3 of Yamaha's Doug Henry (on the thumper) and starting another title run. After winning three of the next four races and getting back in the hunt, he won the Spring Creek National at Millville, Minnesota, and ended his last title run.

In the 125 Class, another new favorite at RedBud, Ricky Carmichael, went 1-1 on his Splitfire/Pro Circuit Kawasaki KX125, topping the 2-2 of Yamaha's John Dowd and the 3-3 of Honda of Troy's Mike Brown. It was the first of what would be nine career wins at RedBud for Carmichael... Wonder if he's busy this October 6-7?

In the 125 Class, Suzuki got its vengeance as Mark "Bomber" Barnett topped a trio of Red Riders in Johnny O'Mara, Jim Gibson, and Rich Coon.

And check out the Cycle News ad for the upcoming (and much-maligned) film On Any Sunday II.

Today is also the birthday of two of the greatest motocross racers of all time, the "Flying Finn" himself, four-time FIM Motocross World Champion Heikki Mikkola, and seven-time AMA SX/MX Champion Rick "Too Hip" Johnson. Happy birthday, Heikki and RJ!