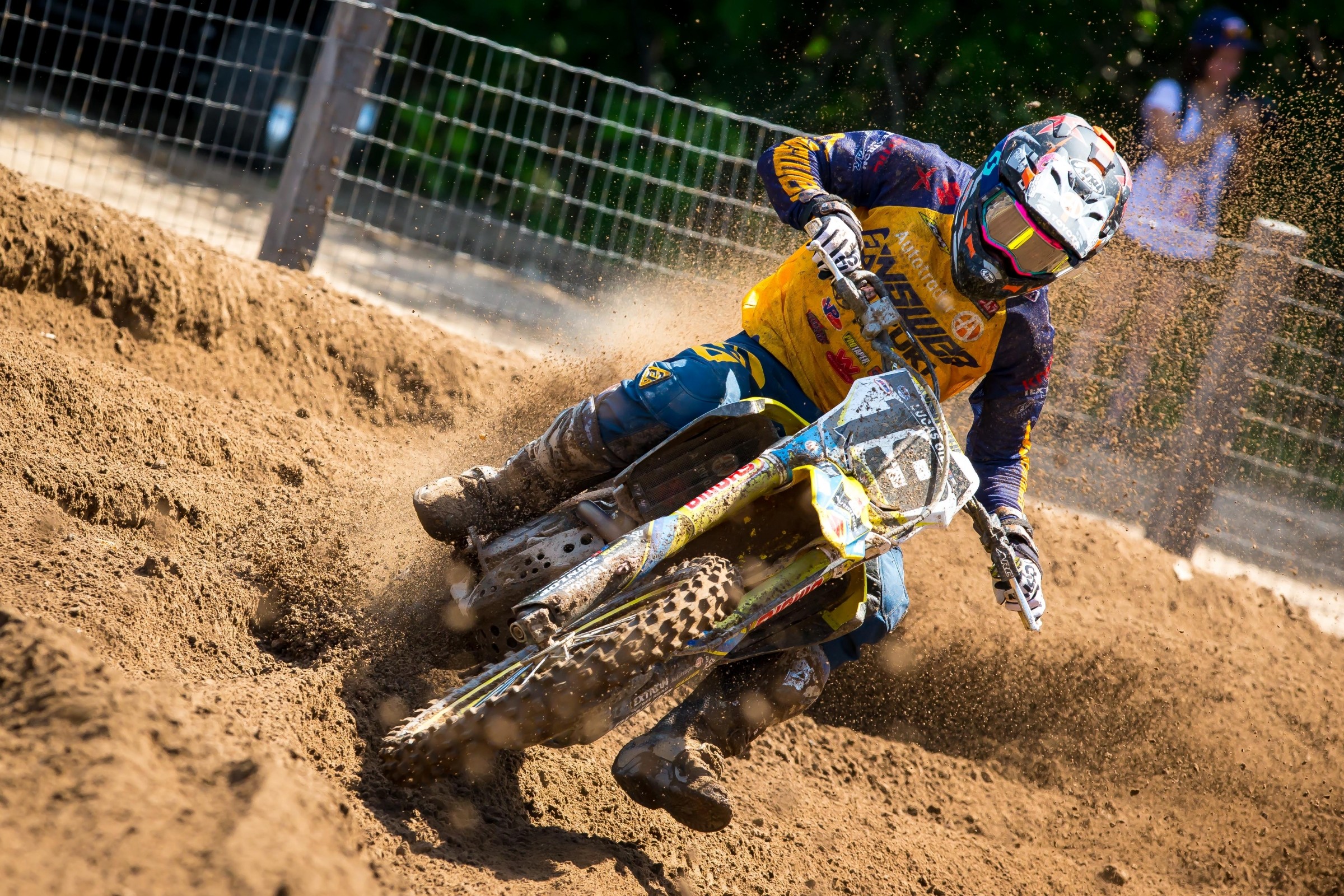 Insight Justin Bogle On His Return

Autotrader/Yoshimura Suzuki’s Justin Bogle made his long-awaited return to racing Saturday after sustaining a broken humerus during Monster Energy Supercross. Bogle had great starts at Southwick, grabbing the holeshot in the first moto, but didn’t quite have the race pace after such a long layoff. He went 18-20 for 23rd overall on the day.

Steve Matthes spoke with him about his first race back.

Racer X: First race. It’s just going to get better from here, but your starts are on point.
Justin Bogle: It’s not going to get much worse. It’s definitely been worse. I haven’t raced in almost a year, but supercross I’m not really counting. I was kind of half-asleep at those. I don’t know what I was expecting coming into Southwick as my first one in a year, but it was brutal.

I admire you getting the start though because you knew you didn’t have it in you. But you’re like, screw it, I’m doing it anyway.
The thing is about that, the whole JGR team, I’m trying to get them some love on TV, if not just for a lap. I got to do something. It was a hell of a day, honestly. It’s been such a trying year, that just the fact that I’m out here I’m okay. It’s going to get better. I didn’t end up in an ambulance like I have in the past. I’ve been working so hard that it was a bit disheartening out there, that first one, but what are you going to do when you’re not racing so long and you get out there? Especially when you holeshot and you’re in that with those guys that have been up there all year, it’s tough. It’s a shock to the body and the mind and everything.

And the worst track of the year to come back to. You probably could have waited a week.
Yeah, but there’s only one way I’m going to get me better, and that’s by getting out there and doing it. I can’t just avoid it. I got to get out there and I can get better now. So from here, I can improve. If I can do what I did for the first ten, 15 minutes, I would have been fine. But I was shot after the first 15 minutes.

I guess a guy like you—last year you won motos, you won overall—if you’re doing the same work off the bike, and I assume you are, then you’re like, I know this works. There’s no questioning your program, right?
No, I’m not questioning anything. If anything, I’ve got more focus. It’s just my body has been through hell. I’ve kind of really been through it in the last year. I’ve hit all sorts of peaks and rock-bottoms and all kinds of shit in my life. So just staying strong through that and just to keep going, it’s tough, but when I get out there and I’m at least out there, so I know I’m going to get better. I don’t know when in my life ever that I’ve holeshot and got 20th without a crash. But it took everything I had to score a point today. But I know that’s not as good as I am. I should be out front, but it just does not happen overnight. It doesn’t matter how hard you work; it doesn’t happen overnight. Not when you’ve been out as long as I have, and even before that, I wasn’t too awesome there. I just started getting the buzz rolling. It just takes time. It’s hard to remember that, but I got a good group around me, so they keep reminding me when I want to punch myself. What are you going to do?

You got to know what you’re doing off the track works, so it’ll just be better.
The thing about all of this is, like I said, it takes a man to go out there and pull the holeshot when you know you only got ten, 15 minutes in you.

I’ve worked with some riders that would not be doing that.
Rene was my mechanic today stepping in for Ben. I told him, pack me a good one. I was a little bit outside because I did pretty bad first moto. Pack me a good one because I’m going to worry about that one. I’ll figure the rest out when we get to it. I’m worrying about that. I was…shifting. Hit the second shift and I was like, wow, holeshot. Sick! Figure it out from there. It’s all good.