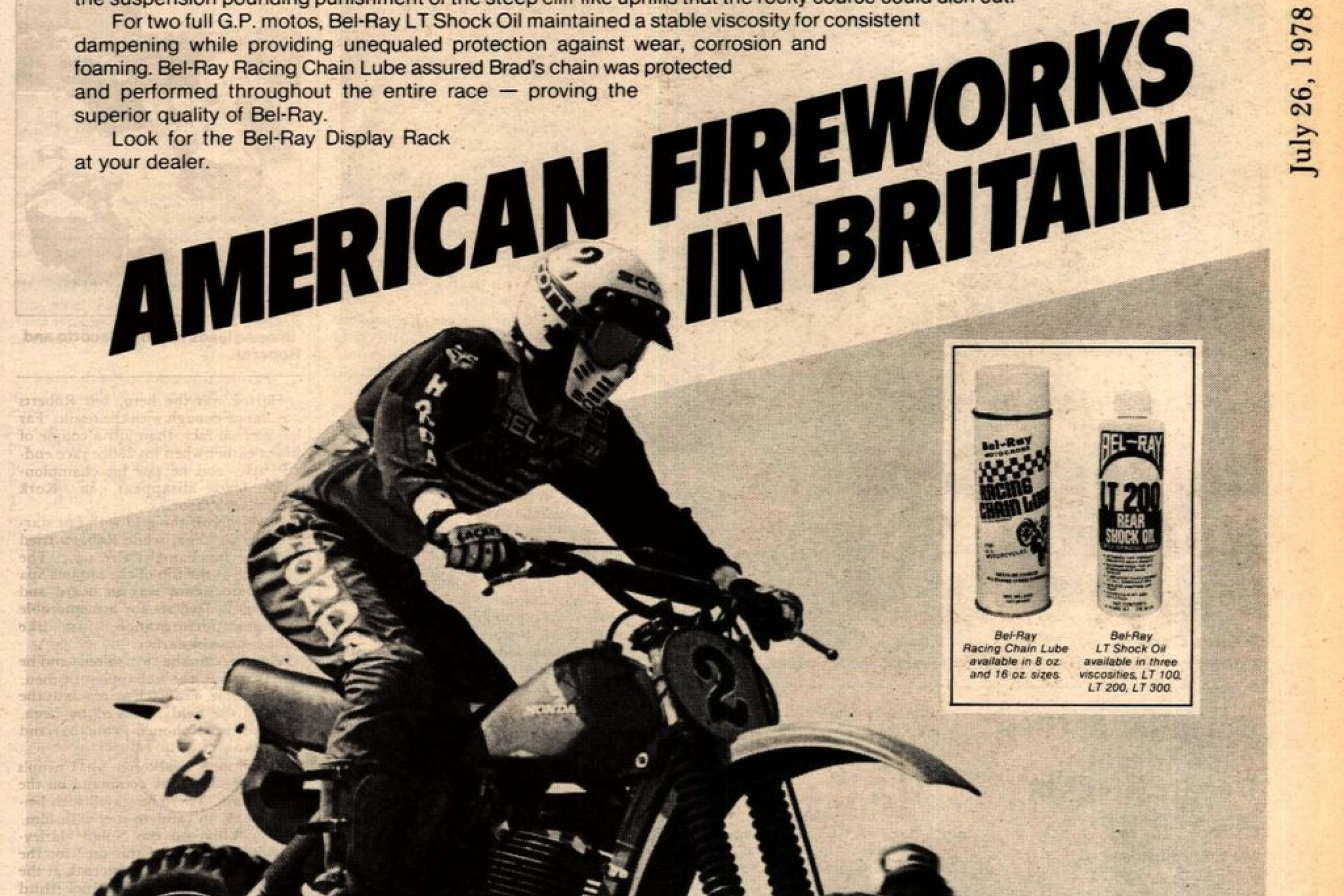 On This Day in Moto July 2

When it rains, it pours, and that can go for RedBud, too! The 1978 version of the July 4th weekend classic was swamped by a storm, as you can see in Jim Giantsis' Cycle News coverage below. The event was a 250/500 Mr. Pibb AMA Pro Motocross National, and the winners were Suzuki's Kent Howerton (250) and Yamaha's Rick Burgett. Howerton's win ended Bob Hannah's perfect season, as the Hurricane suffered a chain derailment in the first moto. Burgett went 1-3 to take the win over privateer Mickey Kessler of New Jersey, who ran 3-2 in the deep mud and water.

Straddle Line Park in Olympia, Washington, hosted the combined Inter-Am and AMA 250cc National Motocross Championship, and Yamaha's veteran superstar Torsten Hallman got the overall win with 3-3-3 scores. U.S. Yamaha rider Gary Jones won the first moto over another Swede, Hakan Andersson, and Hallman. Andersson won the second moto over yet another Swede, Arne Kring, with Hallman again third. It looked as though Andersson would win the last moto and the overall, too, but he had bike problems, as did U.S. riders Jones and Kawasaki's Brad Lackey. In the final moto, Kring won. Hawaiian legend John DeSoto was second and Hallman was again third, which was enough for the overall.

Coincidentally, when you look in the Vault at the results from this race, they show Swedish ex-pat Gunnar Lindstrom, who was working for Husqvarna at the time, as the overall winner and none of the Swedes who actually went 1-2-3 (Hallman, Kring, and Arne Lindfors). International riders without AMA licenses were not counted in the "national" results, giving Lindstrom, the future manager of Team Honda, the win despite actually finishing fourth in the overall results in that first year of AMA Pro Motocross.

At the RedBud AMA 1250/250 National, favored son Jeff Stanton went 1-1 on his Honda CR250 to score a popular win. Kawasaki's Jeff Ward ran 3-2 for second while Stanton's older teammate, Rick Johnson, who was trying to come back from the wrist injury he suffered at the series opener in March in Gainesville, Florida, went 2-3 for third.

The 125 Class went to another Honda rider, George Holland, the defending AMA 125 National Champion. He was followed by Jeff Matiasevich of Team Kawasaki and Yamaha's Damon Bradshaw.

Over in Europe, U.S. sensation Trampas Parker won another 125cc Grand Prix in what was becoming the story of the summer. Parker, relatively unknown anywhere before the season, captured his fourth overall win in the first seven races, this time in Czechoslovakia. Parker won both motos on his Farioli KTM while factory KTM rider Bob Moore, yet another American, was second overall, and 15-year-old Stefan Everts third.

And in the 500cc Grand Prix in San Marino, Italy, Australian Jeff Leisk took the overall win with 1-2 finishes, topping Honda teammates David Thorpe and U.S. Kawasaki rider Billy Liles. Eric Geboers, the points leader going into the race, DNF'd a moto and finished second in the other.