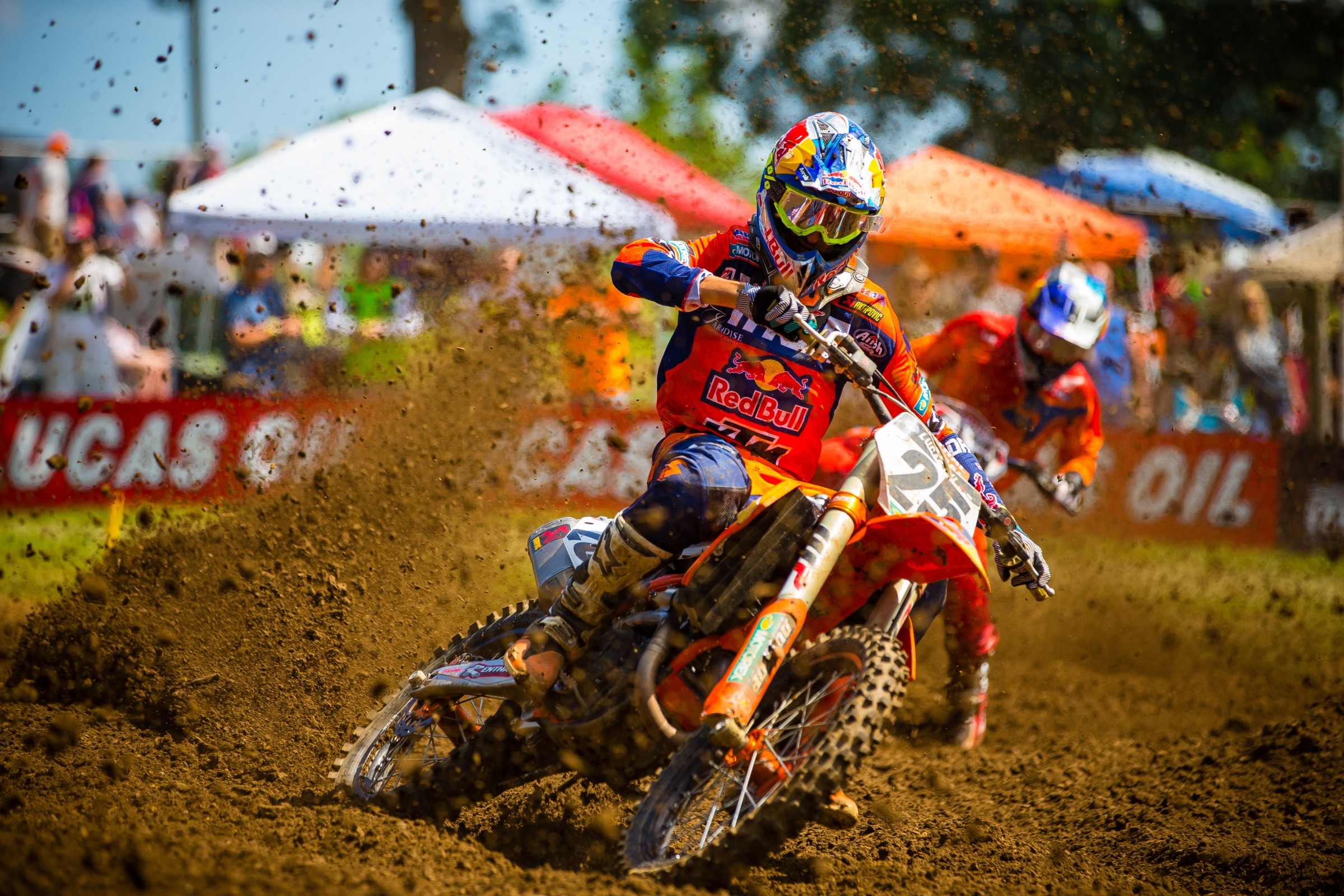 Muddy Creek is in the books and Eli Tomac continued to dominate the 450 Class, keeping his overall win streak alive at five in a row and extending his points lead over Marvin Musquin.

In the 250 Class, we saw some wild moto scores equal podium finishes. Shane McElrath got his first 250 overall win with 3-2 scores, Dylan Ferrandis went 11-1 for second, and Chase Sexton went 8-4 for third overall. But the real story was Jeremy Martin crashing out of the second moto. He will miss the rest of the season, leaving his brother Alex and Aaron Plessinger to fight for the title.

Musquin's 2018 outdoor campaign has seemed pretty vanilla so far. He hasn't been bad, but he hasn't been able to match the excellence of Eli Tomac yet. He's won two motos and finished in the top five in every moto this year despite some bad starts, but it still seems like something is missing.

Wondering if something was actually wrong with Musquin or if my mind was just playing tricks on me, I went back to last year to compare Musquin's first five rounds from 2017 to 2018. The first three rounds of each season were actually pretty similar, finishing in the top four in each moto and grabbing one win in 2017. The next two rounds of 2017 went off the rails as he suffered a knee injury during practice, and by the tenth moto of the season, Musquin reached his lowest point, finishing 34th in the moto and falling 34 points behind Tomac for the championship.

Compare that to this year, where his worst finish so far has been a fifth in the first moto at Muddy Creek, and he's actually scored 49 more points through five rounds than he did last year (210 versus 161). Musquin's been better this year, but his only problem is that Tomac has also been a lot better. He's currently 32 points behind Tomac in the points, which is two fewer than last year when he was able to get back in contention later in the season. But with the way Tomac is riding this year and the lack of depth in the 450 Class, podiums won't be enough—he'll have to rip off a string of wins.

Earlier this week, Weege declared that the 250 Class had officially come off the rails at Muddy Creek. With Jeremy Martin's horrific crash, we lost another title favorite (Zach Osborne's year was done after Thunder Valley) and we're left with  A-Mart battling Plessinger for the title, with the "rookie" Justin Cooper lurking not too far behind in third.

I wanted to plot of the current top five championship contenders' points for each moto this season to see how we've progressed to this point so far. I also included Osborne just because he was the leader for the earlier rounds. I have to say, after I got done plotting out the points, I got a little bummed looking at what could have been. Plessinger, Osborne, and J-Mart were so close to each other after five motos, and non of them had shown they could take complete control of the series. But staying off the ground is part of the game, and in that way, Plessinger has taken a strong hold on the lead, sitting 29 points ahead of A-Mart.

Over the last two or three years, Plessinger has started to build a reputation outdoors. When he doesn't win, he doesn't finish very good. In fact, if you take his average finish when he doesn't win from 2016 to present day (I didn't count 2015 because rookie years are always weird) is 7.84. And he hasn't done much to buck that trend this year, averaging a finish of 5.1 when he isn't in first place.

He currently has a a 29-point lead over Alex Martin, who is having his own issues lately. So he has a decent cushion to work with right now, but it's hard to imagine keeping that cushion when your bad finishes are in the 5-10 range. And with the way this year is going, there's really no predicting what will happen, but we'll let you guys try anyway so you can brag later in the season that you got it right.

Does Plessinger keep his points lead for the rest of the season? Or do A-Mart, Cooper, and Forkner close the gap?