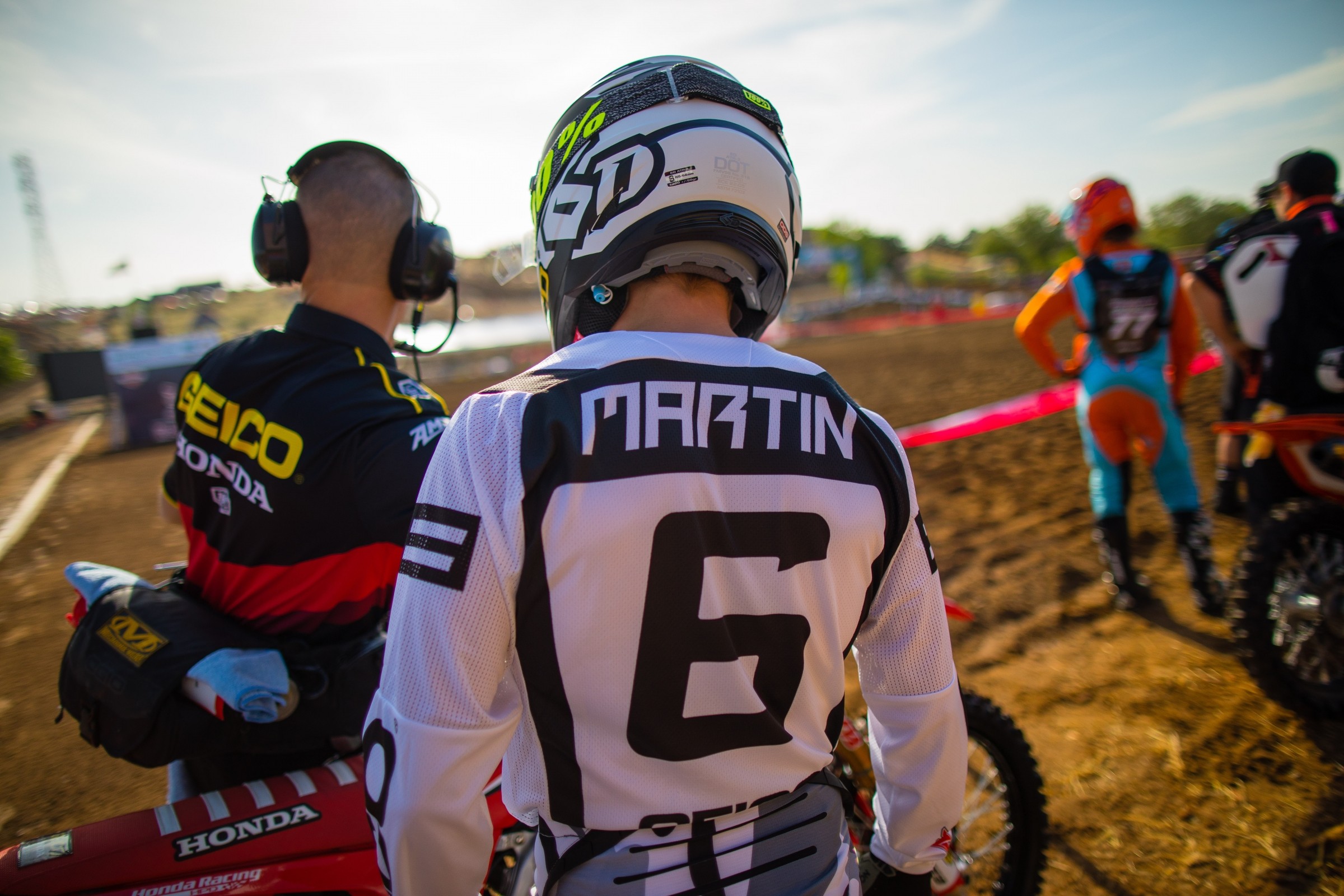 If anyone were trying to sell stock in the 250 Class of Lucas Oil Pro Motocross, the Securities and Exchange Commission would announce a freeze on all trading, because these recent ups and downs should require additional investigation. Five rounds in and this season has made absolutely no sense whatsoever, to the point where Jeremy Martin crashed out of the season but still barely lost ground in the series standings, and his brother Alex briefly led the overall for the day with 12-1 scores. It was that nutty. It has been that nutty.

It wasn’t supposed to be this way. With proven champions Zach Osborne and Jeremy Martin in the field, consistency wasn’t supposed to be an issue. Instead, Osborne suffered an early thumb injury which lead to more crashes, and then a first-turn incident out of his control ended it all. In the same moto that would be Osborne’s last, Martin locked down a moto and overall win to take the points lead and stake his claim. He looked headed to another win until his bike broke at High Point. He won the first moto at Muddy Creek, but a vicious crash with Justin Cooper on the first lap has ended his season—more on that in a bit. With Osborne and J-Mart’s struggles, you’d think you could at least count on Alex Martin, the other veteran contender, but he’s suddenly become a crasher for the first time in his career. Four straight motos with unforced errors for A-Mart.

The only preseason prediction to come true? The unpredictability of Aaron Plessinger. In previous seasons, Aaron built the rep of killing it one weekend, only to be mediocre the next. Well, he’s doing exactly that again this year. He’s gone 1-6-1-7 in the overalls the last four weeks. The 20-point lead he inherited when J-Mart’s bike broke at High Point was nearly erased in one moto at Muddy Creek. Which Aaron will you get each weekend? Well, Southwick is round six, and he seems to do well in the even rounds. At this point, that’s about as reliable a predictor in this class as any.

Plessinger has a rookie teammate in Justin Cooper, and he’s rapidly improving. Cooper has been the best starter this year and had begun to solve the consistency thing, going 3-4-2 over three-straight motos. With Alex Martin’s crashes, Cooper had quietly snuck to third in the series standings after Muddy Creek’s first moto, and you’d have to think he would continue to improve as the season goes on. Genuine title contender? Well, some of that got washed away in the Martin crash. J-Mart’s season is done, but Cooper was beat up, too, and he finished the moto 28th.

Muddy Creek is over and done with. Started the day out really great being fastest in both qualifying sessions. First moto P-2 and second moto had a freak racing accident on the first lap, really such a bummer for the both of us and it isn’t an easy pill to swallow hearing the news of @jeremymartin6 Wish him a speedy recovery and somehow everyone was able to avoid me which I’m extremely thankful for. Man I’m extremely sore today, but I’m also nothing but thankful for my support crew??Some things you just can’t prevent when there are so many riders in such a tight space, there is another angle of the crash if you swipe right. Again, freak accident out of both of our control while once in the air, gotta keep moving forward. Pc: @mikevizerphoto

The Martin thing really stole the headlines from Muddy Creek, though, because this is the worst-case scenario in this sport. It’s the thing that shakes us to the core: A dude who is not known for huge crashes suffers a huge crash and potentially catastrophic injury. A wildman is one thing, but to see someone like J-Mart writhing in pain, unable to move, serves to remind of one stark reality—anything can happen to anyone.

Luckily, Martin’s back injury will be painful, but not career-threatening. He should make a full recovery, but it absolutely sucks because it’s not like he was trying to do something stupid and suffered the consequences. This is an experienced, smart racer, and even he was not able to stay safe. That hurts in more ways than one.

With surefire contenders Martin and Osborne done, this has officially become one of the most unpredictable seasons in a while. It’s not a shocker to see the very capable Plessinger leading, but even his own performances have been impossible to predict. Shane McElrath going 11-11-8-6 at the first four rounds and then suddenly winning round five, the first 250 National triumph for he and his team, makes so little sense. But in a way, it kind of does. That’s pretty much what this whole season has been about.