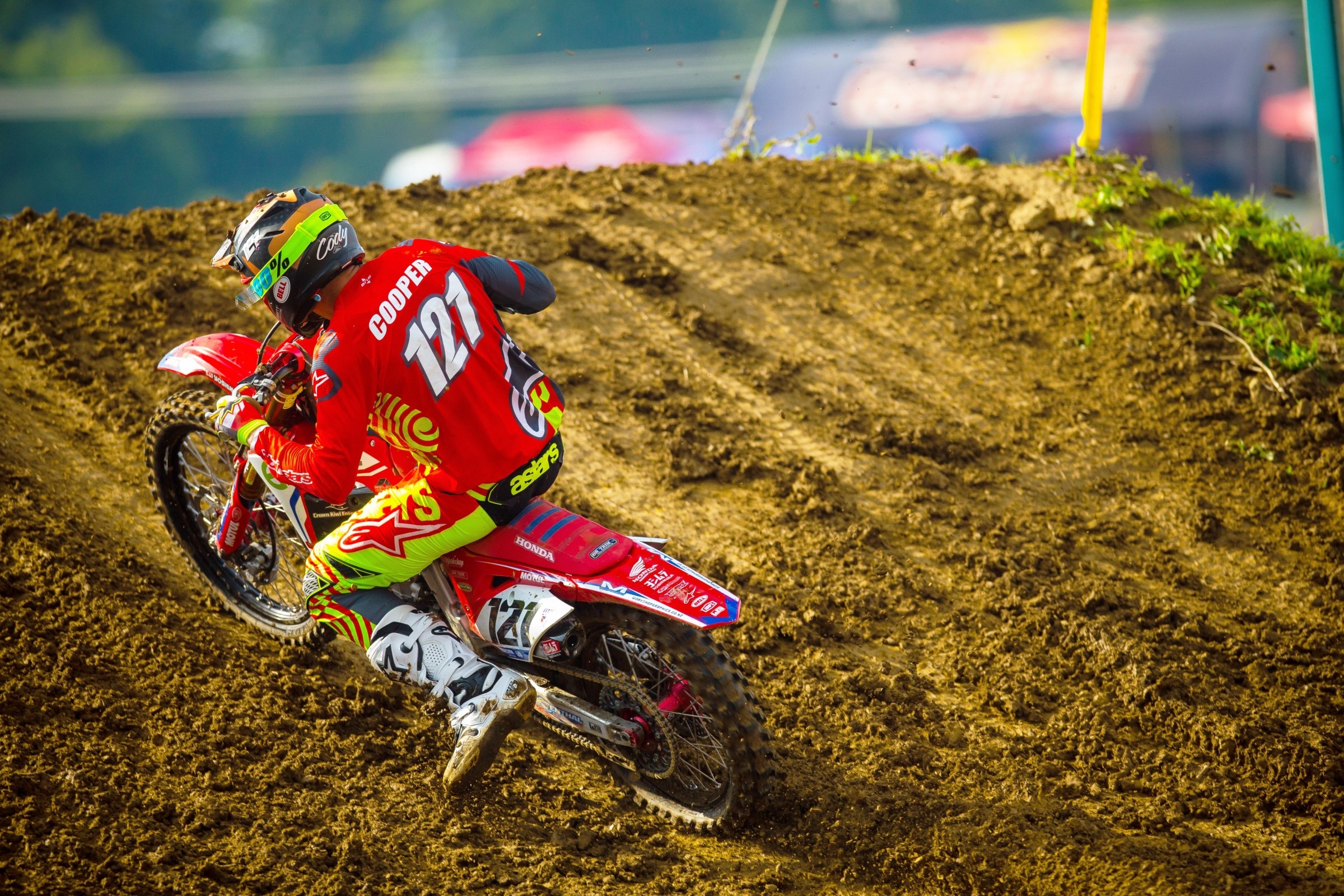 Between the Motos Cody Cooper

“Obviously I’m getting quite old now, so we really love racing here,” he said. “The tracks and atmosphere is awesome. So I figured I might as well come and enjoy one more ride. Just make fun of it.”

At High Point on Saturday, he had his best ride of the season, going 8-10 for ninth overall in the 450 Class. Steve Matthes caught up with him after the race.

Racer X: Top ten overall today. Your best race of the year. Great job out there.
Cody Cooper: Yeah. I’ve been working on some starts with Gary Semics and just got two good starts and it helped me. Put me into a spot. Obviously, there was a crash in the first turn, so that helped me a little bit on the first moto to get eighth. The fitness is a little bit off. We’ve been doing the traveling thing a bit more than practicing. It’s all about having fun for us this year and traveling America and having a look.

I didn’t know you were doing them all until a couple weeks ago. You sure you’re not going to miss any of your season Down Under?
No, our season finishes end of March. It’s too wet and whatnot back there at the moment, so we wanted to follow the summer. Obviously I’m getting quite old now, so we really love racing here. The tracks and atmosphere is awesome. So I figured I might as well come and enjoy one more ride. Just make fun of it.

First moto you were running up there. You were like fourth for a long time. What’s the pace like?
The pace is fast. Obviously that little voice in your head is like, “You don’t need to do that.” We’re still struggling a little bit with suspension. I think we haven’t had a proper test day. Bones has been awesome helping us and stuff like that. But we’re just over on the East Coast now and they’re over there. We got some stuff to try this week. Might make it a bit better.

The track was tough, huh? The ruts and everything?
Yeah. I think it was one of those tracks where for me if I rode at 95 percent and not rode hard, then I’d do good laps, just tick them off. That’s all I sort of did, really.

So you’re traveling around the country. You’re wasting all your race winnings Down Under for this trip. Is that it?
Yeah. We’re already in some debt. It’s worth it. It’s been good fun. Seen a few people that I met over here in my time and new people.

What did Semics help you with the starts?
I can’t say. I think it’s more just the routine, doing them and discussing it and that sort of stuff. I don’t change too much. Just a few little things and make sure a two-feet-down starter that I’ve been putting one foot up. My technique is a lot easier to learn than trying to learn it… I don’t know. It works better. Just one foot up helps a lot too.

You got to be stoked with your early-season success. Riding well, good in the points. You got to be happy.
Yeah, if the debt wasn’t there. It’s good to be there. I just got to keep remembering it’s for fun and make it fun. It’s whatever it is each weekend.

How are you finding places to ride? I guess you haven’t really started yet, but how is that going to go?
Over here it’s been good. We’ve been staying with Rob Buydos. He has contacted a few people to ride with. One track that’s called NAP City, it rained quite a lot this weekend and they ripped there, and it was unreal. Big ruts like this and a bit down and uphill. So we got some good riding there and at Gary Semics’ place. So it’s been not too bad over here. Hopefully it sort of rains like Florida weather and we get good tracks.