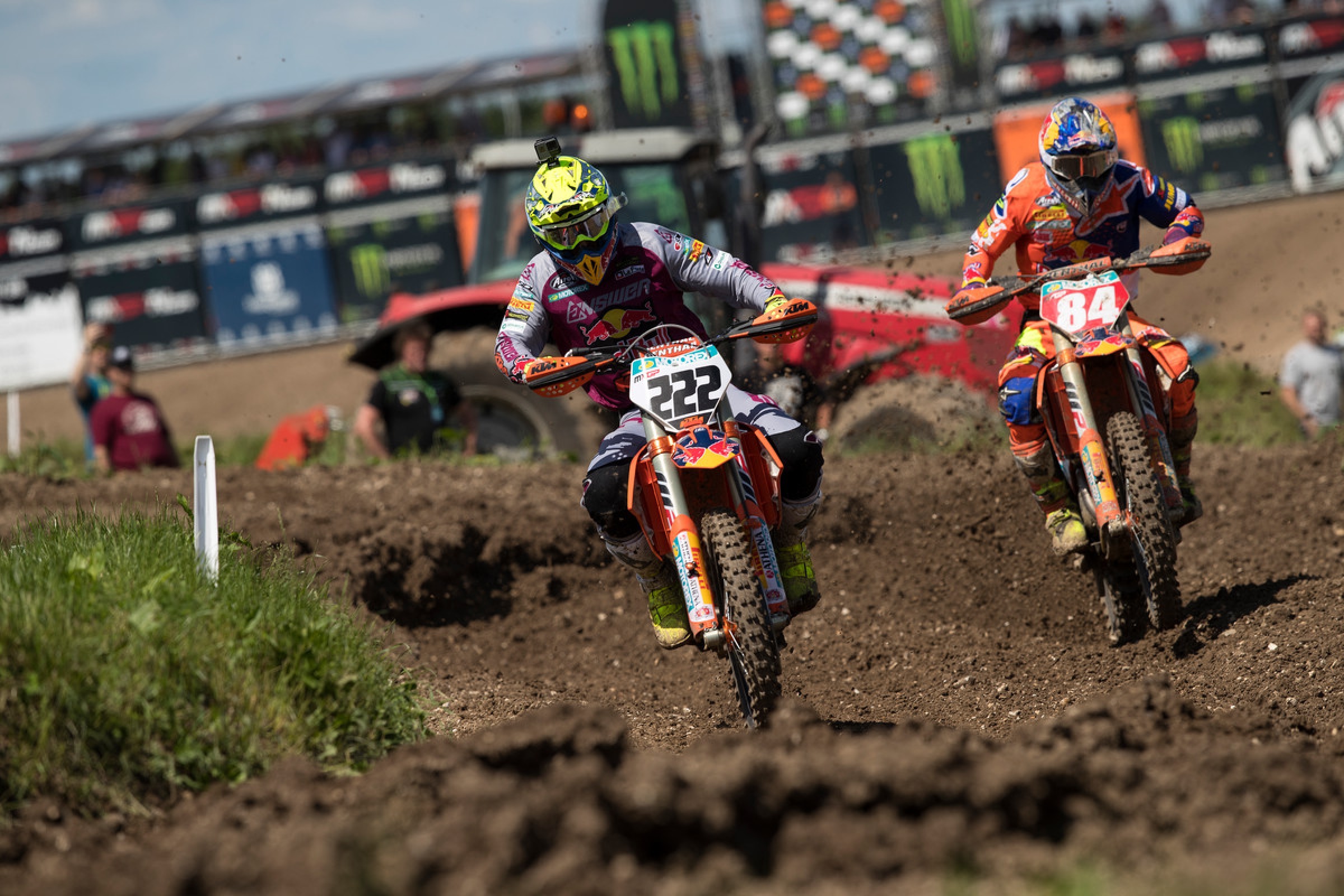 This past weekend, I made the trek across the Atlantic to visit our motocross friends in the MXGP series. Italy’s Ottobiano Motorsport venue made its second consecutive appearance in the series and didn’t disappoint. The Italian crowd came out in droves to support nine-time champ Antonio Cairoli. Temperatures crept up near 90 degrees, and the brutal sand track tested riders all weekend.

It was a great experience for me personally, too. I had the privilege of commentating the weekend’s racing alongside former GP star Paul Malin. Being tied in to the action gave me much more perspective than I have ever had with the FIM Motocross World Championship. That perspective furthered a dynamic I had been keying into as this series developed.

For anyone who has been watching even casually, KTM’s domination has been overwhelmingly apparent. In both MX2 and MXGP, KTM controls the top two spots by extremely wide point margins. Inside those classes, there are also two separate KTM teams. First, the team led by Cairoli and his nine world championships. Owned by Claudio de Carli, the Italian based KTM team also fields MX2 superstar Jorge Prado. They pack a strong 1-2 punch in their respective classes and were able to win another world title in 2017. Going into 2018, the hopes were to continue Tony’s success and also further Prado’s development.

Prado has supreme talent, but also had a few holes in his game to address. At Ottobiano in 2017, for instance, the heat overwhelmed the young Spaniard. He was unable to even line up for moto two, making life much easier for eventual champ Pauls Jonass. Finding answers in preparation, training, and rounding out Prado’s total package were big priorities this past winter. Prado made the move to southern Italy to work with Cairoli more closely, riding in warmer temperatures and learning the ways of success. How much improvement young Prado could find in one off-season was anyone’s guess.

After the first six motos, it was surely a valid question. His fiercest rival, defending champ Jonass, had won the first three Grands Prix and held a commanding lead. It looked to be more of the same with Jonass in strong form. In recent weeks, however, Prado has found the pace and the points deficit has slowly come back to him. Going into Ottobiano, the big question was, “Can Prado withstand the heat?”

Remember, this very race left him sidelined for the second moto, and winning titles usually requires participation. Well, Prado answered the bell with a 2-1 finish this past weekend and now finds himself only nine points behind Jonass. It was a clear signal to the rest of the field that he is a new man for 2018.

For Cairoli, he is 32 years old and is more than battle-tested. He knows when to push and when to exercise caution. Cairoli might be on his best form ever, punishing the rest of the field except one (more on that later). The level that Cairoli has achieved, let alone at 32, is one of the highest we have ever witnessed. His continuity with de Carli KTM, his dedication to his craft, and his ability to elevate his skill set are all part of Cairoli’s equation. He is simply more polished than most of the riders he has ever faced. Further, he has been KTM’s primary focus the past several years, and for good reason, too. He has brought title after title to the Austrian powerhouse, putting the brand at the forefront of MXGP racing. Even with Jeffrey Herlings’ MX2 performances over the last few years, it was still all about Cairoli. In 2018, that dynamic is shifting, bringing drama and tension with it.

For Red Bull KTM proper, they are the in-house factory effort. Their lineup of MX2 champ Jonass and wunderkind Herlings alone (not to mention Prado and Cairoli) would have any team green with envy. The 1-2 punch rivals the de Carli KTM duo in every way. Speed, equipment, and, most importantly, ambition are in abundance.

Team leader Jeffrey Herlings’ confidence and self-realized talent rub some the wrong way. He has been a global star since he was 15 years old. That spotlight at such an early age presented challenges in maturity, resulting in ill-timed mistakes and injuries. He left championships on the table, but even in defeat, everyone knew he was the best in class and destined for greatness. That incredibly high level of potential is being fully realized in 2018, which says a lot for a rider with world championships already to his name.

Going into Ottobiano, Herlings held a 62-point lead over Cairoli. Yes—inexplicably, the young Dutchman had put 62 points into the defending champ by the halfway point. Whether or not you were on the Herlings side or the Cairoli side of the paddock, it’s unlikely you could have predicted that lead without injury. Then, just as Herlings looked to be putting a finishing move on the MXGP field, disaster struck. On Wednesday before Italy’s GP, Herlings crashed while practicing and suffered a broken collarbone. His lead would undoubtedly be reduced and re-open the championship fight. Just how that injury affects future rounds is yet to be seen, but for Cairoli, he maximized his opportunity in Italy. He cut the lead to 12 with a 1-1 score as the series enters a weekend off. Next up is Indonesia on July 1 and a lot of questions to be answered. No one, not even Jeffrey, can be sure of how the next two rounds will shake out. That’s the series landscape in a nutshell, but there is so much more underneath the surface. It’s more than just racing; it’s a battle for brand favor.

Having so many superstars under one global umbrella has created more than its share of tension. De Carli’s factory KTM effort versus Red Bull KTM proper may sound strange, but it’s very much reality. To say they are pure competitors is not a fair representation of the situation, but to think they are not in fierce competition would be naïve. MX2 has Prado versus Jonass and MXGP has the infamous Herlings/Cairoli war seeing new life. There is a battle on and off the track. Being the top KTM team is taken seriously, and Cairoli remaining the KTM leader is also taken seriously. Conversely, Herlings has shown that the future is his. His incredible pace has taken the series by storm, stomping the field more than once, but what some would call an unsustainable pace has also put him on the sidelines. It’s a slippery slope, Herlings’ pace. Big risk, big reward, with a world title hanging in the balance.

Cairoli is the old lion on his established world championship-winning team. Now he brings up the Spaniard Prado, assuring the continuation of de Carli’s relevance. Herlings and Jonass are the friendly foes just one tent away, ill intentions on all sides but tempered by the shared orange glow that overshadows the entire situation. It’s the strangest of dynamics, made even more incredible that it’s occurring in both classes.

How this shakes out is anyone’s guess. We already saw friendly fire in Matterley Basin. Herlings and Cairoli’s collision put the champ down to manage a lingering knee injury. Now it’s Herlings who must fight through the pain, as the next rounds will be impossibly tough. Not only will he be dealing with a freshly plated collarbone, but he has injured ribs to cope with as well. Couple that with a 24-hour flight to Indonesia, the 100-plus-degree temperatures waiting there, and a rejuvenated Cairoli. Stormy horizon, indeed. Luckily for Herlings, he can count on his teammate/fiercest opponent to take it easy on him, right? After all, what else are teammates for?