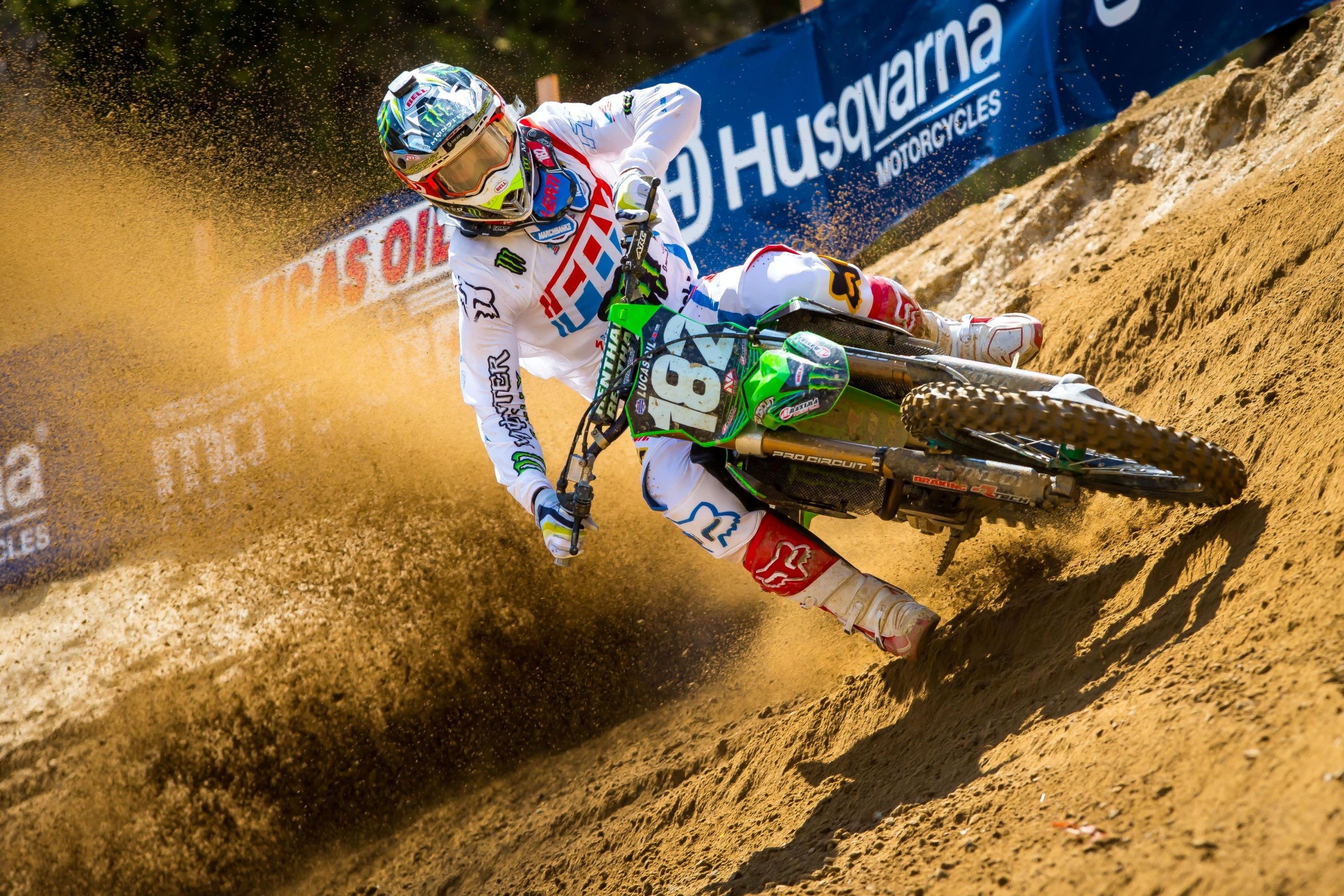 Insight Style Versus Technique for Dummies

Disclaimer: Racers, fans, and keyboard warriors alike, don’t let this article hurt your feelings. Do not mistake my blunt statements/facts for arrogance—or do. Racers, you may not like the honesty here. Fans, you may not agree with or understand my point of view, as you were not the one out there on the battlefield. Keyboard warriors, well, there’s nothing I can tell you that you don’t already know, right?

Sitting on my comfortable couch and watching the first couple rounds take place, I’m jealous I’m not out there racing, but it is kind of nice to just watch after 17 straight supercross rounds. Props to the 450 guys who finished supercross and headed straight into 12 Lucas Oil Pro Motocross rounds. It’s insanity.

Anyway, while watching round one at Hangtown, I made an observation and posted it on Facebook. My observation was that the rookie Garrett Marchbanks, while obviously extremely fast, has a lot of fairly major flaws in his technique. I stated that he needed to fix them fast, because riding at such a high level of speed with that many flaws in technique is a dangerous combination.

Holy cow, did I receive some flak for that one, and I’m probably going to receive even more now. Responses like, “That’s easy to say when you’re sitting on the couch” and “he can still smoke you.” All of which, yes, are true. Garrett is faster than me, no question about it. But here’s where the comments started grinding my gears. Another pro rider (I hope he reads this) stated that technique doesn’t matter when you’re going that fast, everyone has their own style, who cares if he rides on the edge, then threw in the fact that I came off as arrogant just as a cherry on top. This comment was so incredibly wrong, I could not even bring myself to argue it. Yet a handful of people agreed with him and attempted to back up his point of view, which is what brings me here.

I will go more in depth on Marchbanks’ specific issue along with other riders, but let’s start simple here. The first confusion seems to be the difference between style and technique. Let me explain.

Technique: Technique is the foundation of everything you do on a motorcycle. It all begins with the proper “attack” position, from your feet all the way up to your head. Without a strong attack position, progressing in other areas of your riding is going to become increasingly difficult and dangerous. Technique is also how your brake, accelerate, turn, and jump. There are baseline techniques that you would use in 90 percent of situations (techniques that I teach at all of my academies—sign up today at ajcatanzaro.com). Obviously, at a pro level, there are many situations that arise that would be “exceptions to the rule,” but for the most part as a rider, you will always stick to the basics. There are no secrets that the pros have that any rider at any level can learn; the top pros just eat, sleep, and breathe it. It becomes something they can do subconsciously without having to have constant, conscious thoughts on what to do. Examples of proper technique would be riding on the balls of your feet, toes pointed in, knees behind your footpegs while standing, hips unlocked, elbows up (especially the inside elbow in turns), proper wheel chatter while braking, utilizing the front brake in turns to guide the front wheel in a rut, etc.

These techniques are non-negotiable. There are not different ways of doing it that are better. Altering these non-negotiables is not “style;” it is a flaw in your technique as rider.

Every single rider I can think of who has won a premier class championship had extremely good technique. Jeremy McGrath, Ricky Carmichael, Ryan Villopoto, Ryan Dungey, Eli Tomac, Ken Roczen. Sure, they all have their own style, but I can’t think of any major flaws in these riders’ technique.

Style: Style is the little twist that each individual has in their riding. Everyone has their own style to a certain extent, with examples off the top of my head being:

The list can go on and on. These examples are of riders who are extremely technically sound. Their style for the most part is not affecting the principal techniques. I would never criticize or bag on someone’s own style, as long as it does not interfere with the technique.

Now here’s the middle ground where things can get a little fuzzy, but I’ll tell you my opinion. As I write this article I can’t help but to think of some examples that could be debatable.

Zach Osborne: Zach, help me out here. How does that bike turn with you sitting that far back on the seat? Obviously it is intentional on his end, and I assume bike setup is critical for this to work. Tyla Rattray would ride the same way. I don’t understand it, and the jury is out on this one for me.

Justin Barcia: Barcia is one of the first people who come to mind. How much of what Justin does is style and how much is improper technique? The scrubbing, whipping, revving is one thing, and I would categorize it as style; however, the clutch abuse in turns is a technique flaw. Feathering the clutch to that extent in a turn will disrupt the lean angle of the bike. When you pull the clutch in, the bike will dip, and when you let it out, the bike will stand up. There’s a time and a place for it, but Justin takes it too far a lot of the time. I’m confident that riding coaches have tried to work on this with him, and he has tamed it down a bit, but is not perfect. The argument here could be, “Well, he’s won races, championships, and is a top rider, so it must be working!” Has he won a 450 title? Is he perfect as a rider? No, he hasn’t, and no he is not. Just like everyone out there, he has places where he can improve.

Barcia is by no means the only rider who has noticeable technique flaws. Here are some others to keep an eye on next time you see them ride:

Cooper Webb: Watch his feet. He tends to ride more on his arches with his toes pointed out. There’s no advantage to doing this, I just assume it’s a bad habit that he has struggled to get rid of.

Austin Forkner: He has a tendency to push the bike down under him in corners rather than lean with it. This is caused by the outside elbow dropping and creating a twisting motion. Unless you’re in a flat turn with no rut, you always want to be centered with the bike and its lean angle.

Garrett Marchbanks: The inspiration behind this article. Let me start by saying I don’t know Garrett super well personally, I trained him a couple days at Club MX and watched him ride for a few years there on 85s. He’s amazingly fast and confident on a motorcycle and is an extremely hard worker. He would be out there riding after everyone was done for the day, putting in motos all by himself while Nicoletti, Alex Martin, and myself were flicking on the Xbox and playing some MX vs. ATV Reflex. (Or maybe Troll was deep in the mountain bike trails with a shovel and a rake doing God-knows-what). Anyway, I did not notice any major flaws in Garrett’s technique back then, but he was also six inches shorter than he is now.

Watching Garrett around the 20-minute mark in the broadcast of 250 moto two, it is immediately obvious that something is wrong. Here’s what I see:

His hips are locked. What I mean by this is that his hips are driven forward with his butt tucked under, giving him a rolled back. The problem with locked hips is that it essentially connects your lower half to your upper body. This causes any movement at your feet to be felt all the way up to your head. Locked hips also will drive everything forward from your waist down, bringing your knees forward and your feet forward on the pegs. This is a bad place to be, as all your body weight will now be over the front of the bike. Fundamentally, this is one the biggest things you can do wrong, and it will cause the most problems in your riding.

I would be surprised if this issue wasn’t already recognized by his team and he has begun working on it. When he perfects his technique after having this growth spurt, I believe he will be at the absolute top of the sport a couple years down the road.

250 riders who have picture-perfect technique, just to name a few:

450 riders who have picture-perfect technique, to name a few:

Am I perfect on a bike? Absolutely not. Can I recognize every little thing that happens when someone is riding? Yes, as should anyone at the top pro level. The first step to fixing these issues is to recognize them. As you learn to recognize these issues in other riders, it will make it easier to put your finger on a problem that you are having. Rather than getting up off the dirt after a crash and wondering what the heck just happened, you can know exactly what caused the crash in the first place and can try not to make that mistake the next go around.

I hope I shed some light on this topic, or maybe I just confused you all a little bit more.