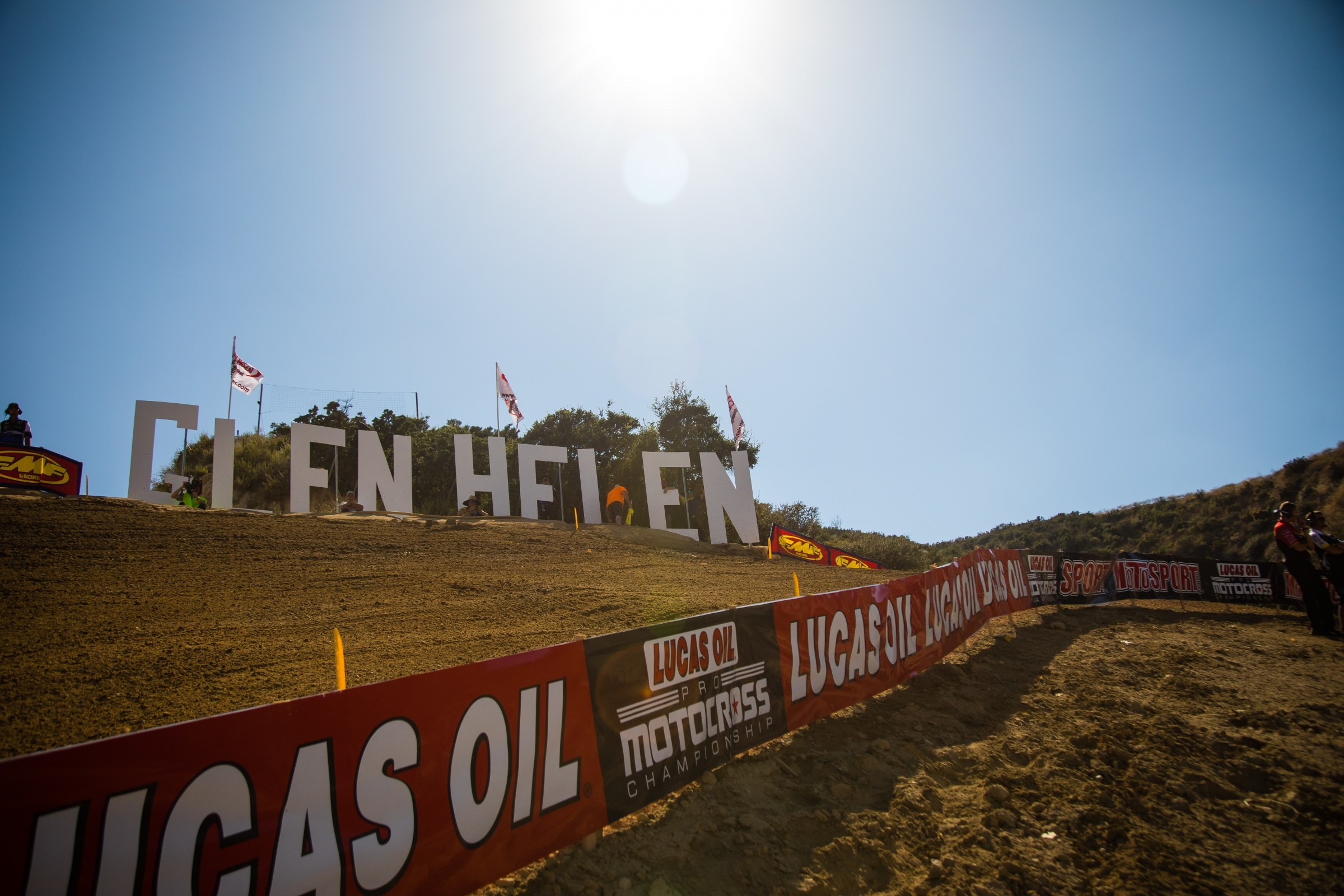 Round two heads to the mecca of the motocross world: Southern California. Glen Helen is one of the most famous tracks on earth and where you can find the motocross elite riding every Thursday morning throughout the summer (those who choose to stay in Cali, that is). It’s also one of the most demanding tracks I have ever ridden. The incredible elevation changes coupled with some of the series’ biggest jumps create a course that has all of the riders a bit nervous on Saturday. It also boasts the fastest start of the season and quite possibly the only section of the year where bikes will hit their absolute top speed. In short, Glen Helen is a track of extremes.

Luckily, this year won’t see an extreme on the thermometer. The forecast is calling for mid-seventies on Saturday, which will is a win for everyone. I have raced this event when it was up near 105 degrees, and trust me, that was not a fun afternoon for anyone in attendance. Riders, fans, and industry personnel alike can all appreciate a beautiful Memorial Day weekend. More importantly, the heat won’t impact the riders and increase the danger level on an already tough-to-manage track.

Last year, this race flipped the 450 title upside-down. Eli Tomac’s front brake issue cost him a boatload of points and handed the red plate to rival Marvin Musquin. This hasn’t been Eli’s best track in recent years, so he might be vulnerable. A 1-1 here would be a huge step forward from where he sat in 2017. The best way to stave off any vulnerability is with a huge points lead. Finding that balance between aggressive and too aggressive, patience and too much patience… that’s the secret sauce.

For those of you who have never been, southern California is moto mania. Dirt bikes are part of the mainstream vernacular compared to most of the U.S. If a resident doesn’t actually ride moto or off-road themselves, they definitely know someone who does. It’s one of my favorite aspects of SoCal. Motocross is much more familiar to the commoner than anywhere else on earth. That is why we have two Anaheim rounds (used to be three) and why Glen Helen is such a huge race. The turnout is always massive, and the industry is on hand, too.

Is Jason Anderson “all in” on this outdoor season?

Eli Tomac hasn’t won a moto at Glen Helen since 2015. Will he snap the streak?

Zach Osborne won the 2017 Glen Helen overall with 4-2 scores, but wasn’t as dominant as he was at Hangtown. How does 2018 shake out?

Monster Energy/Pro Circuit Kawasaki had a rough Hangtown. Who bounces back?

How much progress can Kenny make in a week?

Will Blake look like the red plate-holding Blake or the Hangtown Blake?

Will cooler heads prevail on the enormous jumps planned for Saturday?

Eli Tomac put in a few laps in that second moto that had to boggle Marvin’s mind.

Zach Osborne controlled both motos without too much fuss.

Justin Barcia’s 3-3 wasn’t optically what he wanted (35 seconds down in the first moto and 24 seconds for the second), but a podium is still legit.

Justin Cooper didn’t finish the motos how he would have liked, but he ran up front and showed serious speed.

Justin Hill’s 16-13 wasn’t his best day, but I have a feeling that Anaheim is already on his mind.

Joey Savatgy looked great in practice, battling for pole position all morning. That didn’t translate into a good result, though, leaving him 24 points out of the title chase already.

Austin Forkner had some sort of discomfort going on in that second moto, forcing him to pull off. As a preseason title contender, an 18-point day hurts.

Jason Anderson just won a supercross title, and I personally don’t think Hangtown was circled as a priority for the last month or two. I don’t blame him a bit for that, either. Let’s see how things look in a few weeks before we draw any conclusions on his summer. He only lands here because his second moto was a bit rough at the end.

One of Mitch Payton’s bikes holeshots the first moto.

Blake Baggett is a factor somehow, some way.

There is at least one section on the track that has every rider at full pucker.

My poolside beverages are ice-cold during each gate drop.

Jody and the track crew add a section of hot coals, the Snake River Gorge jump, a ring of fire, a crocodile pit, one Russian bear trap, and replace the flaggers with snake charmers and exchange promo girls for bearded ladies.