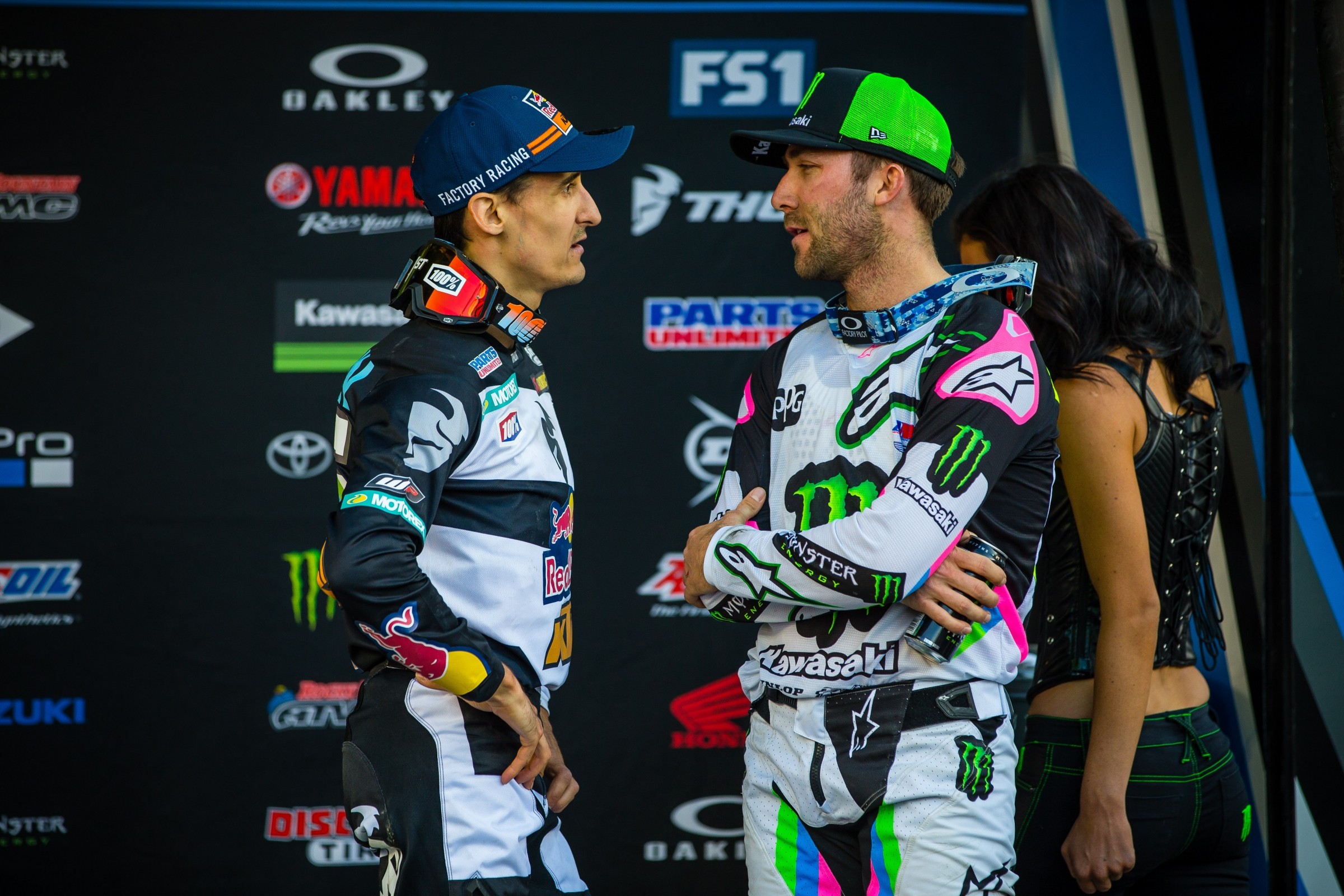 3 on 3 What’s Your Take on Tomac/Musquin?

Only one question here this week. What’s your take on Tomac/Musquin? Here are David Pingree and Ryan Sipes with their answers. You can read Jason Thomas’ answer to this question in this week’s Breakdown column here.

David Pingree: There isn’t a clear-cut, black-and-white answer on the Great Musquin/Tomac Incident of 2018. There are a few factors that played into the drama. First, the corner markers left the turn wide open. I’ve heard some folks, including guys like David Bailey, whom I really respect, say that the turn shouldn’t have been left that open. However, I’ve been preaching for a long time they need to open the corner markers up like this so we have more block passing! Oh, the irony!

These type of incidents are common place in arenacross because the corners are so tight and left open like this. My buddy Chad Pederson got knocked out once by going head-on with a guy entering the turn while he was exiting. Now THAT’S close racing. Another factor was the rutted conditions. If the turn wasn’t completely lined with ruts, Eli would have probably covered the inside a little better. Tomac chose the furthest inside line, but it initiated at the center of the turn and then cut down so riders could jump the section out of the turn—this left the door wide open. Finally, Marvin isn’t known for his overly aggressive/dirty riding, so this came way out of left field for Eli. If Jason Anderson had been right on his bumper, Eli might have protected that inside a little more.

All of that makes this gray area when discussing who was right and who was wrong. The bottom line is that a 450 supercross win was on the line and Musquin saw an opening. It looked rough and it sucks that Eli fell, but I think Tomac would have done the same thing in that situation. This pass won’t come without repercussions for Marvin, and I’m not sure he thought that through all the way. These two guys still have a few years left to battle for wins and Tomac is going to even the score at some point, if not every chance he gets until the day he retires. In that sense, this win could cost Marvin several other victories over the next few years. Still, as a pundit, I can’t be mad at Musquin for doing everything he can to win, especially when his move worked. Love it or hate it, the record book and Marvin’s checkbook both show another win for Musquin.

Ryan Sipes: This is tricky territory. I can see it from both sides. Musquin led the entire race only to get passed with a lap to go. He was frustrated and wanted to get Tomac back before the finish. You have to imagine he’s thinking, “I’m always nice. I need to be aggressive here and take what I believe is mine.” It was probably not the best place to try that move, considering how tight they were all cutting down in that corner, but in the heat of the moment, you don’t have five minutes to plan a pass. You react on instinct, regardless if that instinct is right or wrong. He chose to go for it and it worked out for him. Be that as it may….

Tomac sat behind Musquin the whole race. He got close a few times, lost touch a few times, and ate a ton of dirt for 21 laps. Watching from home, it looked to me like Tomac had settled for second. He had dropped off Musquin’s wheel and didn’t look like he had anything going for him. But when Marvin made that mistake, Eli saw his chance. In a brilliant move, he got out of the main line and went outside before the whoops, allowing him to get a huge drive and make the pass for the lead. Now he had to protect his inside line, right? He did take the most inside line he could. From that point of view, Marvin is the bad guy here.

Now that I’ve seen it a few times on replay (which makes me an expert….), Tomac did cut down super tight. With someone that close, it wasn’t a smart move; on the sheer chance that Marv went for it, Eli was screwed. His only safe option was to enter on the inside, cross all the ruts that were cutting down, and hit the highest part of the berm to make his turn. Not easy, and not a normal strategy in the 450 class. That’s a 250 class move because you know there’s some young idiot behind you ready to clean your clock. Nonetheless, Eli might think about that next time there’s someone on his six.

So was Tomac wrong, or was it Musquin? To me, this was a little of both. Marvin shouldn’t have went for it in that corner, and Eli probably shouldn’t have cut down so tight. They are both wrong! Having said that, I don’t want to see this become the norm. Marv, I think you’re awesome and I consider you a friend, but I’d rather see you outsmart them to win than what happened here.