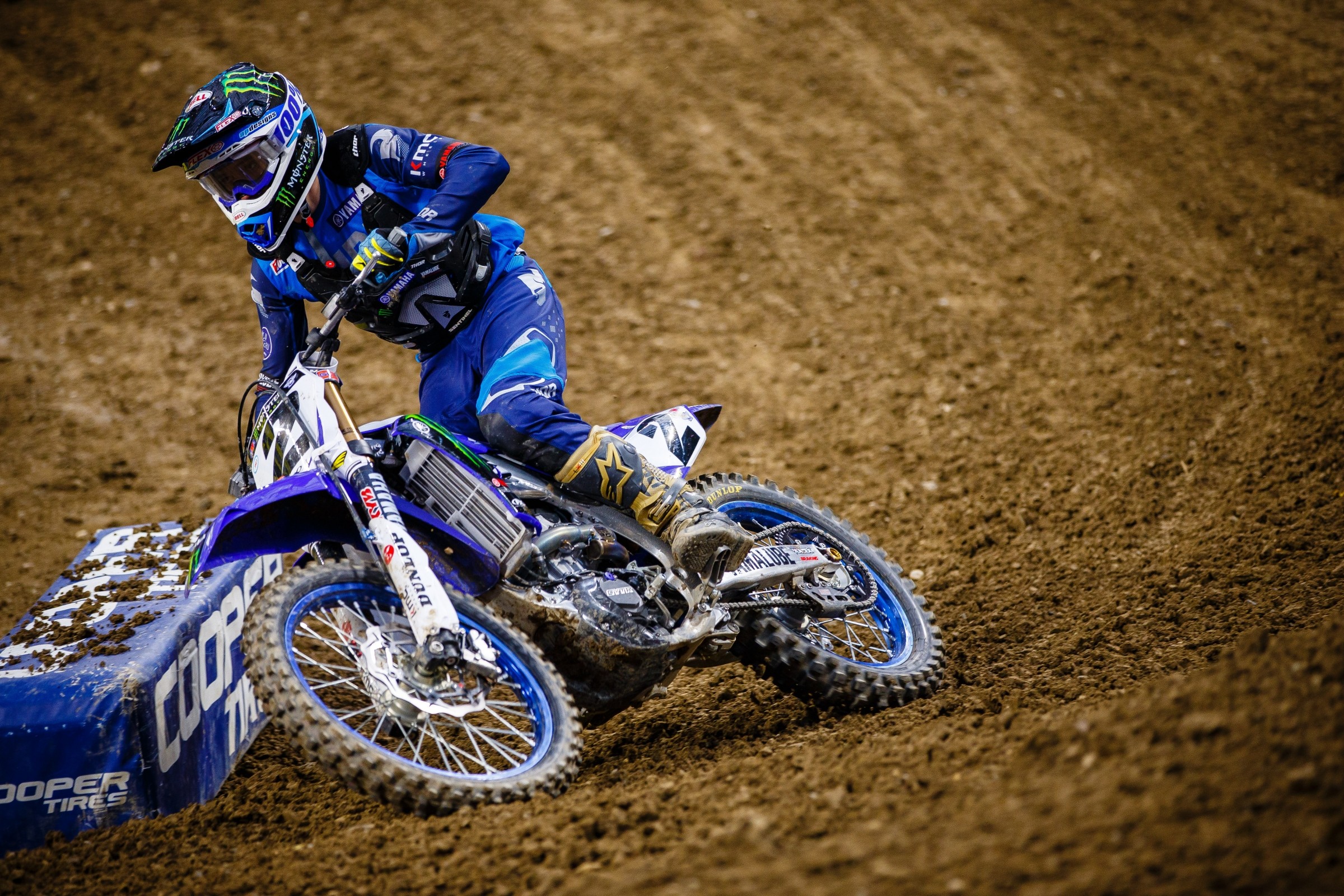 Comment: Bisceglia is hoping to make it back for the final two races after breaking his hand in Atlanta.

Comment: Bogle is looking at a return for the Lucas Oil Pro Motocross Championship. He’s currently recovering from a broken humerus and small fracture in his L2 vertebrae suffered in San Diego.

Comment: Adam Enticknap sustained a broken collarbone in Minneapolis. He’s out for this weekend.

Comment: Enticknap is healing up after being sidelined with a broken pelvis. He won’t be back for any remaining rounds of Monster Energy Supercross.

Comment: Grant will miss Foxborough due to a fractured leg sustained in Arlington. A timetable on his return is unavailable—the team has not replied to our requests for an update.

[Update: Grant is expected back for Lucas Oil Pro Motocross.]

Comment: Martinez is out for the remainder of supercross with a split depression plateau fracture of his tibia.

Comment: Noren won’t be racing for the rest of the year due to a torn ligament in his hand and some nagging problems with his knee.

Comment: Roczen is back on the bike after shattering his hand, dislocating metacarpals, and tearing ligaments in his hand in San Diego. He’s eyeing a return to racing for the Lucas Oil Pro Motocross Championship.

Comment: Tapia underwent surgery after sustaining a broken pelvis, fractures to his L3 and L4 vertebrae, and internal bleeding in Indianapolis. In case you haven’t heard, surgery and hospital time is expensive so go help him out by clicking here.

Comment: Webb was involved in a crash in Minneapolis that left him with a fractured tibia. He’s out for the rest of the supercross season, and as of now, a timetable on his return is yet to be announced.

Little update for you guys. Lastnight in Minneapolis I was involved with some carnage in the rhythm section right off the start and I ended up getting landed on in the 1st main event of the night. I ended up with a fractured tibia as of now. Have an appointment Monday with an ortho to see the final word. Extremely bummed to say the least... but I do know it's hard to beat someone who won't give up. I'll be back soon #GodsPlan Thank you to all my sponsors and people in my corner for the uplifting. @yamahamotorusa @monsterenergy @thormxofficial @bell_powersports @ride100percent @alpinestars @toyotaescondido @swanie387 @seth_rarick @teamdrg @jakevanada @trentwebb175 #hutch

Comment: Weimer is working toward being back for the final pair of races. He’s currently recovering from a broken wrist and two broken metacarpals in his hand suffered in San Diego.

Comment: Davalos has been fighting issues all season that stemmed from a crash in Arlington, namely an injured knee, herniated disc, and fractured C7 vertebrae. He recently underwent surgery to repair his knee. There is no timetable on his return.

Comment: Decotis crashed hard in Daytona and fractured ribs and vertebrae. He’s expected to start riding again in May.

Comment: Ferrandis is working on being ready for Lucas Oil Pro Motocross after being sidelined in Atlanta with a broken arm and a few teeth.

Comment: In Minneapolis Forkner sustained what is suspected to be a broken collarbone. At time of posting we were still waiting on an update from his team. Either way, he’s out for Foxborough.

[Update: Forkner is expected back for Lucas Oil Pro Motocross.]

Each pic pretty much describes how my mains went last night. Pretty bummed about my riding in the second and third mains, just think I was being impatient in the second one which caused more mistakes and then ended the night in that third one. Pretty sure just a broken collarbone from what I’ve been told as of right now which is pretty much what I felt as soon as I crashed. It’s not from a lack of effort just doesn’t go ur way sometimes, but I guess I’ll see u guys in outdoors.

Comment: McAdoo will return “a few races into” Lucas Oil Pro Motocross after reinjuring a fractured hand sustained in Arlington.

Comment: Peters crashed on a patch of ice in Minneapolis outside the stadium and injured his knee. He traveled back to the JGRMX headquarters in Huntersville, North Carolina, on Sunday for evaluation. It was determined that the Suzuki RM-Z250 rider tore the ACL and MCL in his left knee. Currently sixth in 250SX East Championship point standings, Peters will attempt to race the penultimate round of the series this weekend in Foxborough, Massachusetts. Depending on how he’s feeling, Peters will also contest the Las Vegas Supercross finale before undergoing surgery to repair the ligament.