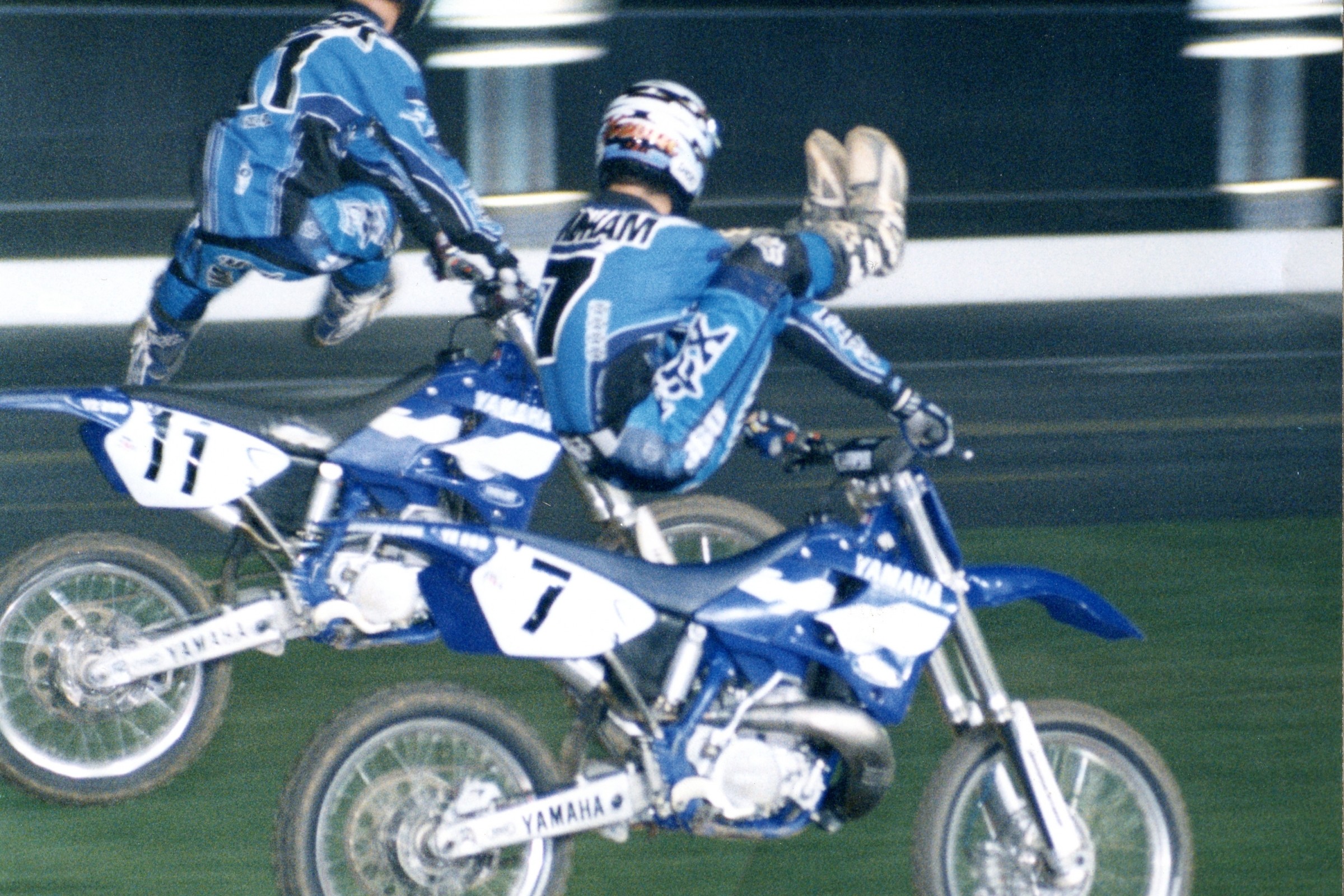 On This Day in Moto April 19

On a wild night on the infield of Charlotte Motor Speedway, Team Yamaha's Kevin Windham, the points leader in the 125cc West Region, jumped on a YZ250 and scored his first 250 class win in AMA Supercross. In doing so, Windham became the first rider in the 12-year history of the 125 class in supercross to win in a cameo ride in the premier class. His teammate Ezra Lusk finished second, as the teammates reversed their finishing order from the previous week at Pontiac. Windham was pretty much alone out front the whole way, though Lusk would close in on him as the five extra laps he was doing (compared to 15-lap 125 mains) started to catch up with K-Dub.

In the big scheme of things, the race was also something of a win for series points leader Jeff Emig, of Team Kawasaki, who finished fourth behind the Yamahas and third-place Greg Albertyn of Team Suzuki. Emig was just two points ahead of Suzuki's Jeremy McGrath going into Charlotte, the third-to-last round of the series. McGrath was in second, six seconds behind at the halfway point and closing on Windham, when he punctured a tire.

"There was nothing I could do," he told Cycle News' Kit Palmer afterward. "I can't believe it. I was riding pretty good, flowing, pulling a little bit on Lusk. I was going to work on Windham—I mean, he wasn't that far ahead of me. Maybe I could have reeled him in."

McGrath would instead slip to seventh by the end, allowing Emig to pick up four points rather than lose the points lead, which seemed the likely outcome before Jeremy's bad luck.

The 125 class in Charlotte was won by Splitfire/Pro Circuit Kawasaki's Ricky Carmichael, his third win of his rookie season. But crashes at other events cost RC the championship, which went instead to Suzuki's Tim Ferry, his fellow Floridian. Ferry, who finished third in Charlotte behind RC and Honda of Troy's Stephane Roncada, did not win a single round on his way to the title.

One other thing about that night in Charlotte more than 20 years ago: Cycle News contributing photographer Steve Bruhn, who called himself TFS ("the factory spectator"), shot a celebration lap image of Windham and Lusk with the new digital camera he was fooling around with. The image turned out really well and would find a place in motocross journalism history as the first digital photo to be widely printed in magazines all over the world, including Racer X (which was still a newspaper back then). It was like a public announcement that a revolution was coming in photography, just as there was one on the same horizon that was Doug Henry's YZM 400 four-stroke motorcycle that he would ride in a fortnight in Las Vegas. While no one knew it at the time, TFS' shot was a precursor to the doom that was coming for 35mm film cameras.

But the Lites class was where the real action was in St. Louis, as GEICO Honda's Trey Canard and Monster Energy/Pro Circuit Kawasaki's Ryan Villopoto would settle the East Region title. Three points separated the rookie Canard, who won the first three rounds of the series, and the late-charging Villopoto, who grabbed the next three wins. St. Louis would be a winner-take-all race, because if RV won and Canard was second, the tie-breaker would go to Villopoto based on him having the most wins. How did it turn out?