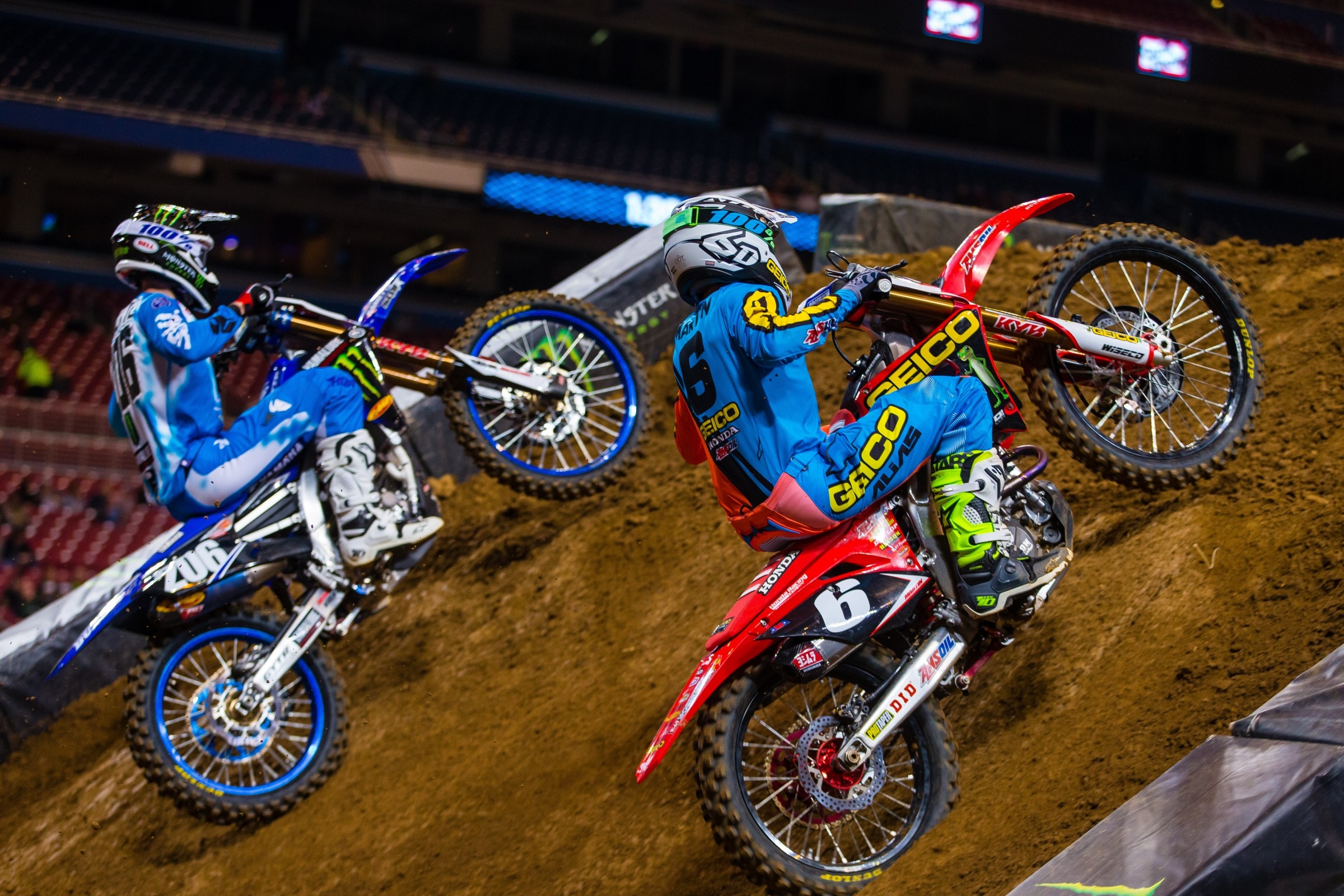 Brrrrr…. While most of the country is rolling into springtime, Minneapolis is facing another snowy weekend. While the weather outside will be frightful, the weather inside will be delightful. The US Bank Stadium might be my favorite venue of the season after debuting last year. The attention to detail and sheer magnitude is simply next-level. It’s a great home to supercross and a round of the series I truly look forward to.

The start this week is fairly short and goes into a 180 left. Riders will be bunched up going into the left, but the 180 will hopefully help with the pileup issues. Right out of the turn, there is a rhythm section that could be important. On normal laps, the ideal line will be to triple out of the turn, triple again, and single into the turn. Similar to St. Louis’ second rhythm section, if riders can’t pull the triple, the secondary option will be much slower. Look for this to be a section that riders spend time perfecting in practice.

A bowl berm ends that first section, and if possible, riders will triple out of the berm. If not possible, either wheel-tapping the middle jump or simply doubling the first two isn’t the worst option. That leads to a standard supercross triple that everyone will want to scrub with all of that speed created in the previous section. The landing of the triple leads to a 90-degree right-hand turn and immediately into another rhythm section. There is an inside/outside option, but they both utilize the same concepts. The outside will be a step-on/step-off while the inside will be a tabletop to single. Both options end in a double into another 90-degree right-hand turn.

The next rhythm section is the most difficult of the Minneapolis layout and will take some bravery and lots of talent to execute. The absolute fastest option would be to rail the outside of the 90-degree turn and triple onto the tabletop, step onto the next tabletop, and step off over the next single. A triple step-up is next, and a small double would finish the section. That’s the fastest line on paper, but just like we saw in Arlington, that doesn’t always equal the most practical line. If that outside triple on is too tough, too rutty, or isn’t built to jump, the inside will be the only option. Riders would most likely double, then jump from the takeoff of the first tabletop, land on the flat part of the second tabletop, and  step over the next single. The final 3-2 would be the same in either scenario. Watch for riders to swing wide in practice to eye up the faster option. This section is similar to both Arlington and Glendale, but it only worked consistently in Glendale. How will Minneapolis’ rendition play out?

A 90-degree left leads to the finish line jump and immediately into another bowl berm to the right. A sandy straightaway is up next, and riders will work to veer back to the right side by the time they reach the next left-hand 90. That right-side positioning will allow them to sweep through the flat turn and carry speed into the second supercross triple. Landing from that triple, riders fire into the first of two back-to-back whoops sections. This first section will be a test of who is willing to carry speed and who isn’t. A following rider can swing to the left and blitz up the inside, setting up a block pass in the next berm. The second whoops section is a bit longer and leads into a bowl berm back onto the start straight. With two whoops sections and bowl berms following both, look for aggressive moves all night here.

Which way will the 250 East momentum pendulum swing?

How much purple can Ryan Dungey conjure up for his Saturday opening ceremonies ovation outfit?

Eli won his sixth main event of the season, and if he stays off the ground, he could win all the way to Vegas.

Aaron Plessinger gets a couple of weeks off after a win and extending his points lead to 17.

Broc Tickle put in another good ride and is finally seeing results after a tough first half of the season.

Chad Reed rode the entire main event in fifth position until a last-lap pass by Cooper Webb and an overheated engine led to a seventh. It was still his best finish of the season.

The 250 privateers took full advantage of the Seattle mud, with many first-time main event riders making the big show.

Chad Reed’s engine was very hot at the end of the Seattle main event.

The Midwest is still stuck in mid-winter form. With snow and temperatures in the 20s forecasted, spring can’t come quickly enough.

Global warming takes full effect, with temps in the 20s and heavy snow in April.

Ryan Dungey returns to Minneapolis to see his hometown fans and is super pumped to be there. He would also like to thank his sponsors for making it all possible.

Jeff Emig sports a “standing on the pegs” butt patch on his broadcast suit for Minneapolis.

Justin Barcia welcomes himself back to supercross by T-boning someone in the first heat race.