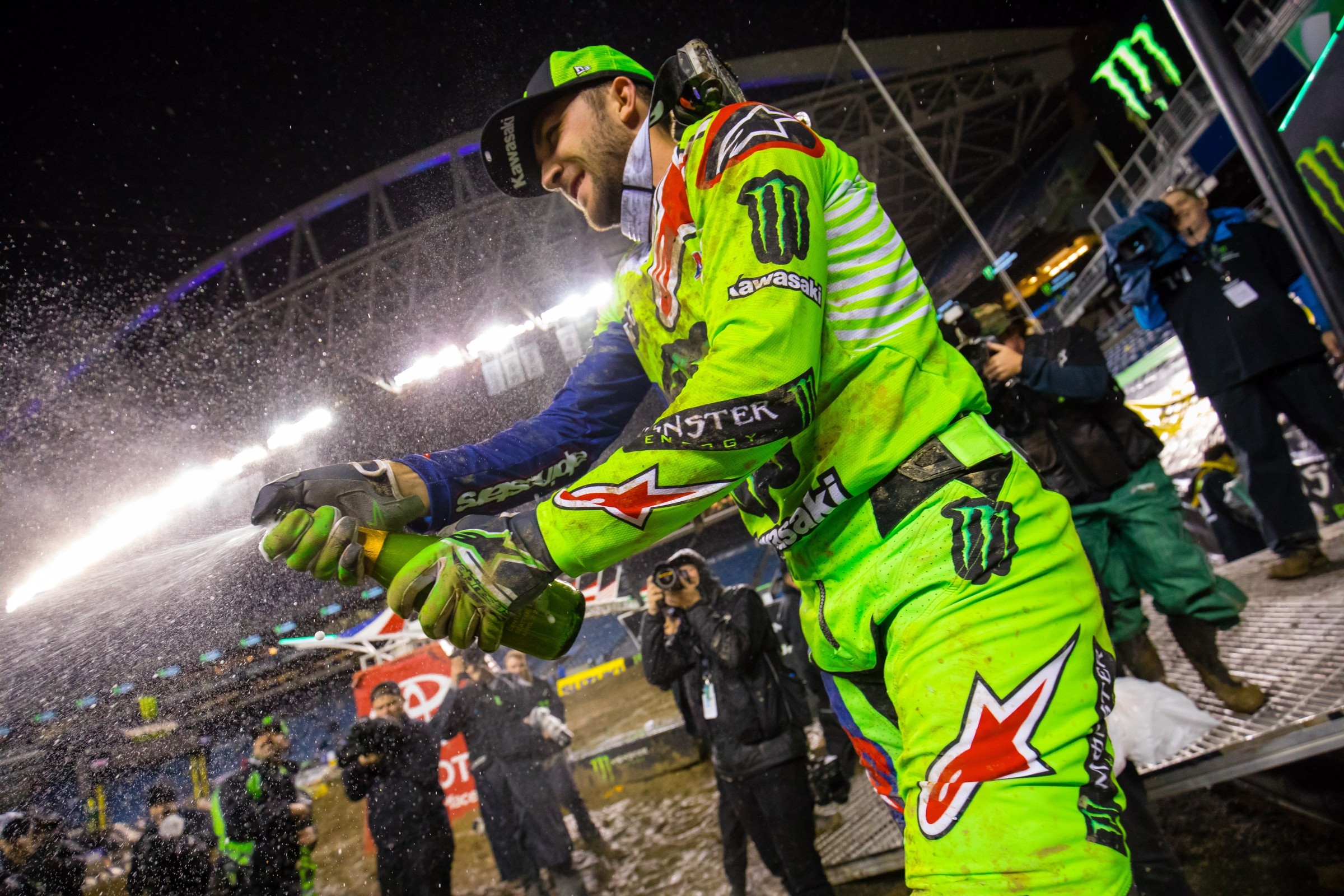 Disclaimer: Racers, fans, and keyboard warriors alike, don’t let this article hurt your feelings. Racers, you may not like the honesty here. Fans, you may not agree with or understand my point of view, as you were not the one out there on the battlefield. Keyboard warriors, well, there’s nothing I can tell you that you don’t already know, right? I have to go through the LCQ to get to the main event—what do I really know?

Let’s start with the track. Why does a stadium that doesn’t have a roof exist in Seattle? This boggles my mind. As you can guess, we had mud—some of the worst mud I’ve ever seen. This mud was sticky, it was deep, yet still extremely greasy on top because of the rain that never stopped. This made for impossible track conditions. On the track walk, I overhead riders talking about tripling this and tripling onto this. I couldn’t help but giggle to myself. I was busy scouting out what the most efficient way to roll the jumps would be! I approached my Rockwell Racing teammate and told him the fastest qualifier would come from the 250 B Group qualifier, as that group went out first. He shrugged it off, but wouldn’t you know it, Brandan Leith would go on to qualify first overall! I’m sure the factory teams weren’t too pleased that the B group went out first; however, it’s only fair that the privateers have the edge every once in a while. Props to Brandan and the other B group riders who took advantage of that opportunity given to them.

What was my game plan, you ask?

First thing on the list was “preserve the bike.” I own my race bike; I bought that thing with my hard-earned money, and it pained me to put it through that. Blowing my bike up would probably equal the end of the season for me, so that wasn’t an option. The goal was to ride in a low gear and use as little clutch as possible combined with low RPMs. I started off the gate in second gear, just like normal, and would shift to third down the start straight just like normal. Once I reached the first corner, I shifted down to first gear, and that’s where that bike would stay the rest of the moto. Never once did I shift out of first. Insane to think about.

In the LCQ, I was engaged in a slow-speed battle with Alex Ray. It sounded and looked like he was doing a million miles an hour. He was bouncing from one side of the track to the next with his bike held WIDE OPEN. Meanwhile, I was riding next to him, standing up, picking lines with precision, almost treating the track like I was in an enduro race. I couldn’t hear my bike over his. He would blow by me in one section, only to make a huge mistake in the next and let me by. A true “Tortoise and the Hare” story. Who came out on top of that battle? Me! Why? Because he smoked his clutch!

Each time after exiting the track, my mechanic would tell me that my bike was the only bike on the track that wasn’t pouring white smoke. Goal number one accomplished. Let’s hope that the person buying my bike in a couple months didn’t watch Seattle SX 2018....

Speaking of bikes, if I could have chosen any bike in the world for that race, do you know what it would have been? My uncle’s 1992 KDX200. Best bike I’ve ever ridden, and I guarantee I would have been faster on that tank. Could you imagine seeing that? Talk about entertainment!

Goal number two for me on the night: I called this the “turtle technique.” The turtle technique consisted of me riding extremely slow/steady while hoping for maximum carnage in front of me. This technique relied heavily on everyone else over riding the track, which is typically a common occurrence. I turtled myself to a sixth-place finish in the LCQ, missing the main by two spots. Unfortunately, no one really crashed in front of me, and I made the mistake of going full turtle. You should never go full turtle. Lesson learned.

Side note: I never jumped a double the entire day. I can safely say that’s the first supercross track I’ve raced where I didn’t do a double jump. In fact, I don’t think both of my wheels simultaneously left the ground the whole day....

Goal number three: Don’t crash. I may have been the only person who showed up to that race and didn’t hit the ground a single time—I would bet money that that is the truth. (Riders, call me out if you didn’t crash, because that’s impressive!) I’m proud of the technique I displayed—the clutch control, throttle control, balance, line choice, etc., was all on point, so that’s a big positive (COUGH sign up for an AJ Catanzaro Moto-X Academy COUGH).

Let’s go in chronological order with the talking points of the night:

Talk about the turtle technique paying off. Phil Nicoletti was probably almost a lap down at one point and just stayed up. Being the first race of the night and with the younger guys in the 250 class, I think the percentage of riders making bad decisions was much higher. Good for Phil; I love that guy. I asked Phil right after the race for any advice. His words of wisdom were, “Don’t try and stand up.” Remind me to not invite him as a guest instructor to one of my schools...kidding, Phil.

Aaron Plessinger is so good in this stuff. Period. On TV, Daniel Blair made a very good point of saying how Aaron is able to disconnect himself from the bike. He rides tight with his knees, but allows the bike to move under him rather than correcting every little move the bike makes.

Side note: I’m loving watching this back on TV just for the pure appreciation of how difficult it was. I cannot speak from a fan’s perspective, so you guys will have to let me know if you thought this was fun to watch or not.

Wow. Eli Tomac and Jason Anderson attacking that track was spectacular to watch. Tomac looked collected and just plain fast. Anderson was his typical self, riding the track for everything it had and more.

This brings me to a little risk-versus-reward conversation. You might as well rewrite the book on risk versus reward when it comes to a mud race. With speeds being slow and mud being soft, the likelihood of injury is much less. I would say the most susceptible part of your body would be tweaking a knee. It isn’t like quadding through a jump lane, where one mistake could lead to serious injury or worse. With that being said, you could Hail Mary a section with little to no risk of injury and gain ungodly amounts of time. We saw Anderson employing this technique in the heat race, making up so much time when he was off the ground that it didn’t matter that he kept having little tip-overs. As long as you didn’t take your hands off the bars or stall the bike when you went down, this wasn’t a bad game plan.

Adam Cianciarulo putting on a clinic. If you rewatch the race footage, pay close attention to his body from the waste up: He had very little movement and was staying square with the motorcycle. Dropping the elbows leads to head movement, which equals weight transfer that you don’t want. AC did a great job of keeping the elbows up and core tight to stay centered on the bike. Kids, take notes.

How about Plessinger’s celebration?! Such a cool kid, always with a positive attitude and a smile on his face.

Again, I liked the comment Daniel Blair made about the attitude you have going into a mud race. Coming into a muddy event with a good attitude and embracing that everyone must ride the same track is very important. The mental game is 90 percent of it at our level, and it is often overlooked. I would be willing to bet that AP went into that race knowing he would win and that the other riders thought he would win, too. Many of the other riders were already defeated before the race even began.

There was carnage everywhere, which the broadcast didn’t quite do justice. The ruts were down to the wood and also some white pipe (not even sure what the white pipe was. Maybe where the transponders were? Not to mention there were some giant rocks lodged in the ruts). The fact that they were jumping anything at all on the track was quite incredible.

The best part of the race was Chad Reed’s finish line incident. Reed is a great mud rider, but is not the best with preserving his bike. In practice, I rode with him for a lap or two and he was screaming the bike all the way around the track. I’m surprised his bike made it as long as it did.

Without question, this was a race that will go down in the history books. I’d say we’re all ready for a “normal” weekend in Minnesota next week.

That’s all I have for Seattle, see you in Minneapolis.

Special thanks to AJ’s sponsors:

The Collective Experience
Offers race fans unforgettable experiences in the supercross and motocross industry with the TCE SX Fan Experience program. This program allows race fans to be a personal VIP guest of their favorite privateer racers and teams. Sign up at www.thecollectivexp.com.